Of the three founding members of BET+’s First Wives Club, Ryan Michelle Bathe‘s Ari seems Most Likely to Have Her Ish Together. After all, she’s got a handsome husband, a successful career and a closet full of take-no-prisoners power suits. But even before the end of the series’ premiere episode (read recap here), Bathe points out, we see that Ari is struggling just as much as her friends Hazel and Bree are — and as the first season unfolds, Ari’s struggle gets super real.

“Unfortunately, poor Ari has not had a happy marriage for a very long time,” Bathe tells TVLine, calling her character in the adaptation of the popular film a people-pleaser who has allowed herself to be “duped” into thinking she’s fulfilled. Eventually, she adds, “You have this life that’s constructed of all these little, tiny moments trying to please all of these other people, and these small victories, but they add up to one big zero.”

Now that all episodes of First Wives Club Season 1 are available, we thought we’d ask Bathe — who also recurs on This Is Us, alongside real-life husband Sterling K. Brown — to go deep on a few key moments from the beginning of the season (including that OMG interlude in the bedroom in Episode 1). Read on for her thoughts…

… ON KEEPING HER INNER FANGIRL IN CHECK | Working with the other wives — Jill Scott (The No. 1 Ladies’ Detective Agency) and Michelle Buteau (Enlisted) — “was love at first sight,” Bathe says. “I’ve been a fan of both of them for so long that my biggest fear was that I was going to geek out too much and then that Jill would call security. But even from the table read, I was like, ‘OK Ryan, be professional. Be professional. Don’t like act like you’ve never been anywhere, or like you fell off a turnip truck… It felt meant-to-be from the table read.”

… ON ARI AND DAVID’S SEEMINGLY PERFECT MARRIAGE | “When we meet her, she’s just given up her career as a lawyer to run her husband’s [Senate] campaign, and I think that is the catalyst: When she doesn’t have the thing that she loves, then she realizes how little love is in her life, and she finds her girls again and reaches out to them. That exposes just how little connection is in her marriage, because she has to always take it elsewhere.”

… ON THAT SEX SCENE IN THE PREMIERE | For those who haven’t seen it: Ari comes to bed while David is watching porn, but he rebuffs her attempts to join the fun. Then, when he’s ready, they have a blink-and-you-miss-it, highly unsatisfying encounter (yet David thinks he’s the man). Our question to Bathe: Why in the world is Ari putting up with this nonsense?! “I’ve thought about it, too,” she says, laughing. “And even as an actress, it’s very hard for me sometimes to put myself in Ari’s position. Because I’m like, ‘How long has it been this way? How long?!’ My God,. And I think [sex] been some version of awful probably their entire relationship.”

… ON ARI’S FLIP OUT DURING DINNER WITH DEREK, HIS LAWYER AND HAZEL | Ari drops her polished veneer during Episode 2, when Hazel’s soon-to-be-ex-husband Derek refuses to budge during a discussion of their assets. “That’s actually what I loved about the character, I loved about the show, and to [writer and executive producer] Tracy Oliver’s credit — Tracy is our fearless leader — she really was able to dig into and mine that code-switching that you do, especially when you’re a black female that’s trying to be professional… You speak a different way when you get home [from work], and you speak a different way when you’re around your girls. So it is interesting to see the mask flip — and that [Tracy] knew that the mask was flipped. That she was even able to tap into that, I think, is to Tracy’s credit.” 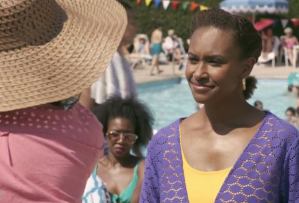 … ON WHETHER SHE’LL RETURN TO THIS IS US | “I certainly hope so,’ says Bathe, who plays Yvette — aka the woman Rebecca met at the pool who became a Pearson family friend — on NBC’s family drama. “You know what? I pitched an idea to Mandy [Moore], as a matter of fact, so I don’t know.” Bathe said her proposal had a sisterhood theme. “Obviously, Rebecca has gone through a lot, and she’s always had Jack to lean on,” Bathe explains. “I was like, I would like to see how she gets through this.” She laughs. “I mean, I’m not [This Is Us] creator Dan Fogelman. But there should be some good friends that come to her rescue that prop her up and that are like, ‘Girl, we’ve got to get you out of the house!'”