Question: What can you tell me about the Downton Abbey movie? I can’t wait until it comes out on Friday. —Sarah
Ausiello: Short of offering you plane tickets to the UK — where the movie is already in theaters, or “cinemas” — I can tell you that Andy Swift emerged from a recent screening raving about a particularly beautiful scene between Michelle Dockery and Maggie Smith, one he says that will stay with you for days after you watch it. He also warned me, “Bring your tissues,” which, in retrospect, makes no sense since he knows I’m a monogrammed handkerchief guy.

Question: When is Season 15 of Criminal Minds going to start? —David
Ausiello: With S.W.A.T. occupying its Wednesday time slot this fall, Criminal Minds‘ 15th and final, 10-episode season will premiere at midseason (maybe early 2020?). The series finale, titled “And in the End…,” promises to be “massive, explosive and transformative,” Aisha Tyler told us at the Saturn Awards. And while Dr. Lewis’ portrayer was mum on any big returns, she did tease “lots of really good surprises.” 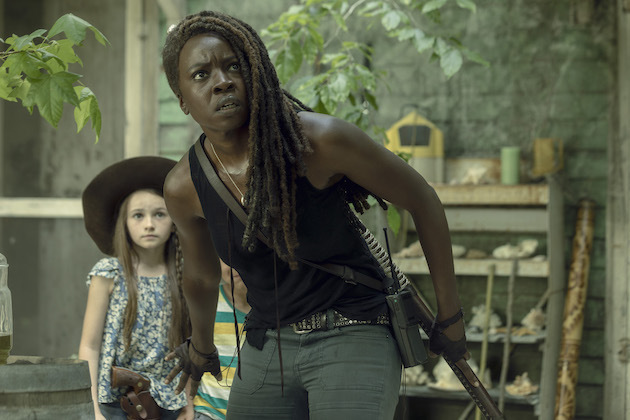 Question: Since Danai Gurira is leaving The Walking Dead, is the little girl who plays Judith leaving, too? She’s a really good child actor! —Lisa
Ausiello: When TVLine asked EP Greg Nicotero that very question on the Saturn Awards red carpet, it sure didn’t sound like Cailey Fleming would be hanging up her hat during Season 10 of the AMC drama (which kicks off Sunday, Oct. 6). “Oh, that would be so sad” if she left, he said. “Cailey’s such a rock star. I would find that very hard to believe.”

Question: I don’t think any romance is happening given that the Whisperers are on the war path, but any intel on #Donnie from The Walking Dead? I don’t know how it happened, but I find them delightful. And I’m encouraged because it seems like the actors and Angela Kang seem supportive about the pairing. — E Sanchez
Ausiello: The AMC series’ showrunner is indeed supportive of the pairing. After Season 9, “a lot of us felt there was some really interesting chemistry” between Daryl and Connie, she tells TVLine. In fact — perhaps in anticipation of exploring that chemistry in Season 10 — Kang sat down with Norman Reedus, who plays Carol’s perpetually-single bestie. “We’ve talked about, ‘What does a relationship for Daryl look like? Is he capable of it? Where is his heart?’ All of that,” she says. “Norman thinks very deeply about his character and has such good instincts, so we like to kind of check in with him and ask, ‘What are you thinking about this?'” (My guess: It’s a go.)

Question: Any hints you can give us about The Good Place Season 4? —Dee
Ausiello: The cast and producers’ lips are mostly sealed regarding the final season, but creator Michael Schur did warn us about a particularly hilarious line of dialogue from Manny Jacinto’s Jason that had even his fellow cast members struggling to keep a straight face. “Our blooper reel for Season 4 is about 10 minutes long, and — not a joke — three-and-a-half minutes of it are one line that Manny had in one scene, and the rest of the actors trying to survive it.”

Question: Any idea when we’ll see Season 2 of Netflix’s Lost in Space? —Vi
Ausiello: Maxwell Jenkins, who plays Will Robinson, told us at the Saturn Awards that filming on the reboot’s sophomore mission wrapped a few months ago, so we should be hearing about a release date “shortly.” As for what Season 2 has on tap, the young actor raved about filming in Iceland for the first couple of weeks, then teased “driving lessons for Will” and “a lot more storytelling” between the lad and Robot. 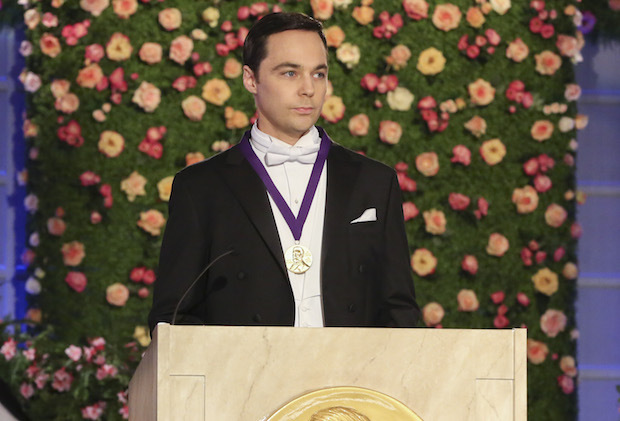 Question: Combo Big Bang/Young Sheldon query here: During Sheldon’s Nobel Prize acceptance speech in the series finale, he singled out many of the people who helped get him there — but not Dr. Sturgis, who is such a big part of his life in Young Sheldon. Why the omission? —Jorja
Ausiello: I’m gonna let former Big Bang EP/current Young Sheldon showrunner Steve Molaro field this one. “Sheldon’s speech was intended to honor the history of Big Bang,” Molaro tells TVLine.” It didn’t seem like the right time to invoke specific characters from Young Sheldon. He mentions ‘all the men in his life,’ which would include Dr. Sturgis.”

Question: What are the chances we’ll see the Big Bang kids again on Young Sheldon? —Jeff
Ausiello: Slim to none. “The goal in seeing the Big Bang characters as kids was to pay tribute to the Bang series finale, which also aired that night,” Molaro says. “So, it’s unlikely. But I’ll never say never.”

Question: Good Doctor fan, here. Any hope for Shaun and Lea ‘shippers? —Diane
Ausiello: This season, Lea plays the “supportive friend and roommate,” according to showrunner David Shore, who adds, “She considers Shaun a friend. Does she have deeper feelings for him? I think that’s an open question that we’ll explore as we go forward.”

Question: Any intel on Claire’s storyline on The Good Doctor this season? —MJ
Ausiello: Claire’s bipolar mom Breeze (returning guest star Sharon Leal) will resurface, posing “some significant challenges” for the surgical resident and forcing her to take a good hard look at “who she really is and who she thinks she is,” teases Shore.

Question: What do you know about Dynasty Season 3? I’ll take anything. —Charlotte
Ausiello: You might want to be careful what you wish for, especially if you’re a fan of Fallon and Liam’s relationship. New showrunner Josh Reims says that the drama surrounding Trixie’s death will bring “another potential romance” into Fallon’s life. And given the recent casting of Ken Kirby as Trixie’s brother Evan, well… let the speculation begin! 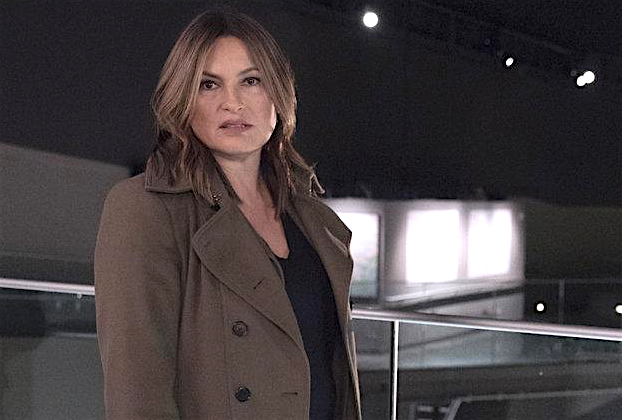 Question: I can’t wait for SVU to come back. Gimme something to tide me over! —Pat
Ausiello: SVU beat-coverer Kim Roots tells me that the second episode of the season features prominent callbacks regarding a polarizing recurring character and then she paused, arched her eyebrow and bellowed, “You better not put that in Ask Ausiello!”

Question: I know things will still be a little rocky between Dean and Cas at the start of Supernatural Season 15, but how long will it takes things to mend? Will Dean apologize? —Lindsay
Ausiello: We’ve got some bad news: “If you look at the end of last season, Sam and Dean and Cas were not on the best of terms,” co-showrunner Andrew Dabb tells TVLine. “And that, like so much, is not something that’s going to rectify itself right away.”

Question: Anything about The Flash‘s Caitlin Snow and Killer Frost? —Clarice
Ausiello: “Killer Frost is going to explore her humanity in ways we haven’t seen before — and sometimes that means her being on the team more than Caitlin,” showrunner Eric Wallace tells Matt Mitovich. “That doesn’t mean Caitlin is gone — obviously she is integral to the story, because she has the connection to our Big Bad, Bloodwork (aka Dr. Ramsey Russo). But some of the fun, some of the sadness, and some of the mysteries from Killer Frost’s past that we haven’t really been able to deal with, now we can.” (Speaking of Dr. Russo, played by Sendhil Ramamurthy, Wallace says it’s “a definite possibility” that Killer Frost will have her own take on Caitlin’s handsome colleague!)

This AAnd That…
♦ Empire: A major final season plot involves Andre spearheading production of a feature film that chronicles Empire’s rise in the music business — and wait until you see who lands the coveted role of Lucious Lyon. 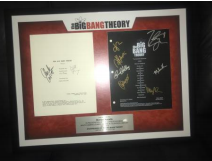 ♦ Big Revival News: My latest TV swag-for-charity auction just went live at eBay and it is chock full of priceless treasures from Big Bang Theory (pictured), The Americans, Mad Men, Gotham, The Walking Dead, RuPaul’s Drag Race and so much more. Hurry up and get bidding!
♦ Grey’s Anatomy: Teddy’s maternal instincts will be slow to kick in. As Kim Raver teases (and these first look photos confirm), “Krista [Vernoff] and I talked about, ‘Wouldn’t it be great to see Teddy as this badass cardiothoracic surgeon, but she’s never really had to delve into motherhood?’ Because that is literally a totally different world for her. I thought it’d be interesting to see her not know how to manage something when she usually is on top of things. So, the comedy with that has been fantastic… I just did a scene with Greg [Germann] and Kevin [McKidd] and Caterina [Scorsone] and the babies, all together. You can only imagine! It was a quintessential Grey’s explosion of tears and laughter.”
♦ The Conners: There’s a strong hint in this season’s second episode that Darlene will retain the services of a shrink in the very near future and I’m predicting this will be one of my favorite storylines of the fall.