You didn’t think Power was going to go an entire season without giving Lela Loren more to do than lie on a morgue slab, did you?

In this week’s episode, Loren’s Angela reappears for the first time since her surprising death in the season premiere. No, she’s not suddenly ejected from Witness Protection or anything like that. (I know some of you were still hoping, and I can’t blame you for it.) Instead, the dearly departed AUSA Valdes shows up as a manifestation of Ghost’s really, really guilty conscience and gets him to begrudgingly acknowledge some unfortunate truths about himself.

It’s a good thing Ghost is distracted, though, because on the day when he finds out what goes down among Tommy, Vincent and Tariq in the hour? We’d all better assume crash positions.

Read on for the highlights of “Why Is Tommy Still Alive?” 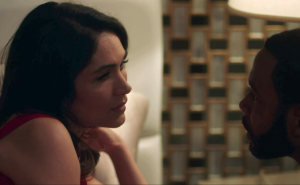 A VISION IN RED | Ghost dreams of Angela, and when his alarm clock wakes him up in the morning, he’s surprised to see her in his bedroom. “I’m trying to be the man you want me to be. It’s just s—t keeps getting in the way,” he tells her mournfully. “You keep getting in your way,” she counters, and I instantly decide that I am Team Guilty Conscience Angela if she’s here to call Ghost out on his nonsense. She goads him that he’s all talk, no action: “You say you feel guilty for what happened to me. So why is Tommy still alive?” Just then, his phone buzzes: Jason wants the money Ghost owes him.

Elsewhere, Proctor’s ex meets with Saxe, who’s increasingly frustrated with her inability to capture anything incriminating on Elisa Marie’s keychain bug. But when she mentions that Elisa Marie told her that a “big, scary white guy with blonde hair” named Tommy swung by her dad’s place that week, Saxe is very interested.

FORGOT ABOUT DRE (BEING TOTALLY BACKHANDED) | In related news, Proctor is trying to broker an arrangement between Ghost and Dre — though the fact that Ghost tries to stab his former protégé in the eye with a pen the minute he arrives at Truth makes that tough. The lawyer talks him down, saying that the AUSA’s office is moving forward with the case that put them all in trouble in the first place, and that Dre has some important information. “They still have a witness ready to hang you,” Dre coughs out, rubbing his throat from where Ghost had him pinned against the wall. He adds that the woman is the girlfriend of someone he killed: “She saw you on TV. She knew it was you.” Ghost doesn’t take the intel seriously… until Dre mentions the name Miguel Alvarez (aka Maria Suarez’s dead boyfriend).

Proctor says the situation is fortuitous for them: The Feds want Dre to feed them information on Ghost, which means Team St. Patrick can control the narrative. Ghost still isn’t 100 percent on board, so he informs Dre that they’ll be listening in to every meeting with Saxe via the wire he’ll wear. “You want to earn our trust?” Proctor later tells Dre. ” Find me that f–king witness.”

TRYING TO KILL TOMMY, TAKE TWO | Perhaps galvanized by Guilty Conscience Angela’s question, Ghost sets out (again) to kill Tommy. With Tate’s help, he closes the city block outside Tommy’s warehouse at the exact time he knows Tommy’s got to rendezvous with his supplier. That alone should have trapped Tommy and his guys in the building, making them all the easier to kill. But Tommy still has that ambulance in his possession, so they all put on the uniforms again, turn on the sirens and cut their way through the traffic like it’s not even there. An infuriated Ghost runs to his SUV and guns it, T-boning the ambulance out of nowhere and shooting at Tommy through the driver’s side window. But 2-Bit fires back from the passenger side, which buys Tommy enough time to throw the heavily damaged vehicle into reverse and cruise to safety.

A thwarted Ghost tries to follow, but two detectives zoom up and make him get out of the car with his hands up. Turns out, they’re cops who are loyal to Tate, and the wannabe governor had them tail Ghost after he requested the block shutdown. They deliver him to where Tate is waiting, in Ghost’s office at Truth (just to make him feel bad), but Ghost growls that Tate has put even more people in danger and that he can’t protect everyone. (Side note: I do love watching Tate try to best Ghost and repeatedly get slapped in the face and told to sit down and let the adults handle things. It’s very satisfying.)

GHOST AND MARIA SUAREZ MEET AGAIN | During Dre’s meeting with Saxe, Proctor and Ghost realize that the Fed is using Dre as an off-the-books informant. And we soon realize that Dre is double-crossing just about everyone: He follows Saxe to Maria Suarez’s apartment, then delivers the address to Ghost. BUT THEN, when he helps Ghost gain access to the apartment while Maria is home, Dre lets the Feds know that Ghost is with the witness. Saxe urges him to stall until the FBI can get there, but it turns out to be for naught: Though a sobbing Maria certainly thinks Ghost has come there to kill her, he merely apologizes for murdering Miguel, then drops a fat envelope of cash on her table as reparations.

“I took someone from you. I can’t change that,” he says. “All I can tell you is I’m not that man anymore.” He quietly adds that she should do whatever she wants, then he leaves — and Dre hastily texts Saxe to call off the agents on their way to swarm the place. The whole thing is an incredibly close call, and I’m pretty sure Dre sweated through every layer he was wearing, but Ghost doesn’t seem to be any wiser.

HOW TASHA GOT HER GROOVE BACK | What’s Tasha up to? Well she’s opened her daycare (how the heck are there so many kids already enrolled?) and she nearly gets it on with a hot dad named Quentin, but pulls back because she doesn’t want to be the kind of woman who has desk sex with someone with whom she’s exchanged three sentences. But he likes her, and he’s not scared off when she pumps the brakes… or when Ghost later shows up and glowers at him.

FAMILY MATTERS | LaKeisha spends much of the episode babysitting Tommy’s ma Kate, who’s staying at their place while her house is fumigated. After Kate mentions how things with Holly ended in a “bad breakup,” Keisha keeps trying to draw her out on the subject. But they keep getting interrupted, like when Cash comes home missing his backpack and sporting a split lip: He got jumped on the corner by some kids. Furious, Keisha marches downstairs and nails those little jerks to the wall… which later causes Kate to warn Tommy that Keisha will always choose her son over everything and anyone else. This angers Tommy, who throws her out. At the end of the episode, he tells Keisha that he thought Ghost was his family, but that she and Cash are all he ever needs. Sounds sweet, right? But he does it in that Tommy way — which is to say, like a psychopath — and it makes me very afraid for her.

TARIQ IN TROUBLE | Let’s go to Choate, where Vincent is demanding that Tariq provide more pills to sell. The desperate teen travels to Tommy’s warehouse, breaks in, narrowly avoids being caught and walks out with duffel bags full of product. But all it takes is one conversation between Tommy and Vincent, and Tommy is up in ‘Riq’s dorm room, demanding to know what’s going on. Tariq lies that Kanan gave him the pills, and Tommy instantly softens but is firm on the idea that Tariq needs to get out of the game immediately. Tariq promises he will. We all know he won’t.

Later, when he meets with Vincent again, Tariq is outed as Ghost’s kid. Vincent demands that ‘Riq show up with even more product soon. After Tariq leaves, the crime boss says that having Ghost’s son and Tommy’s godson under his thumb can only be a good thing. Man, this kid is screwed. On the plus side, though, Effie kisses him in his room while they’re studying.

LINDSAY’S LAST MOMENTS | Proctor brings Elisa Marie to Lindsay’s on the same day that Lindsay gets her bar results: She didn’t pass. He doesn’t know this, though, as he waxes positive about how he’s gotten a five-karat ring for his girlfriend and how all of their futures look bright. The moment he leaves, Lindsay ransacks drawers and purses for some leftover coke, then texts her dealer that she needs a delivery pronto.

Not long after, Elisa Marie calls her dad in a panic, because her mom is pacing the living room, spouting legalese in a drug-fueled mania. When Lindsay starts clutching her chest and saying she’s in pain, Proctor hesitates in calling 911: If EMTs show up, they’ll have to report her relapse. But then it turns WAY darker. He realizes that if she dies, there’s no one to fight for custody of Elisa Marie. “I won’t let you take my little girl from me,” he says. And then he watches, doing nothing, as she foams at the mouth and dies. (But he has no clue that the keyring on Elisa Marie’s backpack, which is sitting just a few feet from Lindsay’s cooling corpse, likely recorded the whole exchange.)

TRUTH IS MORE THAN JUST A NIGHTCLUB | Back at the penthouse, Ghost confesses to Guilty Conscience Angela that he lied to her about killing Terry Silver and that he’s responsible for her death, too. But he wants credit, he says, for not killing Maria when he could have.

“You will,” is all she replies.