THE PERFORMANCE | It was tremendously difficult to see rock-steady Aunt Violet get shaken by both the truths spilled in Nova’s book and Jimmy Dale’s unwanted reappearance that followed. But this week, Lifford in a gripping sequence showed us Vi emerging from that fog to read her abusive ex and reclaim her power..

Vi looked broken, words barely able to flow out of her, when she showed up at Jimmy Dale’s to literally rid herself of the memories that chronicled their dark past. “You need to carry the burden of what you did to me; not me,” she told her ex. “I am holding you accountable for the p-… the pain you inflicted on me.”

As nearby Nova (interestingly, as the catalyst for much of this) reached for and held her hand, Vi kept herself together through the exchange. But when Jimmy Dale smashed the memory box to pieces behind her, Lifford signaled that a switch had flipped inside Aunt Vi, as her eyes widened and a confidence washed across her face. Surveying Jimmy Dale’s shanty-like digs, she sniffed, “You’re the one that had to clean up to come see me, because you ain’t nothin’. Your prime is over and all you got is nasty words.” Stepping back up onto the porch, she got in his face to declare, “I won. I got the good life. I got the money. I got the house, the business, the respect. Love. You just an old, worn-out dog, You ain’t s–t.”

Lifford’s triumphant hour wasn’t over, though. In a scene that immediately followed, Vi intercepted Jimmy Dale’s latest, banged-up victim and convinced her to turn heel and break the cycle (“I’m you, 30 years ago”). And then there was the sweet moment at the diner with Darla, who gifted her with her 30-day chip. Finally, Violet kicked back at home to announce that the time for looking back, and for secrets, was over. “You did good, Aunt Vi,” Nova noted. And we wholeheartedly agree. 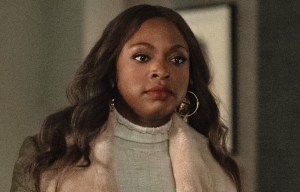 HONORABLE MENTION |  Power‘s Tasha St Patrick — excuse us, Tasha Green — is a woman on the verge, and we are here for it if it means Naturi Naughton gets to do the kind of work she did in Sunday’s episode. As Tasha’s frustration with Ghost simmered to a boil, Naughton had her character stride into the St. Patricks’ old apartment, demanding that her soon-to-be-ex-husband give her the spousal support she deserves. Naughton played her long-suffering character with a blend of anger and regret, infusing Tasha’s tirade with a threatening tone that put Ghost on notice. But when he all but admitted to killing Tasha’s lover, Naughton suddenly shifted, Tasha’s grief flowing to the fore before the character quickly snapped back to get-what-I-want mode. An unsettled Tasha may not know what’s ahead of her, but we can’t wait to watch Naughton tackle every minute of it. 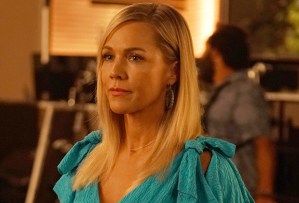 HONORABLE MENTION | Kelly Taylor may have been a bad girl, but Jennie Garth has proven herself a funny lady on BH90210, playing a flightier, less composed version of her real-life persona. And from her side comment to Tori Spelling about plastic surgery to her heated sit-down with Jason Priestley (“I’m an actor, we’re all narcissists!”), Garth was in rare form on Wednesday’s episode — and we’ll be darned if we didn’t feel legitimate chemistry between her and Priestley again. Garth’s ability to fake an interest in golf could use some work, but her comedic chops are definitely above par.