Spoiler alert: James Eckhouse did not burn down The Peach Pit on BH90210. In fact, the iconic diner is one of the few set pieces that wasn’t destroyed in last week’s fiery cliffhanger. As for the arsonist, it turned out to be Johnson Deitz, the dude we met in Episode 2 who owned Donna’s red dress.

Was it a disappointing reveal? Absolutely. But at least the show made up for it by having Tori initially suspect Jamie Walters, the actor who played Donna’s abusive boyfriend Ray Pruitt in Season 6. Not only did it work on a meta level — Walters’ career really did take a hit when fans turned on him over Ray’s actions — but it also led to Shannen admitting that she doesn’t know how long the show continued after she left. (“Siri, how many seasons of 90210 were there?”)

With that big let-down of a mystery behind them, the co-stars were able to move forward and finish the pilot. Well, one scene from the pilot. But given their track record thus far, Fox will take what it can get.

* Upon realizing that her situation with Christine was even more complicated than she realized (consent forms?!), Gabrielle decided to come out to her friends as “undeclared.” 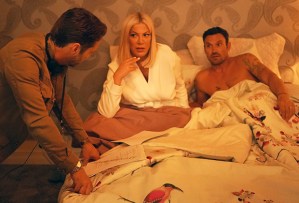 * Her bravery inspired Brian to also come out… as a dad. (For the record, Tori was not-so-secretly relieved at the thought of Brian being gay. After all, what other reason could be behind their uncomfortable love scene?) Zach was glad that Brian decided to tell people, but all that could change if it’s discovered that he’s lying. And about that guy who stole Zach’s water bottle — do we think he was a private investigator hired to corroborate Zach’s story, or a tabloid reporter looking for a major scoop?

* Jennie and Wyatt remained hot and heavy this week, as did Ian and Anna, who finally kissed… and also signed a consent form.

Your thoughts on this week’s BH90210? Hopes for next week’s finale? Drop ’em all in a comment below.