In Sunday’s Fear the Walking Dead, Charlie went home… or at least to a synagogue that she thought might make a nice home. But the temple turned out not to be quite the right place for John to hang the yarmulke that he was given by Rabbi Jacob Kessler, much less his regular cowboy hat. How come? Read on (or you can just wait for the documentary that Al is sure to make about it)… 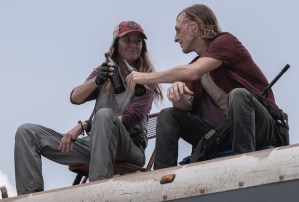 ‘WE’RE LOCKED UP TIGHTER THAN A FIREMAN’S SPHINCTER ON THE FOURTH OF JULY’ | As “Ner Tamid” began, the rabbi discovered Charlie hiding in a car outside Temple B’nai Israel and suggested that the light that gave the episode its title — a light that represented God — had led her there. “Maybe there’s something you need here,” he said, indulging in the kind of on-the-nose dialogue that we’ve reluctantly come to associate with the show. “Maybe you’re here because you’re finally going to find it.” And what are the odds? There was something that she needed there and quickly came to believe that she had found: a home. So when the car battery that charged the light started to run out of juice, she radioed John and June to bring spares and check out their new address. She wasn’t fazed by Jacob’s theory that a gap in his fence was letting walkers stroll up to the door; she and her peeps could fix it, no sweat (all while videotaping the effort, I’m sure).

When John and June arrived in the SWAT van, the cowboy tried on a yarmulke but still looked “goyish,” Jacob admitted. “Kind of like the Pope.” So John just slapped his Stetson on top of it. Meanwhile, June found myriad reasons to shoot down the temple as a possible HQ, prompting Charlie to admit that she’d run away because she didn’t want to live anymore like she had with Mel and the Vultures. That was a different situation, June insisted. It had gone bad; their new arrangement wouldn’t. Uh-huh, Charlie replied. “I thought the same thing then.” Back at the convoy, Sarah was busy discreetly flirting with Dwight — Mo Collins doing a sweet job of holding her gaze a telling millisecond too long — when they spotted Logan’s gang approaching. Bring the SWAT van ASAP, Sarah radioed John and June, interrupting their argument with Charlie over whether the convoy could convert, so to speak.

‘SAY A PRAYER FOR US’ | Of course, just as John and June went to take off, Jacob’s fence collapsed, letting in a horde of walkers. And not just any walkers, either — his congregation. When they’d run low on rations an eon ago, he’d gone on a supply run, only to find them all turned by the time he got back. Regardless of who they were, John and June still had to go save Sarah and Dwight, who’d broken away from the convoy with the tanker. But the lovebirds only made it as far as the fence before winding up trapped atop a car surrounded by walkers. Since the rabbi wouldn’t shoot his congregation, June suggested that Charlie remedy the situation the way Al would: by doing an interview about it. Juuust kidding. June suggested Charlie handle it the way Mel would’ve — which was as fine an idea as it was triggering for the teen. To get her on board, Jacob admitted that he hadn’t left his congregation to get supplies, he’d left because he’d lost faith. “I’m alive,” he said, “because I didn’t believe in God.” Though Charlie was gutted by the revelation, she set in motion a very Vultures-like plan: She had Jacob blow the shofar to lead the walkers away from John and June and into the temple, where they soon put out the light. (Subtle, Fear TWD. Very subtle.)

Running from what Sarah called Logan’s “d—k squad,” she and Dwight received a call from Rollie, the guy to whom the former Savior had given a second chance back in “210 Words Per Minute”; obviously, he hadn’t seized the opportunity to be less of an asshat. Soon, Sarah and Dwight ran out of gas. “This ain’t bottomless mimosas,” she told “Babyface.” Even though they were in a tanker, it wasn’t attached to their tank. D’oh! “It’s been fun riding with you,” Dwight told her as Logan’s people surrounded them… and then drove off. What the… ? Yeah, of course, John and June arrived in the SWAT van just in time to scare them off. Later, June blamed herself for Charlie’s flight; maybe she was wrong to hold out for an ideal home that might not exist. But… but that’s faith, marveled Jacob, who hit it off right away with Sarah, whose last name turned out to be Rabinowitz. “We’ll keep driving, we’ll keep helping, we’ll find the place we’re meant to be,” concluded June as if there might have been even an instant when we could’ve forgotten what the show was about. As the hour drew to a close, the “big” twist turned out to be that Logan had discovered the location of Clayton’s oil fields through Al’s tapes, and that was why his peeps hadn’t fought for the tanker. (Because let’s be real — John and June were never going to gun down a bunch of bad guys just to keep their refill truck and its contents.) “Hang onto your hat, Doris,” said Logan as he and his henchwoman drove into the “Lonesome Quarry.” “We’re about to buy ourselves a ticket to the promised land.”

So, your thoughts about “Ner Tamid”? Jacob? I’d have liked to have felt a greater (OK, any) sense of danger, but at least I like Sarah and “Babyface.” Mo Collins is great at hinting at depth beneath the Sarah-isms, don’t you think?