I called it. Back in Episode 7 of Fear the Walking Dead’s Season 5, I guessed from the way that Grace touched Morgan’s arm that there was a romance in the offing for the two of them. And in “210 Words Per Minute,” that love story came thisclose to actually beginning. What — or should we say who? — got in the way? Read on and find out. 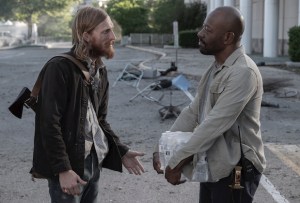 ‘I JUST WANT YOU TO DO ONE THING: KILL ME’ | As the hour got underway, we heard a message from a guy named Chuck who was holed up in FTWD’s version of Stranger Things’ Starcourt Mall. He’d been bitten and hoped that Morgan & Co. would dispatch him and bury him under the stars. And, of course, they would. Dunno if you’ve heard — they mention it, oh, every few seconds — but helping people is kinda their jam. Trouble was, when Morgan, Grace and Dwight arrived, Chuck, or Zombie Chuck, wasn’t, as he said he’d be, in the security office. No, he was likely among the mass of walkers on the first floor. “You two really thinking about going down there to kill somebody who’s already dead?” asked Dwight. Maybe he was why the group so often had to repeat that their mission was doing good deeds. Yes, Dwight. Yes, they were. But before they could, Grace passed out cold, which she explained could be a sign of radiation poisoning or exhaustion or any of a dozen other things. While she recovered at the mall with Morgan to watch over her, Dwight would go meet up with the caravan and bring it there for a shopping spree. With Logan hitting truck stops right and left, our heroes were going to need everything that they could possibly carry out of the mall.

Before Dwight took off, he radioed Daniel with the exact route that he’d be taking — a boneheaded move, it seemed at first, since he knew very well that Team Logan was always eavesdropping. But it turned out that Negan’s former henchman had wanted to be followed so that he could appeal to the better nature of whichever of Logan’s flunkies apprehended him. And conveniently enough, it was only one guy who came after him; had he been caught by a group, he might have been in deep s—. Anyway, Dwight made a nice speech about how easy it was for good intentions to go bad in a zombie apocalypse, and how ultimately, everyone had to ask themselves whether they were being an a—hole because of the demands of Armageddon, or were they just an a—hole now? “I’ve always been an a—hole,” the guy replied most unfortunately. “At least according to my mama.” So that didn’t really work out too hot. Later, the guy thought that he’d figured out exactly how to get Dwight to reveal the location of the oilfields: Having seen Morgan’s informercial, he was sure that burning Honey’s letters would loosen Dwight’s lips. And he might’ve been right, too. But a walker happened by at just the right moment — they so rarely miss their cues! — giving Dwight a chance to get the drop on his captor. And the former Savior was so determined to no longer be an a—hole that instead of put a bullet in the guy’s head, he left a challenge there: Go forth and be somebody else, somebody better. 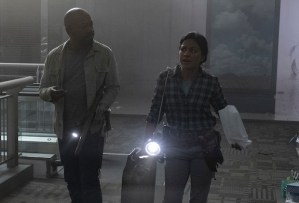 ‘I WAS HOPING THEY’D HAVE A CINNABON’ | Back at the mall, Grace, sick of wondering whether every sniffle or fainting spell was the beginning of the end of her, decided that she had to, had to, had to get first to the generator, then to the mall’s Urgent Care. If she did, she could find out once and for all whether she was sick. Needless to say, Morgan was volunteering to help before she’d even asked for any help. To divert the walkers from their path, he drove around a remote-controlled toy truck on the first floor. But when Grace broke away to dispatch a zombie that she thought was (but wasn’t) Chuck, they were forced to seek refuge in a health-food store. There, although she opened up about her thwarted love of horses, and he talked a little about Duane and Jenny — they had been the only people to ever make him smile the way he had when he was driving the toy truck — he wasn’t keen on letting her help him let go. “It’s not the kind of problem you fix in a day,” he argued. After walkers broke into the shop, the duo hightailed it to the generator, where Grace told Morgan that she envied him: He’d been brave enough to have a family, whereas she’d never had the courage to act on her feelings for anyone.

Once the twosome got the power on, they made their way to Urgent Care, only to set off its alarm breaking in. When they fled to the security office to switch it back off, they spotted Chuck on a monitor — on the roof, alive. Turned out, he’d headed up there to see the stars one last time rather than merely be buried beneath them. “Just my luck — cloudy night,” he cracked. After Grace used a toy to project stars on an awning overhead, thus granting his last wish, we cut to the morning after. Chuck was buried beneath the toy, and Grace had made a big decision: She didn’t want to know any longer if she was sick. Chuck “didn’t wanna die here in this mall,” she said. “I don’t want to, either.” She wanted to live, roll the dice and really live. And as she rode the carousel with Morgan — the kind of smile on his face that only Duane and Jenny had ever been able to inspire — it looked like their romance was kicking off in earnest. Only he got spooked. When the caravan arrived, Dwight allowed Daniel to give him a shave and a haircut — so yay! One step forward. But Morgan told Grace that he wasn’t going with the gang, he was going after Al — dang it! One step back. Grace was clearly crushed, and the tears in Morgan’s eyes as he put her in rearview suggested that he was, too — at least about how close he’d come to letting go of the family he’d dearly loved and lost.

What did you think of “210 Words Per Minute”? Are you down with a Morgan/Grace romance? What do you think of Dwight 2.0 — and that makeover? Scars be damned, he looked good, no? Hit the comments.