Warning: The following contains spoilers for Sunday’s Fear the Walking Dead. If you’ve yet to watch and prefer to be surprised, move away as if a radioactive growler is lumbering toward you.

I think we all felt pretty confident going into Sunday’s Fear the Walking Dead that, despite the fact that “The Little Prince” left several characters in jeopardy, no one was actually going to bite the dust. So color at least me stunned that “Still Standing” appeared to sign a death warrant for not just a character but one of the ones we really care about. Whose fate was sealed? Read on… 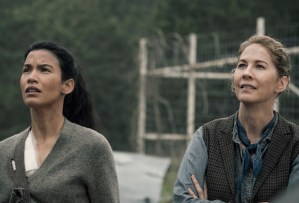 ‘OLLY OLLY OXEN FREE!’ | As “Still Standing” began, Alicia, armed with her sharpened Browning M1919 heat baffling, made her way to the kids’ hideout through the walker blockade as easily as a veteran concert-goer navigates a mosh pit to reach the front row. Once there, she was told for the umpteenth time by Annie that the youngsters wouldn’t be taking off with her. Why wouldn’t she just take the hint? “I have to do something good to make up for what I did,” Alicia said, also for the umpteenth time (though at this point I might have lost count, it could have been the gazillionth). Later, as the kids worked to repair the blockade that their would-be rescuer made a mess of, some growlers broke free and chased them back to camp and the rickety fence that surrounded it.

Meanwhile, Morgan radioed Grace in hopes that she’d drive into the fray and save Strand and Charlie. Since Grace was busy trying to hook up the generator to buy them all some time to fly away before the reactor melted down, she instead directed Morgan to, basically, her house; he could pick up a vehicle there. After he saved Strand and Charlie, he gave them the car and took off to retrieve Grace. The generator had conked out, so they had 12 hours left, a day at most, and he knew she was lying when she said fine, she’d meet him at the truck stop once she’d repaired it as best she could. At the same time, Al and June discovered that their getaway plane had been leaking all this time and was now as dry as Season 2’s desert. Luckily, Al not only knew where they could score a bunch of aviation fuel, the trip to obtain it would give her a chance to confide in her pal that she’d met someone that she could never see again. I’ll let you guys take the lead on scoffing at the way they came to a dead stop to have this conversation even though every second they spent chatting was another second closer to the nuclear reactor melting down. 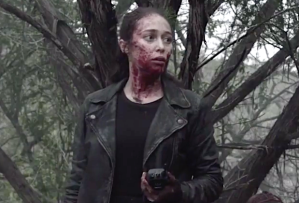 ‘THIS, I CAN DO’ | At the kids’ HQ, Alicia was stunned to learn that her captors’ guns weren’t loaded — they had a total of no ammo with which to take down the pack that had followed Annie and Max home. But that was OK, insisted Alicia. She could singlehandedly beat back the horde as the youngsters scurried to safety. And, as a matter of fact, she did. Unfortunately, in so doing, she got knocked down by a radioactive walker and covered in his blood when she dispatched him. In other words, she was contaminated. In other words, what the actual hell? The show is really going to kill off one of its few remaining original characters? Alicia’s our Buffy Summers. She’s gotta live.

Well, at least she convinced the kids to live. By all but quoting Kenny Rogers and saying, “You gotta know when to fold ’em,” she got Annie to agree to take her peers to the truck stop. “I don’t know what you did, but you made up for it,” Annie radioed Alicia. “You can let go, too.” Man, this one’s gonna hurt. Elsewhere, John, anxious to get back to June and get himself and Dwight back to the plane before it was too late, revealed Sherry’s goodbye letter to her husband. And he took it pretty well, all things considered. Focusing on the “Find something to live for and live” part of the note, Dwight announced that he’d help John and his do-gooder friends. Maybe if he did, along the way, he’d still find his Honey. “Impossible s— happens,” after all.

‘ALICIA… SHE WAS PRETTY CONVINCING’ | Picking up Grace whether she liked it or not, Morgan pointed out that she wasn’t dead, which I suppose is always helpful to know. “So I’m not gonna let you act like you are,” he added. That night, he gave Eastman a shout-out, and she deduced that she and Morgan had the same problem: “You think everyone else’s life is more valuable than yours.” And from the way she touched his shoulder, I couldn’t help but wonder if the widower was about to get a love interest.

At the truck stop, Strand and Charlie arrived, followed by Annie, Dylan, Max and the post-apocalyptic touring company of Annie. As for Alicia, she was still out in the woods playing Pied Piper with growlers. When Morgan reached her on the walkie-talkie, she lied that she was OK. In response, he suggested — talk about a day late, a dollar short! — that maybe helping people wasn’t the only reason they were still standing. Maybe they were supposed to live their own lives, too. “Now ya tell me,” she somehow refrained from saying. As reactor sirens began to sound, Alicia remained mum about her location. Clearly, the midseason finale drew nigh. So, what did you think of “Still Standing”? Is Alicia really toast? Could she be spared? Hit the comments with your thoughts/fears.