Did Homer Simpson write Sunday’s episode of Fear the Walking Dead? Given the pivotal roles played by both beer (Homer’s favorite beverage) and a nuclear power plant (his place of employment), it certainly seemed like he could have. Mind you, there was nothing funny in the slightest about the new messes in which Morgan and his merry band of do-gooders found themselves as the hour drew to a close. How dire were their straits? Read on… 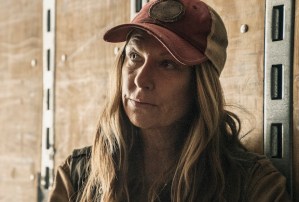 ‘WE DO STILL HAVE SOMETHING TO FIGHT FOR — WE GOT EACH OTHER’ | As “The Little Prince” began, Morgan was giving the kids a Rick Grimes-worthy pep talk about how they were going to defy the odds and get out of there. His plan? They’d repair the plane that Al had crashed in the season premiere. (Luckily, everyone knows how to fix everything on this show, from radio towers to planes.) Lucy was extra sure that they’d manage to pull off the feat since Dylan had started quoting from The Little Prince (“You can only see with your heart, not your eyes”) and removed his glasses to view the wreckage before giving the project the thumbs-up. Unfortunately, despite the gang’s hard work, the first time Al turned on the engine, a propeller went flying off, injuring… Well, since clearly we are headed for imperiled whippersnappers in the midseason finale, the projectile injured no one. Meanwhile, Strand, Sarah, Wendell and Charlie were faring no better in their attempts to fix Daniel’s plane — even after Sarah requested a beer. “I work better with a 5 out of 10 buzz,” she said, inadvertently echoing my preferred method for writing recaps.

While all of that was going on, Dwight took to the field to search for Sherry with John and make vague references to the way Honey had saved his life, if not his complexion, by becoming Negan’s “wife.” Dwight also recalled, for expository purposes as much as John, that Daryl had told him to find Sherry and make it right. If Dwight was going to accomplish even that first item on his to-do list, never mind the second, “I need some of your luck, John.” And right on cue, he got some of it: John spotted a diner check that Honey had signed; her name had just been obscured by the blood of the guy whose brains someone had blown out to steal his food. Nonetheless, John was able to let Dwight read his missus’ missive by putting a piece of paper on top of the check and then gently pencilling over the paper to reveal the indentations of her letter. Turned out, Dwight had been searching on the wrong road all this time! Back at the truck stop, Morgan received a call from Grace in which she asked for his group’s generator to cool the fuel at the second reactor. It wouldn’t “fix everything,” as Alicia hoped, but maybe it would buy them enough time to fix the plane. 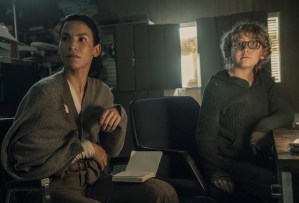 ‘I GET IT’ | Back at Daniel’s, Strand was stymied. As Sarah put it, their friends “got engines without props, we got props without engines. We got all the pieces [to fly a plane], we just need to put ’em together somehow.” All hope appeared to be lost when… talk of Jimbo and a picture of his Brewsweek magazine cover gave Sarah and Charlie a completely bonkers idea. (More on that in a moment… brace yourselves, though.) At the truck stop, Annie spotted Morgan leaving with Grace to install the generator and announced, to Dylan and Max’s chagrin, that they and their peers were leaving. Whatever happened at the reactor, she was sure they’d be safe just as they had been before. Hoping to change the girl’s mind, Alicia offered her a car if she’d just tell her why she wouldn’t stay and fly away with the grownups. In response, Annie shared the story of how a supply run from the camp had led back to it a herd of walkers that the kids’ parents hadn’t realized were radioactive until they’d dispatched them and become sick themselves. When Annie had snuck back to camp, her parents wouldn’t even open the door to her; they merely made her promise to protect her brothers.

Though Alicia understood, she still challenged Annie. “Just make sure you’re doing what [your folks] really asked.” In other words, “Are you surrounding yourself with the dead to protect your brothers or because it’s easier than surrounding yourself with the living?” In the field, Dwight and John found a car whose VIN number matched the one on the last registration Sherry had written on. They were close! While Dwight searched the house at which it was parked, John found in the vehicle a note. Uh-oh. A note in which Sherry said she’d killed the man at the diner and didn’t want Dwight to kill himself searching for her. So stop, she beseeched him. “Find something to live for and live.” Later, Dwight was so excited by the prospect of reuniting with Honey that John didn’t have the heart to tell him about the goodbye note. Elsewhere, as Morgan and Grace neared the plant, she tricked him into getting out of the truck so that she could leave him behind. This was her mistake to unmake as best she could, she argued, and she refused to let him put himself at risk to help her.

2019 Fall TV Preview: Guide to All the New Comedies and Dramas

‘ROADS ARE NOT A NECESSARY INGREDIENT OF THIS JOURNEY’ | As the hour neared its conclusion, Strand radioed Lucy that he and Charlie were on their way with propellers. But how?!? In a hot-air balloon in the shape of a bottle of beer that Wendell and Sarah had taken from Jim’s brewery! (First Season 4’s singleminded crocodile, now this? And isn’t it fortunate that of course Victor knows how to fly a hot-air balloon. I can barely hold on to a freakin’ balloon!) Alicia and Lucy were eager for the kids to behold the spectacle, but alas, they’d already vamoosed. Immediately, Alicia took off to bring them back to the truck stop — though that meant getting past a roadblock made up of enough growlers to fill half a dozen K-pop boy bands. And maybe it was for the best that the kids weren’t watching, because Strand and Charlie soon ran out of fuel and crash-landed — totally unharmed — smack in the middle of a contaminated area full of walkers. As Morgan raced to their rescue — well, as fast as he could race on foot — the radioactive zombies approached from all sides. So, what did you think of “The Little Prince”? Morgan’s new stick? A mop handle? Really? Let rip your thoughts in the comments below.