Tommy Egan couldn’t make it through the Power premiere without narrowly escaping a hail of bullets, and Ghost — aka the shooter — isn’t the kind who tends to let things go. So as this week’s episode approaches, should we be worried for the hotheaded drug boss?

Sunday’s installment of the crime drama (Starz, 8/7c) finds Tommy hiding out in the wake of Ghost’s hit, which was payback for the bullet that wound up killing Angela. And though Tommy’s former best friend might not have hit his target (R.I.P. Jason’s henchman, Stanomir), that doesn’t mean that he’s not preparing for another attempt.

“I would argue Tommy is a methodical man, but he’s not a patient man,” Sikora tells TVLine. “Tommy is not good at playing the long game, where Ghost is.”

However, Tommy also adapts quickly and learns on the fly, which the actor says will be crucial as the series’ final season continues. 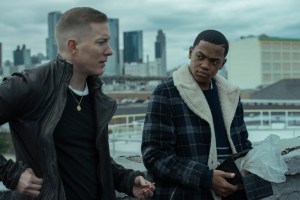 “There’s going to be a lot more strategy in his game, playing and getting to the final point,” he adds. But “Tommy is also a micromanager, and because he is now put in a position where he can’t micromanage because the plate is too large, he has to delegate.” (Those who watched the premiere know exactly how Egan “delegates” — Exhibit A: that primeras meeting — and it often involves bullets and blood.)

Tommy’s increased responsibility “puts him in a real boss position,” Sikora says. “So, who does he delegate to, and are those always the best options?”

In the background, though, lies the show’s eternal question: Will there ever come a point where Tommy would actually kill Ghost?

He speaks in character as he hastily adds, “But let me think about it.”