Amazon this Friday invited you to Carnival Row, an enclave where faeries and other fantastical “critch” live among humans, though as lesser others. Will you stick around for the already renewed drama’s eight-episode freshman run?

The highly ambitious, special effects-heavy series opened with a prologue in which we learned that the “fae” (assorted mythological creatures) were getting on just fine in their homeland until “the empires of man arrived and warred for control of its riches.” The Republic of the Burge eventually withdrew from said conflict, leaving the fae in the hands of their iron-fisted rivals, The Pact.

Cut to “now” and cue the introduction of Vignette Stonemoss (played by Cara Delevingne), a faerie who’s in the midst of trying to lead fellow refugees out of the Pact-occupied land of Anoun, and get them all to a ship on which she has secured passage to the Burge. Alas, every single one of Vignette’s charges are stopped or slaughtered by arriving Pact troops, leaving her to slip off to the ship by herself. On board, as Vignette speaks with one of the fae picked up from a previous stop, we see that she carries with her a book, inside of which is a photo of a Burgeish soldier she (ahem) knew from the war, but alas died. That night, the ship is pummeled by a winter storm that drowns all of its passengers — save for Vignette, who is later found washed up on the coastline of The Burge.

The photo Vignette had been toting, seen now floating in the sea, dissolves into a passenger aboard a Burge commuter train — detective Rycroft Philostrate (played by Orlando Bloom). As he treads through Carnival Row, a section of town to which “critch” are largely confined, “Philo” is shown to be sympathetic to the refugees. Philo is en route to interview the latest fae to have been brutally targeted by a Jack the Ripper-style killer. After sharing stories of his own time in Anoun, Philo gleans from the woman that the serial killer has a shaved head, mutton chops, a snake tattoo on his arm, and he wears a uniform. 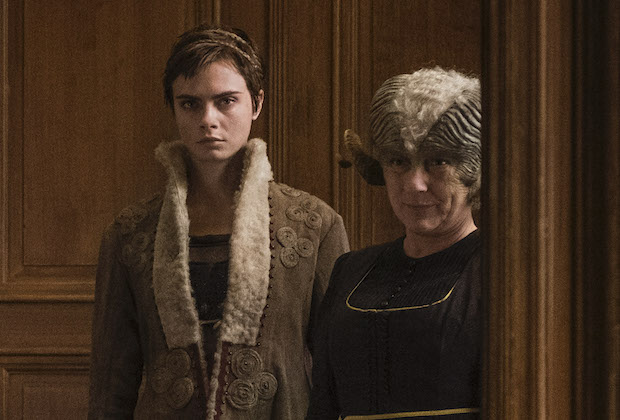 Vignette, as the lone remnant of the ship that Ezra Spurnrose owned, becomes the aristocrat’s property, and he opts to have her work off her passage as the maid to his high-maintenance sister, Imogen. With her wings cinched closed by a bustle, Vignette does her dutiful best, and yet craftily plots to get sent on an errand into town, to fetch her lady a beauty oil. Vignette wanders Carnival Row in search of the hotel/brothel where he old friend Tourmaline works. When the faeries reconnect, Tourmaline takes note of the “widow’s braid” that Vignette now wears. She then discloses that Philo, Vignette lost Burgeish love, is in fact alive in the Burge!

Philo, after finding some lawmen in attendance at an underground, anti-fae rally, comes to suspect one of them of being Jack. But later, after realizing that a Navy ship blows into town every three weeks — the same timetable as the attacks — Philo scouts out uniformed seamen at a local watering hole and finds his bald, tattooed man. A breakneck, breathless chase ensues, across a series of trellises and rooftops, but just as Philo catches up to his prey, “Jack” warns that a far, far greater darkness is lurking right under their noses… before leaping to his death.

Banged up and bloodied by the chase, Philo returns to his flat, where he rebuffs the nurturing concern of his lover/the landlord’s daughter. Later, as he retires for the night, Vignette flutters in through the window and swoops down onto him from above, pressing a blade to his throat: “You lying s–t! You’re alive!” she wails. Vignette asks why was she lied to about his death, by her friend back in Anoun. “Because I told her to,” he answers.

Though Philo says he never meant to hurt Vignette, she bellows back, “You destroyed me! You left me with nothing but grief for seven years!” And yet… she cannot bring herself to kill him. “You’re not worth it,” she sniffs, walking back to the window, before adding: “I wish you had died.”

Elsewhere in the series premiere:

* Jared Harris plays Absalom Breakspear, a politician who is at risk of his refugee-sympathetic party losing control in the local government. His and his wife Piety’s son, Jonah, is a none-too-stealthy frequenter of the brothel, where at episode’s end the lad is kidnapped by thugs, post-tryst.

* The aforementioned Imogen Spurnrose spends the episode giddily anticipating the arrival of a new neighbor, who’s moving into the poshest home in town. When she sees the stranger finally arrive, she dashes over to his doorstep, brother Ezra in tow. After being led inside by a manservant, they are introduced to Agreus Astrayon — a puck whom they mistake for a servant. But Agreus is in fact the man of this very stately house, and that fact will get Imogen’s mind racing, given that pucks are considered the lowest of the fae low.

* Following Vignette’s middle-of-the-night reunion with Philo, the premiere ends with a fae woman roaming the shoreline where the shipwreck had washed up. She finds a flute that one of the ill-fated young passengers had been playing… before getting grabbed and dragged into a sewer entrance by a huge, black, tentacled… something. Is this the “dark god” whom Jack warned Philo of earlier?

Will you return to the Row?