The 100‘s final season will be full of Hope. Shelby Flannery, the actress introduced in the CW drama’s sixth season finale as a grown-up version of Hope Diyoza, has been promoted to a series regular for its upcoming seventh and final season, TVLine has learned exclusively.

“She’s awesome,” showrunner Jason Rothenberg tells TVLine of the show’s newest addition. “I’m fairly certain we were her first professional job. She’s just out of drama school, so she’s really new, and I’m excited to see what she can do. That scene was just the tip of the iceberg. She’s going to be a big part of the story moving forward. I have a good feeling about her as an actress and a person. We’ve got her in serious fight training right now.” 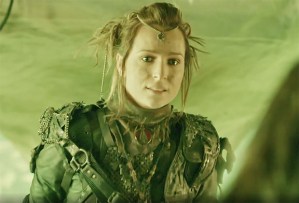 The focus of The 100‘s final season will be the mysterious Anomaly, from which Flannery’s grown-up version of Diyoza’s daughter suddenly appeared. “That reveal is obviously mind-blowing,” Rothenberg says. “The fact that Hope is now in her early twenties, when three days ago she was a fetus, does begin to imply some things about the Anomaly and about where we’re going.” (Did someone say time travel?)

The 100, which will come to end with its 100th episode, premieres sometime in 2020. Have you recovered from that game-changing finale yet? And what are your hopes for the show’s upcoming seventh and final season? Drop ’em all in a comment below.