If you’re still mourning the loss of VH1’s ’90s time-travel lark Hindsight, well, you’re not alone: One of its stars misses it, too.

Hindsight — a sort of Felicity-meets-Back to the Future rom-com that followed disenchanted Becca as she time-traveled back to her mid-’90s youth, determined to make different choices this time — debuted in 2015, and was renewed for a second season by VH1 that March. But months later, after an executive regime change, the network abruptly changed its mind and cancelled Hindsight, scrapping Season 2 entirely. Star Sarah Goldberg, who played Becca’s BFF Lolly (and who’s now a freshly minted Emmy nominee for her work on HBO’s Barry) tells TVLine that the show’s cast and crew were just as shocked as the fans were.

“That was kind of like your actor’s nightmare,” she recalls, adding that the show was “very far along” in pre-production on Season 2 when the ax fell. “For nearly a year, we had a Season 2 pickup, and I think it was about six weeks before shooting. Our sets were literally on the road from Atlanta to Los Angeles,” where Season 2 was set to film. “We were all devastated. We’d become a little family… we had such a good time regressing and going back to the ’90s.” 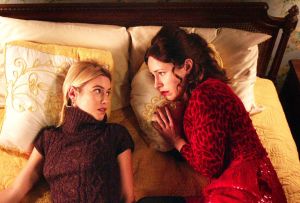 Goldberg did get an early peek at the Season 2 scripts we never got to see, though, and reveals what was on tap for Becca and Lolly: “They were going to end up back in the future, but [Becca’s brother] Jamie was really in a bad state. Lolly saw in the late ’90s when his drug addiction got out of control, and she felt there was one moment that what she did was the catalyst for his path down that road. So she was going to go back to just before that moment to try to save Jamie.” In this new alternate timeline, though, Becca and Lolly were no longer friends, “so she has to get Becca back first before she can save Jamie. Yeah, it all would’ve been really fun.”

But there was a tiny silver lining to Hindsight‘s cancellation, Goldberg remembers: VH1 had to pay the cast and crew for a full season of television, since they pulled the plug so late in the process, so “for the first time in my career, I had a savings account and could be a little bit choosy and discerning about work.” And that helped put her in a position to land the role that now has her on the shortlist for an Emmy: “In a roundabout way, it did lead to Barry, because I was able to take six months and wait for a really great script, which I hadn’t been able to do previously. And then Barry came through, and my jaw was on the floor.”

Goldberg still isn’t ready to let the dream of the ’90s die just yet, either: She says she’s still “hopeful” that Hindsight will find a second life somewhere down the road. “Listen, it’s a time-travel show, so maybe when we’re all in our 50s or 60s, we should do a whole different version where we go to some other point in all of their lives… never say never.”