Barry star Sarah Goldberg now has something on her résumé that her character Sally is still dreaming of: an Emmy nomination.

Goldberg’s work as self-involved actress Sally in Season 2 of HBO’s pitch-black comedy earned her a nod for Supporting Actress in a Comedy Series, alongside big names like SNL‘s Kate McKinnon and Oscar winner Olivia Colman. (Goldberg was actually in Greece with her boyfriend when the nominations were announced, so she was “the last to know,” she says.) Sally’s years of toiling away in Hollywood finally seemed to be paying off this season, but when Barry stumbled into a coveted audition for a big studio comedy in Episode 7, an envious Sally unloaded on him in a three-minute, stream-of-consciousness rant filled with resentment towards his instant success, anxiety about her own career trajectory and so much more — so it’s no surprise that Goldberg ended up submitting that episode for Emmy consideration.

“Sally doesn’t really have a filter,” Goldberg tells TVLine with a laugh… and that monologue didn’t really give her a chance to take a breath, either, she remembers. Star/co-creator Bill Hader “pitched the idea to me early on when we were shooting the season… ‘We’re just gonna write two pages, no punctuation. It’ll be like one long run-on sentence. Don’t even breathe. You’re just gonna keep talking.'” They went off and wrote a draft of her speech, “and Bill very generously gave me that draft and said, ‘Here’s the scaffolding. Now go away and do your Sally spin on it.’ So I got to have a lot of input and fun adding in asides and all kinds of meta jokes that we were experiencing in the shooting of Season 2.” 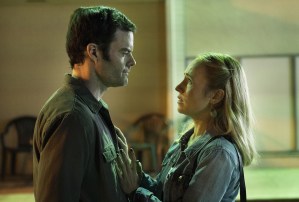 Goldberg took Sally’s speech “and rehearsed it like a piece of music,” she recalls, “because I knew it was going to have to be one long take.” She likens it to “doing a monologue in theater… I had to learn it inside out.” She was still “really nervous” on the day of shooting, though, she admits, and while she normally pitches jokes to the writers before cameras roll, this time, “they were like, ‘Surprise us!'” So she did: “I turned those two pages into three pages. Because Sally wants to say more!” The first take went so well that director/co-creator Alec Berg was ready to move on… but Goldberg wasn’t. “I never ask for a second take, but I was like, ‘Guys, I worked so hard on this. We need another go.'” They ended up doing four takes of the monologue altogether, and they ultimately used the fourth take “because that was the one where I felt loose and free and like I was really enjoying it.”

Looking back, Goldberg regards Sally’s rant as “a real gift,” and credits Hader for his generosity as a producer: “He kind of picks out what people’s strengths and quirks are, and then works with that in order to give everybody a real platform to do their best work.” Of course, a full, three-minute monologue from one character is a rarity on any TV show, and Goldberg knew that, “so I thought, ‘This will never see the light of day. It’ll be chopped to bits, because we’ve got 30 minutes to tell so much story.'” But she was “delighted” to see that the full version made it to air, without any cuts at all. She did do what she could on set to help make that happen, she adds: “I talked very, very quickly, really hoping they wouldn’t cut it. ‘I can go faster! I really can go faster!'”

Watch Sally’s speech again below, and hit the comments to share your thoughts on Barry‘s Emmy chances.