Kevin Smith is poised to introduce a new generation to the Masters of the Universe.

The writer/director/producer on Sunday announced that he is bringing the He-Man franchise to Netflix by way of the limited anime series Masters of the Universe: Revelation. The new show “will focus on the unresolved storylines of the classic ’80s era, picking up many of the characters’ journeys where they left off decades ago,” per the official logline. Smith will serve as showrunner and executive producer.

“I’m Eternia-ly grateful to Mattel TV and Netflix for entrusting me with not only the secrets of Grayskull, but also their entire Universe,” Smith said in a statement. “In Revelation, we pick up right where the classic era left off to tell an epic tale of what may be the final battle between He-Man and Skeletor! Brought to life with the most metal character designs Powerhouse Animation can contain in the frame, this is the Masters of the Universe story you always wanted to see as a kid!”

A timetable for release has not yet been revealed. In the meantime, Netflix has put out the following poster (click to enlarge): 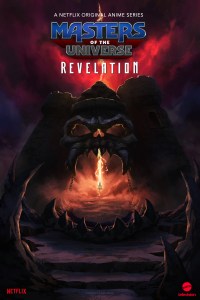 * Step Up: High Water and Wayne have both been cancelled at YouTube, Deadline reports. What’s more, the video platform has passed on drama pilot Dark Cargo (starring The Mindy Project‘s Chris Messina) and comedy It’s a Man’s World.

* The Kids Are Alright creator Tim Doyle has been tapped as showrunner on Season 2 of the Goldbergs spinoff Schooled, Variety reports. He will succeed Marc Firek, who developed the ’90s-set offshoot with Goldbergs creator Adam F. Goldberg.