Guys, I’m gonna do it: I’m going to put The Handmaid’s Tale‘s Season 3 finale in the win column for all of us.

Sure, June is bleeding out in the middle of the woods while her fellow handmaids do all they can not to drop her injured body into the fallen leaves, but we can worry about that next season.

Read on for the highlights of the Season 3 finale.

THINGS GET UNDERWAY | The episode opens with a flashback: It’s right after June was rounded up, when women are being loaded into trucks like cattle and yelled at by guardians. There’s a lot of panicked screaming, and the whole thing is really terrifying. Janine is there, mouthing off to the guardians while June fruitlessly tries to get someone to tell her where Hannah is. “Ruthless, I remember thinking,” she voiceovers, vowing that she’s going to be just as ruthless in taking Gilead’s kids away.

In present-day Gilead, June is making her way home from shopping. One by one, other ‘maids surreptitiously drop bars of soap into her bag without anyone noticing. Well, anyone except for Aunt Lydia, of course. “Your next commander will not tolerate any of your subversive nonsense,” the older woman warns her, but June can’t be bothered to care. “I will keep the subversive nonsense to a minimum,” she says, all but rolling her eyes. And when Lydia tells her to watch herself, June says, “You got it!” (Heh.)

At home, Beth keeps throwing up because she’s so afraid of the plan going sideways. But she rallies and helps Sienna and June, the latter of whom is melting down all of that soap so she can make windows opaque and grease squeaky gates. She’s in the backyard when she notices that a martha and a roughly 10-year-old girl in pink are hiding in the bushes, even though no one was supposed to show up until sundown. “Is this Mayday?” the martha asks. “Yes,” June says. IT HAS BEGUN.

‘YOU REALLY THINK THIS IS STILL YOUR HOUSE?’ | The girl, Kiki, and her martha are from Lexington, and they walked all the way to the Lawrence house, so the girl has a blister. June bandages her foot and answers her questions about what it’ll be like when they land in Canada. “You’ll be free. You can wear whatever you want. No one is going to hurt you for reading, or tell you what to think, or who to love, or what to believe in. And you know, you don’t have to be a wife. Or a mother, if you don’t want to,” June says. “Then what would I be?” the girl asks. “You,” June answers, reassuring the girl that yes, God will still love her then.

Kiki’s martha then freaks and says they need to leave, that they’re just going to go back to the house and Kiki’s mom will understand, even though the martha drugged her and kidnapped her kid. June grabs her gun and points it right at the martha, then gets Kiki away from her and promises she’ll shoot her if she runs. But when the marta goes, June can’t bring herself to do it. She does, however, in a wind up pointing the weapon at Kiki, which brings June to her knees in horror when she realizes what she’s done. 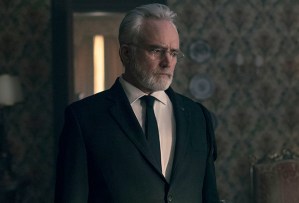 And then Commander Lawrence returns home from his meeting, which he’d arranged in order to draw security’s attention away from the house, announcing that Kiki and her martha had been spotted. There’ll be house searches and roadblocks, he says, so he’s “pulling the plug” on their operation. June says nope, that they’ll find another way to get to the plane, because “I am not sending her back so she can get raped and maimed in this insane f–king world that you helped build.” He reaches for the gun, stating that he’s made his decision, and that seems to crystallize something inside June. She regards him, refusing to surrender the pistol, and stands. “It’s not your decision,” she says. “Men. F–king pathological. You are not in charge. I am. So, go to your office and find me a f–king map. Thank you.” Lawrence looks ridiculous as he tries to pull the “this is my house, young lady” thing, and June nearly giggles as she smiles patronizingly at him, asking, “You really think this is still your house?” Not gonna lie, I really loved this scene.

IT’S GO TIME! | Pretty soon, more kids and marthas show up. Rita is among them; she’s with a martha holding an infant. “She killed them,” she tells June, who’s momentarily taken aback. “They wouldn’t just let her leave.” Woah. June hugs Rita and then, thanks to a smart idea from Siena, it’s time to go: June and some others mark a path through the woods, tying strips of cloth to trees.

When they return, they’re alarmed because the house is quiet and the light they left in an upstairs window as a signal is turned off. But when they go inside, they find Lawrence reading Treasure Island by candlelight to a room full of rapt kiddies and marthas. Beth notes that there are more than 52 people down there, but June just smiles.

Then Janine arrives with the news that Kiki’s martha has been arrested — turns out, she didn’t give her mistress enough drugs to kill her — and Kiki has been reported missing. That means it’s go time! “You said you weren’t going to be any trouble,” Lawrence says to her. “Yeah, I lied,” she replies. “Women,” he sniffs. He’s staying behind (“Eleanor would’ve wanted me to stay and clean up my own mess”) so June blesses him, and he her, and she’s gone. (Side note: How are all of these kids a) so quiet and b) totally OK with this? There are some who are young enough not to have remembered their real parents, which means they’re being ripped away from the only parents they’ve ever known. Wouldn’t that make for a few tears or tantrums?)

It’s also at this point that I wonder what June’s personal post-liberation plan is. Like, if this all goes well, how is she going to stay in Gilead and survive? 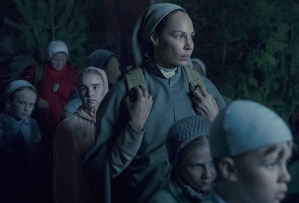 AW, SHOOT! | Anyway, June and the Von Trapp Family Singers snake their way through the forest, ducking when cars with searchlights venture near their position. They make it to the airport but — crap — there’s a guardian in a vehicle standing between them and the tarmac. June instructs Beth to take everyone farther down the road and get them into the airport some other way, and she’ll distract the guardian while that happens. Which essentially means she’s going to die.

June makes Rita promise to get Kiki and the infant on the plane. “May He in His mercy protect you,” the martha says through tears. And June, herself, is crying when she walks, alone, back to near where the guardian is. But suddenly, all of the handmaids are with her. And so they pick up rocks and hurl them at the man, who doesn’t know what is happening. He starts shooting his machine gun in their general direction; while the gunfire is happening and his attention is elsewhere, Rita and the other marthas usher the kids across the road and toward the plane.

Eventually, June decides to help the other handmaids get to safety by stepping out of the woods and into the light, which causes the guardian to charge toward her. But she ducks back into the trees and leads him on a chase away from everyone else. He shoots at her again and eventually hits her; she goes down. But when he gets closer and turns her over, she’s got her gun ready and shoots him. With the weapon leveled at him, she orders him to use his radio to tell his comrades everything is fine. So he does, and she thanks him, then she kills him.

June lays back and we see that she’s perhaps more badly hit than we realized. And as she clutches the wound in her side, the plane takes off and flies directly over where she’s lying. She cries in happiness and relief.

WELCOME TO CANADA! | Moira, Luke and Emily are there, volunteering with refugee efforts, when the plane arrives in Canada. Moira is taken aback when she boards the plane and sees so many scared little faces staring back at her. “Miss, is this the place where I can wear what I want?” Kiki asks her. Barely holding it together, Moira says yes and begins ushering them into the hangar.

Another volunteer notices Kiki and says, “Rebecca?” It’s Kiki/Rebecca’s father, and their tearful reunion makes a real impression on Luke, who can’t stop scanning the crowd of kids for Hannah’s face. (Obviously, she’s not there.) Meanwhile, Emily sees Rita and hugs her as they both cry. Emily introduces the martha to Luke. “She did this. June. Your June,” she says, hugging him. “She did this. She did everything.”

‘MAIDS ON THE MARCH | Back at the airport, the sun is up. June is still on the ground, bleeding. A bunch of handmaids that includes Janine and Alma return and carry June off, using her cloak as an improvised stretcher. In voiceover, June recites a Bible verse about being delivered into the land of milk and honey. On the stretcher, she smiles and closes her eyes.

Now it’s your turn. What did you think of the finale? Grade the episode and the season on the whole via the polls below, then hit the comments with your thoughts!