Mike Ross returns to Suits this Wednesday (USA Network, 9/8c), and Harvey might have reason to be worried about his former protégé’s homecoming.

Since leaving New York City and the firm behind, Mike has grown up and is now “even less of a puppy than he once was,” his portrayer Patrick J. Adams tells TVLine in the following Q&A. With his eyes on beating Harvey in the courtroom, Mike comes back “fully loaded,” and with a more confident attitude, to take on his mentor.

Below, Adams previews the bromance’s changing dynamic, Mike and Rachel’s relationship status, and his character’s reaction to “Darvey” finally getting together.

TVLINE | What was it like returning to the show after some time away?
Honestly, I was excited to do it, and then as I got on the plane, I got a little nervous. Obviously, I spent years and years up here shooting the show, but it had been a while since I’d been there, and I thought, “I haven’t done this in a while.” What if you kind of forget? Like getting on a bicycle, you’re not sure if it’s going to work again. And as I pulled up to set and got out of the van and sort of saw all the familiar faces, it was so strange, because what was a year and a half away really felt like a couple of days. It felt exactly like coming home, seeing all your family again, and we just picked up right where we left off. So it was such a gift, after all this time, to still feel like I totally had a place and knew how everything works and could hop right back into work like I hadn’t gone anywhere. 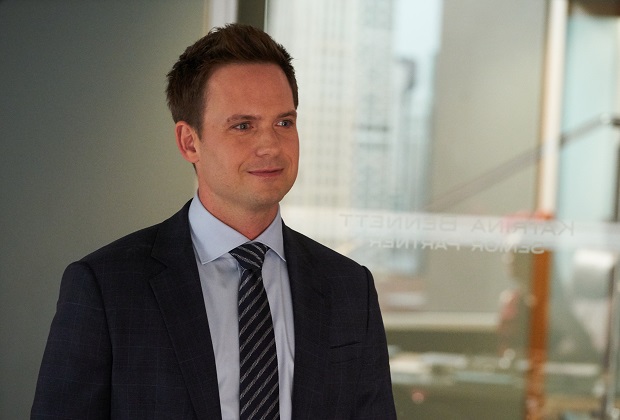 TVLINE | Since we last saw Mike, he’s been on his own, out of Harvey’s shadow. How has that changed him?
I thought about that a little bit. Like anybody who goes out on their own [and] had a mentorship… my experience with that is that you just grow more into yourself and into your own skin and you’re more confident. I think Mike is coming back to the firm even less of a puppy than he once was. He always had this streak where he would never quite see all the steps ahead of him, and Harvey would, and I think Mike now does. He’s been doing this long enough, and he’s found his own rhythm, and while it might not be exactly like Harvey’s, he’s just as prepared and just as ready to take him on. The whole series has been about Mike trying to get to a place where he feels likes he could take Harvey on and beat him at his own game. Right now, in this episode, you’re finally seeing that he has taken that last step, moved away from Harvey, and he’s come back fully loaded and ready to take him on.

TVLINE | Does the fact that Mike is now on equal level with Harvey, professionally, change their personal dynamic?
I think for Harvey, he’d probably argue that Mike isn’t on the same level as Harvey on a professional level, but I think that would be a fun fight for them to have. [Laughs] They’ve taken the logical next step, which is that they do, to some degree, see each other as equals. I think Harvey is always going to think he’s better than everybody else by just a little bit, but I think he has a lot of respect for Mike, and I think [Mike] being away has made [Harvey] realize how much respect he has for [Mike]. I guess that colors the way that they interact and gives Harvey the chance to sit back and watch his wunderkind do his thing. He’s probably happy for Mike, who’s finally grown into his own.

TVLINE | We learned in an earlier episode that Harvey never sold the apartment that Mike and Rachel lived in. Did that surprise you when you found that out?
[Laughs] It did surprise me. It made me wonder what he’d been doing with the place, because there’s also furniture left in there. He should have been Airbnb-ing or something, making a little money. It’s not a very smart business move.

TVLINE | Before Mike left, he was kind of pushing Donna to explore her feelings for Harvey. Now that the two of them are together, does Mike take any pride in that or credit?
I think he takes a little credit. I think he’s just happy for his friends. He was smart enough to always see that was the direction it was going in and that they made a good team. I think Mike is very happy that they finally found a way to be [with] each other, and that Harvey could relax and realize how great what he has right in front of him is.

TVLINE | And how is Mike’s relationship? How’s Rachel doing off-screen?
[Laughs] I’ve just sort of had to make that up on my own, but I think they’re doing great, killing it in Seattle. I didn’t really talk to [showrunner] Aaron [Korsh] much beyond: It’s going very well, and they’re very in love, and they’re happy they moved out of New York and are working at this new firm.

TVLINE | Mike has come back to pick a fight with Harvey, but in the midst of that, he’s also picking a fight with Samantha, unbeknownst to him. What is his interaction like with her?
I think, at first, Mike underestimates her and just thinks she’s going to be sort of a distraction here, and, ultimately, she should step out of the way and let him and Harvey go at it. But he quickly learns that he shouldn’t underestimate her. She ends up playing a very important role in how it all plays out. Mike makes the mistake of underestimating what a great lawyer she is and what lengths she’s willing to go to to win a case. Lo and behold, Mike gets sort of, with all of his preparation, caught a little off-guard and has to improvise. 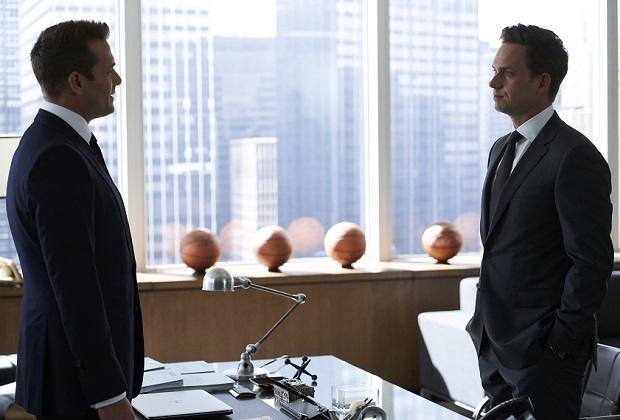 TVLINE | The firm itself has gone through a shift since Mike’s been there. What does he make of the situation that they’re in now with Faye and the ethics of it all?
That’s a good question, because it’s interesting, to me, that in the episode, Mike doesn’t really comment too much on it. I think that makes sense. I think, for Mike, that kind of drama is partially why he left. And so there’s a reason why he’s dealing really specifically with a case. And even though there are no scenes where he addresses what’s going on with Faye and what’s happening at the firm… if there were a scene, he’d be like, “This is exactly why I left this place. This is why I don’t want to be involved. You guys get so distracted chasing your own tails. Meanwhile, I just want to be working on cases I believe in.” That’s where I think he would stand on all of it. I also don’t know how informed he is about every detail that’s going on and all the machinations of who’s manipulating who and who’s done what. He’s really there for a singular purpose: to win this case for his client. He doesn’t want to get too distracted by any other stuff.