This post contains spoilers for the finale of GLOW Season 3.

What do you get the gorgeous lady of wrestling who’s got it all? That’s the question at hand in GLOW‘s Season 3 finale, which chronicles the women’s final show before they all leave Vegas for Christmas break. Read on for a recap of “A Very GLOW Christmas.”

DECK THE (CASINO) HALLS | No one is more into the festivities than Carmen, who organizes a Secret Santa for her co-workers. “I just really, really love Christmas,” she chrips in the  dressing room, uncaring that none of her friends seem very excited by the holiday. To be fair, many of them still are processing their experience of the hate crime at the Libertine Ball — though, as Yolanda sharply points out, it was a whole lot scarier for those who identify as members of the targeted community.

To boost spirits, Carmen approaches Ruth about doing Charles Dickens’ A Christmas Carol as the last show of the year. But Ruth, still smarting from losing the part in Justine’s movie and what happened with Sam afterward, isn’t into the idea. Carmen is undeterred. “You picked me for your secret Santa, right?” she says. “Well, this is what I want for Christmas.”

LESS THAN GLEE-SOME THREESOME | Bash and Rhonda aren’t doing well in the aftermath of their evening with Paul. Bash sees him at the lobby bar and demands that Sandy fire “Joe” from the maintenance staff; she’s the one who calmly informs him that Paul is actually a gigolo. Meanwhile, Debbie and J.J.’s seemingly perfect relationship sours when she dares to offer him some advice on a business situation. Her insight is keen — she thinks he’s undervaluing the TV station he wants to buy, which is why the current owner is dragging his heels on the sale —  but his irritation regarding her input is a red flag. “You’re my girlfriend, not my partner,” he says firmly.

The night of GLOW’s last show, Bash is supposed to play Liberty Belle’s son. But he’s nowhere to be seen backstage, so she goes up to the penthouse — in her White Christmas-inspired costume, which is amazing — and finds him so very drunk, and therefore confessional. He starts talking about the threesome, saying that the worst part was that he really liked being with Paul. “I liked it so much. And she watched me like it. I’ll do it again. I know I’ll do it again if we stay here,” he laments. He’s incredibly upset, and Debbie instantly switches from ticked off to sympathetic. “Look at Liberace. He’s probably slept with more valets than I have, and he seems to be doing OK,” she says in an attempt at comfort. But Bash says he just wants to die, then falls into her lap, sobbing and asking her to tell him what to do. Suddenly, Debbie has a flash of inspiration and announces that Bash should make an offer on the network that J.J. is trying to buy. (Side note: Chris Lowell is really great in this scene. Like, really great.) 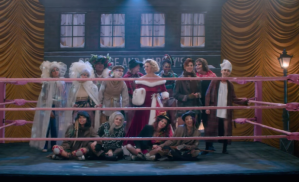 MAY YOUR DAYS BE MERRY AND BRIGHT | The women perform their Christmas Carol-themed match, with Zoya in the Ebenezer Scrooge role. It’s a hit with the crowd. The night ends with everyone in the ring, singing “White Christmas,” then Keith busts into the room dressed as Santa. “I was your Secret Santa. I figured this is what you wanted,” Carmen says to a shocked Cherry. Cherry runs to her husband and kisses him, crying.

During their conversation afterward, it’s clear that Mr. and Mrs. Bang still love each other very much, but their difference of opinion about having kids hasn’t gone away. Keith says that he’s talked with a woman about adoption — which would allow Cherry to keep working (he’d be a stay-at-home dad) and wouldn’t involve her having to bounce back from a pregnancy physically — but the look on her face when he mentions it is ambiguous.

The women trade their Secret Santa gifts, a time Arthie uses as a platform to announce something she’s been wrestling (pardon the pun) with all season. “I’m gay,” she tells her friends… who are like, duh. But the fact that she is owning the label is huge, and Yolanda seems to appreciate the gesture. How fitting, then, that her gift is a rainbow headband from Stacey?

ALL’S WELL THAT ENDS WELL? | While his lawyers work to finalize the deal, Bash tries to stop Rhonda when she wants to talk about their menage a trois. But she’s adamant that they discuss it. She apologizes for setting up the ruse with Paul, saying, “I don’t want to be the kind of person who needs to trick people, ever.” He answers that he wants her — and only her — and that he wants them to move back to Los Angeles. They kiss, then he drops a bomb: “I want us to start a family.” Rhonda, understandable, looks puzzled. Downstairs, Sandy sadly informs Bob that the Rhapsody show will close in two weeks, because Bash has pulled out his money.

In California, Justine and Sam have breakfast at a diner and exchange Christmas gifts. She gives him a shirt he can wear while directing her movie. And he gives her a manilla envelope with some papers in it. “You want to adopt me?” she says after opening it. He explains that he wants her to have a legal claim to “all the good s–t when I die, which might be sooner than we think.” (Side note: Remember how Sam had a heart attack and now I’m 50 percent more scared for him in any given scene? Good times.) She’s touched. She immediately signs them, which makes Sam very happy.

RETURNED GIFTS | The women all head to the airport to go home. That’s where Carmen tells Ruth and Debbie that she’s not coming back in the new year: She misses wrestling, so she’s going to join Kurt and do it with him. “I didn’t tell the girls because I didn’t want to ruin Christmas,” she says sadly, and she can’t be talked out of her decision. Then Ruth realizes that her plane is boarding, so she runs to the gate, but Debbie chases after her because she just can’t keep the news inside for a minute more. “Bash is buying a TV network and I’m going to be the president!” she blurts out. “And we’re going to program a new wrestling show with new characters, because we have no legal rights to the old ones, and I want you to direct it.” Ruth is surprised. “I’m going to build us an Eden, where we run the show, you and me,” Debbie says, waiting for her friend to get excited.

It doesn’t happen. Ruth points out that she still wants to be an actress. “If being an actor was going to happen for you, it would’ve happened by now. How many times are you going to break your own heart?” Debbie reasons, adding that she’s building both of them an off-ramp from the insane highway of showbiz. She means well, but ouch. “I don’t want an off-ramp. I never even got on the road,” Ruth says. “I don’t want what you want.”

Debbie’s frustration reaches its peak as Ruth starts to walk down the jetway. “I don’t understand you,” Debbie says. “Yes, you do. Probably better than anyone,” Ruth replies. Then she gets on the plane, Debbie sputters at the gate, and we end this season with GLOW‘s central pair once more at odds.

Now it’s your turn. What did you think of the finale? Grade the episode and the season overall via the polls below, then hit the comments with your thoughts!