Already with the arrival of Fox’s BH90210, the questions of Shannen Doherty being a real-life holdout and the “recasting” of the cast members’ spouses have been answered here on TVLine.

But coming out of this week’s not-a-reboot premiere, we were left with other mysteries to solve. And maybe you had some of these questions, too. Such as:

DID THE BEVERLY HILLS, 90210 CAST REALLY GET STIFFED ON ANY PROCEEDS FROM MERCHANDISE? | After all, Tori Spelling’s theft of one of Donna Martin’s dresses in the premiere was triggered by her grumbling that they never saw one shiny cent from T-shirts bearing their likenesses. “There are certain parts of it that are true, and certain parts of it that are embellished,” Jennie Garth, who co-created BH90210 with Spelling, told TVLine. “But there might be some truth to that, to a certain level, yes.” 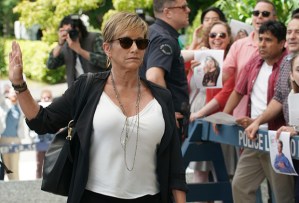 WHOSE IDEA WAS IT TO HAVE GABRIELLE CARTERIS’ BH90210 PERSONA BECOME BI-CURIOUS? | In real life, Carteris has been married to stockbroker Charles Isaacs for 27 years, while as SAG-AFTRA president she fought discrimination against LGBTQ actors. (She has said that she in fact was on the receiving end of such discrimination, when a short haircut led people to assume she was a lesbian.) On BH90210, the fictionalized version of Andrea’s portrayer — coming off that kiss from a female fan — will explore her sexuality by way of the reboot that the reunited cast starts planning in Episode 2. “We thought long and hard about that [in the writers room], and then we talked to Gabi about that, and she loved it,” Garth reports. “So we went full steam ahead with that.”

HOW DID GARTH AND JASON PRIESTLEY FEEL ABOUT THEIR BH90210 CHARACTERS FALLING INTO BED WITH EACH OTHER? | Seeing as in real life, Garth is back with third husband David Abrams and Priestley has been wed to make-up artist Naomi Lowde for 14 years? “At my age, to do a love scene like that, it’s a thing,” Garth said with a smile. “It’s a celebration.”

HOW DOES A RECURRING BEVERLY HILLS, 90210 GUEST STAR BECOME SHOWRUNNER OF THE (FICTIONAL) REBOOT? | As revealed in promos for Episode 2, Christine Elise, who played Emily Valentine, will be put in charge of the reboot the reunited cast starts planning. In real life, Elise wrote a handful of Beverly Hills, 90210 episodes, and since then has worked as a story producer on several series. “It’s a crazy world!” in which Emily Valentine becomes her co-stars’ boss, Garth acknowledges with a laugh. “We wanted to create a world that was partly fictional, partly soapy, dramedy, comedy, all mixed together. So, some of the things might not make sense at first sight, but keep watching and it will all sort of evolve.” 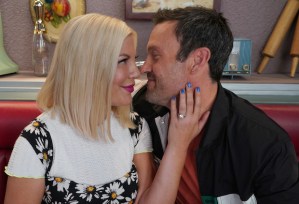 LAST BUT NOT LEAST: WILL BH90210 EVOLVE INTO AN ACTUAL REVIVAL THAT CATCHES UP WITH BRANDON, KELLY AND THE GANG? | Ian Ziering notes that with the “nightmare” sequence that opened the premiere and similar fake-outs in coming episodes, “You’ve seen glimmers” of what an actual revival would look like. And in success, “If there is more for us to produce, you might see an authentic episode at some point,” he adds. “I would think we would all come together and say, ‘Let’s make it happen. Let’s step back into the original characters for an entire hour.’ But right now, it’s all about the journey of us coming together and getting the show back on the air.”

The fictional show, that is. (With reporting by Vlada Gelman)