Once BH90210 viewers realized that Tori Spelling, Ian Ziering, Jennie Garth et al were playing not their characters, but (versions of) themselves, there was another twist on tap: the actors’ on-screen families were fictitious.

For example, Spelling in real life is wed to Dean McDermott, with whom she has done reality-TV shows and with whom she does have many (five) kids. On BH90210, however, Tori’s husband is named “Nate” (played by Mother May I Sleep With Danger‘s Ivan Sergei), and they have a full half-dozen rugrats.

Similarly, Brian Austin Green on BH90210 is married to a pop star (played by Power‘s La La Anthony), while in reality the actor calls movie star Megan Fox his wife. And Ian Ziering’s real-life partner, Erin, is a lifestyle blogger, while on-camera, wife Stacey (Neighbours‘ Jenna Rosenow) is a fitness influence/wannabe Real Housewife. And whereas Jason Priestley’s BH90210 persona has no kids with “wife” Camille (played by Vanessa Lachey), in real life he and Naomi, his wife of 14 years, are parents to two. 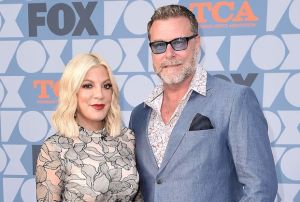 “All the spouses and children [on BH90210] are completely fictionalized,” Spelling explained during the summer series’ TCA press tour Q&A. “Whereas all of us, [playing] a version of ourselves, we chose specifically to make that different as best we could.”

Garth, both on- and off-screen, has been through, yes, three marriage break-ups, though in real life she and Husband No. 3 have in recent years patched things up. “For those of us who do have spouses, we chose to use completely fictional characters for those roles, to protect our families,” Garth explains.

The spouses who have been swapped out for stand-ins “were very supportive,” Garth told TVLine at a Wednesday-night TCA soiree. “I can say for Tori and myself, our husbands have been so supportive through this whole two-year journey, and our families have sacrificed so much time with us. Everybody is very happy with the finished product.” 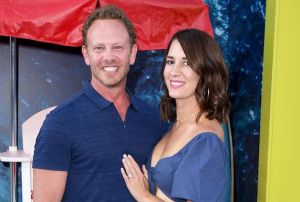 In the case of Shannen Doherty, the BH90210 version of her is single and theoretically ready to mingle, though the actress in real life has been wed to photographer Kurt Iswarienko for eight years.

“My husband … he’s private, and he’s got his own career, and he was pretty adamant about that not being a part of [the show], which I can completely respect,” Doherty explained. So on-camera, “I have no spouse as of right now.”

Storytelling-wise, using fictional husbands, wives, exes and lovers allows BH90210 to freely spice things up and get the on-screen gossip mill churning, rather than stick to facts.

“That was kind of the whole point,” says Garth, “to take people’s perceptions and twist it … and take the power back, so that we’re the ones in on the joke.” (With reporting by Vlada Gelman)

Want scoop on BH90210, or for any other show? Email InsideLine@tvline.com and your question may be answered via Matt’s Inside Line.