Who needs Vegas showgirls when you’ve got Liberty Belle and Zoya the Destroyer?

Things are going just Fan-Tan-tastic for the gorgeous ladies of GLOW at the start of Season 3, which began streaming on Netflix today. As you may recall from the end of Season 2, Sam, Bash, Debbie, Ruth and the rest now are in residence at the Fan-Tan Hotel and Casino in Las Vegas — aka the wrestling show’s new home. And the troupe excitedly prepares for opening night… until a national tragedy makes all the sequins and signature moves seem silly and small, in comparison.

Will the GLOW show go on? Read on for the highlights of Episode 1, “Up, Up, Up.” 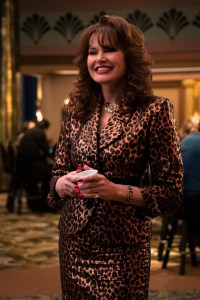 AN HONEST MISTAKE | On the morning of opening night, Ruth and Debbie appear, in character, on a local news broadcast while the rest of their colleagues watch from their hotel rooms. Debbie and Ruth are vamping it up, and when the interviewer notes that they’re going to watch the Challenger launch live (side note: Oh God), Ruth-as-Zoya sees a perfect opportunity to play up the Russian character’s hatred of the United States. “I spit on this Challenger mission!” she sneers… about 20 seconds before the shuttle breaks apart, killing all seven of its crew including school teacher Christa McAuliffe. Debbie realizes what’s happened before Ruth does, and with tears in her eyes signals to the cameraman: “We need to cut.”

After, Ruth is heartsick about what happened. “I made fun of a national tragedy on live TV,” she says while Sheila and Carmen try to comfort her. To add to the misery, Russell phones to say that he’s been recruited for some work that evening and won’t be able to make it to the show’s big opening. Downstairs, outside the venue, Debbie is lobbying Sam and Bash to push the premiere back out of respect for what’s happened. But Bash doesn’t want to do that — and when the Fan-Tan owner Sandy (hi, Geena Davis!) supports his decision to let the show go on, Debbie eventually caves and goes along with the original plan.

ZIPLINE, ZAP, ZILCH | During the tech rehearsal, we see that the show is a little more theatrical now — more light cues, shinier props, etc. —but that doesn’t mean the run-through is going according to Sam’s plan. (Side note: I laughed out loud several times at Marc Maron’s exasperated line readings about the various light snafus and audio problem. Delicious.)

In the wings, Ruth can’t shake what’s happened and lobbies the producers to address the Challenger explosion head-on during the show. She gets no support. Bash is worried that his opening-night party — which, unfortunately, is space-themed (!) — is going to be a flop. The rest of the women can barely tear themselves away from CNN’s coverage of the disaster. And when a fire alarm goes off in the middle of rehearsal, leaving Ruth dangling from a stuck zipline halfway to the ring, everything seems pretty bleak. 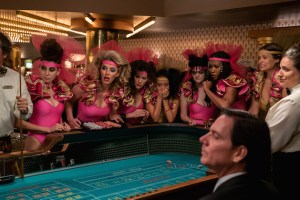 DEBBIE IN CHARGE | Eventually everyone, including Ruth, files outside in costume to wait for the all-clear. Once they’re back inside, Debbie gets Sandy to give them a tray of chips with which to gamble, which effectively ends the tech rehearsal. But Ruth can’t seem to pick herself up, even when the ladies start winning at the craps table, so Debbie drags her outside to see the marquee. “We may never open a show in Las Vegas ever again,” she says as they stare up at the neon. She points out that they need to enjoy what’s happening as it’s happening, then urges Ruth to shake off her sadness. “Everyone is up. Don’t bring them down into your sinkhole of despair,” she warns, but amicably so. And when the valet mentions that he enjoyed the previous evening, that’s when we learn that Debbie has been doing Las Vegas. “He’s 25. I’m single,” she says with a shrug. “Smoke ’em if you’ve got ’em.”

Upstairs, Bash’s ongoing freakout about the party is quelled by Rhonda, who — it turns out — is quite handy at solving entertaining problems and calming her new husband’s nerves. She also tells him she loves him. His response to that, as well as to when she starts undressing him and assures him that “I want to,” makes it seem like it’s the first time for both romantic milestones for these two.

BRAVO! | Just before showtime, Debbie gives everyone a pep talk in the dressing room and acquiesces to Ruth’s request for a moment of silence. But when Rhonda comes in with a bunch of balloons, the whole thing turns into a giggling balloon fight that even Ruth gets caught up in. When the show gets underway, judging by the laughter, it seems like a success.

Afterward, Ruth changes into a gold lamé cocktail dress. She runs into Sam, who’s changed into a tuxedo, and they have a drink in his room before heading up to the party. He tells her about how Robert Kennedy was shot while he was filming his first movie, and they talk about how they made it through the day. There’s a moment where something might happen — it’s more fraught than awkward — but then she breaks the mood and suggests going upstairs to join everyone.

They meet Debbie, resplendent in midnight blue velvet, at the elevator, and she gives a raised eyebrow to the fact that they came out of the same hotel room. Then the other ladies start piling into the car. When Rhonda comes down just so she can ride up with her wrestling sisters, Sam has had enough: He exits the car, leaving the wrestlers to their lady talk.