Included in the 10 — count ’em, 10! — new photos from The Walking Dead Season 10 that AMC dropped on Thursday is one that shows, among others, Daryl, Carol and Michonne taking aim during a battle that looks like it could set the whole forest ablaze. Yet those probably aren’t the flames that really are really going to get fans of the AMC drama talking. 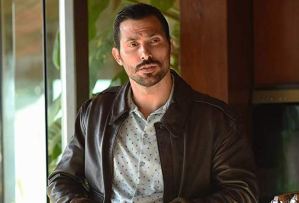 The network also announced that it had cast Juan Javier Cardenas (pictured on FX’s Snowfall) as Dante, a new character who’s described as “rogue and fast-talking” as well as pivotal to the goings-on in Alexandria. Readers of the comic-book series on which the show is based will know that in Robert Kirkman’s source material, there’s also a character named Dante, a Hilltop denizen who reopens Maggie’s heart following Glenn’s untimely demise.

Mind you, there’s been no official word yet as to whether or not Lauren Cohan will be reprising the role she left during Season 9 to star on ABC’s ill-fated Whiskey Cavalier. However, as has been previously reported, The Walking Dead is “working on” rehiring the leading lady, whose beloved character was sent off with son Hershel to help build new communities with forward-thinking Georgie.

To take a look at the images, click on the gallery to the right (or go here for direct access). Then hit the comments. Do you think this Dante will be the same Dante from the comics?