We’ll miss you, sweet Eleanor. You were too good for The Handmaid’s Tale‘s Gilead, too savvy to live in permanent oblivion and too much of a threat for June to seriously consider saving you when she saw you gasping for air like a goldfish that leapt outta the bowl.

One other quick note about this week’s episode? I KNEW IT. Serena, you sly little minx, I KNEW you were somehow in on helping Mark Tuello nail Fred to the war-crimes wall. Honestly, I would’ve been very disappointed if you hadn’t been the underhanded traitor that we’ve despised all along.

Read on for the highlights of “Sacrifice.”

‘YOU JUST GOT AWAY WITH MURDER’ | We pick up with June still in her bedroom, fondling the gun Lawrence handed her at the end of the previous episode. She’s sure that the tires in the driveway and the boots on the stairs are Guardians coming to get her for killing Commander Winslow, so she points the weapon at the door and waits. But it’s just Eleanor, who tells her there are men downstairs with Joseph, and Beth needs help preparing food for them.

June descends to find Commanders Putnam (one hand) and Calhoun (the father of Natalie’s son) talking with Joseph. Before she can go in to deliver the food, Beth praises June for being such a badass — it’s funny that at first June thinks she’s being sarcastic — and reports some good news: Billy at Jezebels is in, and “Flight’s a week from today.” Woo!

The atmosphere is less jubilant in the parlor, where the commanders want Lawrence to help them solve the problem of what Canada has done to the Waterfords. “Now that those two are out of the picture, you come to me?” he asks, pointing out that his security clearance has been stripped. They hint that they might be able to change that, but he kicks them out, saying he needs time to mull the situation. Once the men are gone, Lawrence debriefs with June.

Gilead’s higher-ups think Winslow is just missing and that maybe he got taken by American forces the way Fred and Serena did — and that’s how June learns what’s happened to the man who used to rape her and the woman who held her down when he did. He adds that they’re facing trial as war criminals. “I guess they didn’t bring 52 kids with them,” he quips. And when June takes a minute to process what she’s heard, he adds, “Cheer up. Fred and Serena are toast, and you just got away with murder. All in all, not a bad morning.” She sits, covers her face with her hands, and starts to laugh. 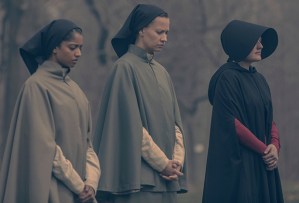 RITA ROCKS | So, back to June’s plan, which she spreads in whispers at Loaves and Fishes: The marthas will get the kids to the house after dark, then Lawrence will get them to the plane. Rita is shopping there, too, and she makes sure June knows that Serena was kind to her when she left. “She’s only nice when she’s up to something,” June grumbles. It’s true! Anyway, Rita says she’ll do whatever’s needed to bring the plane plan to fruition, and she’s impressed with June’s moxie. “This is your idea?” she asks. “Such a boss now.” They briefly hold hands in the potato bin, and Rita tells June, “I’m proud of you.” She’s definitely gonna die soon, isn’t she?

OH, ELEANOR | June’s boss buzz is killed, however, when she gets home and sees Mrs. Winslow and Mrs. Putnam praying with the Lawrences. Eleanor is super agitated; when Olivia laments that she can’t raise six children by herself, Mrs. Lawrence pipes up to say, “We can take the children with us!” Joseph plays it off like she’s offering to put the Winslow kids up at their house, but Naomi knows something weird is going on. (Side note: How is that woman ALWAYS around when Eleanor says something incriminating?)

But there are bigger problems: Gilead wants to close the border, so he orders June to move up the departure date. Um, not doable, dude. They’re interrupted by Eleanor, who is planning to go door-to-door to grab kids for the transport. June has to get physical with her mistress in order to get her to stop, and though Joseph balks at his handmaid’s violence, Eleanor ultimately agrees it’s what was necessary to subdue her.

Much later, June brings Eleanor some food and finds her unresponsive after taking an overdose of sleeping pills. June briefly tries to revive her, but then thinks better of it, kisses her on the forehead and then leaves the room as though she’d never been there. One of the marthas finds Eleanor’s body later.

Joseph is a broken man in the aftermath of his wife’s death, but at least he got Gilead to keep the borders open. “It’s hard to argue with a man who’s in mourning, even for them,” he notes wryly, trying to keep it together. They have a teary exchange about how kind Eleanor was, then they attend her funeral. After everyone else leaves, June stands with her commander at the grave. 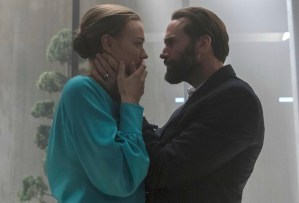 YOU KNEW IT WAS A SNAKE WHEN YOU PICKED IT UP | Up north, Serena is allowed to visit with Fred in his cell for five minutes. He ardently embraces and kisses her, asks if their captors have hurt her. She says she’s fine, then begs him not to say anything they’ll be able to use against him in the trial. He brushes that off, certain that Gilead will extract them from their current situation. “You have to stop worrying about me now. You have to save yourself. I’ll be fine,” she says, crying a little. Fred’s entire demeanor changes on a dime. “What have you done?” he whispers. “I want to be with my daughter,” she answers, and if he didn’t think she’d do anything to make that happen, he really never knew her at all.

Fred is so angry, he’s got her by the neck. “I pity the child that has you as her mother,” he growls. But Serena’s all thank u, next. “I’ll pray for you, Fred,” she says on her way out of his cell. 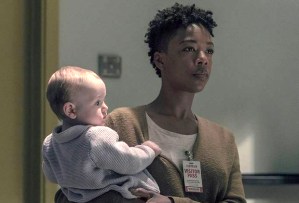 Moira and Luke bring Nichole to the detention center for a supervised visit with Serena, but they’re not happy about it. If you’re looking for a good example of a mic drop, may I direct your attention to what Moira says to Mrs. Waterford as she hands off the kid? “Just because you got some new clothes doesn’t make you any different. You are still the same woman who held my friend down so your husband could rape her. And he raped me, too, at the whorehouse. Treated me like shit like I was worthless. I am who I am and I have sinned plenty, but you? You are the gender traitor.” BOOM.

Meanwhile, Luke wants to meet with Fred. That… doesn’t go well, either. Suffice to say, it ends with Fred screwing with Luke’s mind (“The June Osborne you knew doesn’t exist anymore. Gilead’s changed her. I’ve changed her.”) and Luke punching Ol’ Beardy right in his stupid face before Tuello pulls him off and hauls him out.