So You Think You Can Dance‘s quartet of judges had an unenviable task on Monday night: Take a group of astoundingly talented male dancers, and cut it down from 10 to five.

Last week, Nigel Lythgoe & Co. made similarly tough decisions with the ladies, selecting only five of them to advance to the Top 10 and the live shows. This week, it was time for the gentlemen to make their cases — but some of them just weren’t persuasive enough.

Before we get to the results, let’s break down each of Monday’s performances:

* Bailey Munoz (Contemporary with All-Star Lauren Froderman) — Is there a human on Earth more adorable than Bailey? I’m starting to think there isn’t. Bailey wears his heart on his sleeve, both on stage and off stage, and he brought an emotional authenticity to this contemporary that several other contestants lacked during their performances. Unrelatedly, I’m still trying to figure out the physics behind some of those insane tricks, including the handstand/crab walk combination Bailey pulled off.

* Ezra Sosa (Hip-Hop with All-Star Comfort Fedoke) — Ezra received plenty of praise for this hip-hop routine, but I thought he could have sunk further down into his movements. If you’re attempting a hip-hop number next to Comfort, you’ve gotta match her level of swagger — and this time, Ezra didn’t quite get there.

* Vlad Kvartin (Contemporary with All-Star Melanie Moore) — Despite kudos from some of the other judges, Nigel pointed out that Vlad lacked a real emotional connection with Melanie — which is too bad, given how open and honest all of Melanie’s performances are. That said, Vlad nailed the choreography, even though the contemporary learning curve can be quite steep.

* Aleksandr Ostanin (Cha-Cha with All-Star Lindsay Arnold) — Every time Aleksandr attempted a lift during this number, my blood pressure went up just a tiiiny little bit. His preferred style is tap, so it’s not much of a surprise that he struggled with ballroom — but I seriously feared that Lindsay would get a head injury before this routine was over. (Aleksandr does rock the clean-shaven look, though!)

* Benjamin Castro (Salsa with All-Star Koine Iwasaki) — Although this salsa wasn’t perfect — Benjamin seemed to get a little lost in the middle — it was so fast-paced and physically demanding that I can’t hold Benjamin’s errors against him. With a little more time to practice, I think Benjamin could have executed this flawlessly (and what he did manage to do on Monday was pretty darn good, too). 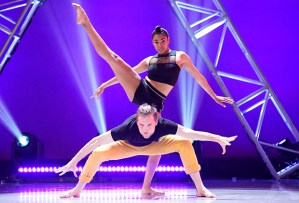 * Bryan “Clocks” Volozanin (Jazz with All-Star Jasmine Harper) — Clocks is an eccentric dude, and jazz is an eccentric style — so I was totally bummed when this routine fell as flat as it did. To be fair, Clocks was dancing alongside Jasmine freakin’ Harper, who could probably make brushing her teeth look like a fabulously intense activity. But Clocks’ performance was still lackluster on its own, full of half-hearted leaps and a bizarrely blank expression.

* Brandon Talbott (Salsa with All-Star Lindsay Arnold) — Brandon (or, rather, Brando) seemed to struggle with this routine in rehearsal, and I was really rooting for him to come out and wow us at performance time. And although the number wasn’t necessarily a dud — that cartwheel at the end was everything — it wasn’t quite sensational enough to leapfrog other performances from this episode.

* Nathan Cherry (Contemporary with All-Star Melanie Moore) — Dark horse alert! Before this episode, I’m not sure I could have told you Nathan’s name or preferred style. But he had a Moment (capital M!) with this performance, surprising all of the judges with his ability to emote and master intricate contemporary steps. I do wish he’d been a little more passionate at times — his expression was oddly dead-eyed in those final, climactic moments — but I appreciate any contestant that refuses to go down without a fight.

* Gino Cosculluela (Jazz with All-Star Lauren Froderman) — Gino has been a contender since his very first audition, so I wasn’t all that surprised to see him nail this jazz performance. He and Lauren did fall out of sync more than once, which was a bummer, but Gino still remains one of the most adaptable dancers in the Top 20.

* Eddie Hoyt (Hip-Hop with All-Star Comfort Fedoke) — Full disclosure: I had kinda gotten tired of the Eddie Hoyt storyline that SYTYCD was pushing on us this season, reminding us over and over that this is Eddie’s! Year! Of! Redemption! (Even though some of his Academy performances suggested otherwise.) But I was totally charmed by this hip-hop routine, which Eddie approached with surprising effortlessness and even more surprising swagger. (Seriously! Dude’s got swag!) Eddie, I’m sorry I ever doubted you or your year of redemption.

Then, it was time for the results, which shook out like this:

OK, your turn! What did you think of Monday’s episode? And which Top 10 contestant, guy or girl, are you rooting for at this point? Tell us in the comments!