Despite pushing themselves to the brink of collapse at The Academy, So You Think You Can Dance‘s Top 20 contestants can’t take a breather just yet.

This week and next week, the judges will whittle down the Top 20 to the Top 10, selecting five gals and five guys to advance to the live studio shows. But in order to earn one of those coveted spots, the dancers must perform for the judges one more time, attempting a style outside of their comfort zones with the help of SYTYCD All-Stars.

On Monday’s episode, it was the girls’ turn to (hopefully) cha-cha their way into the Top 10; let’s recap how each one did:

* Mariah Russell (Salsa with All-Star Jonathan Platero) — Not only did Mariah have a firm grasp on proper salsa technique, but she nailed each one of those insanely ambitious tricks. That one-legged somersault situation? That final flip, which left her head about a centimeter from the floor? All of it was very, very impressive — and appropriately sassy, too.

* Melany Mercedes (Hip-Hop with All-Star Fik-Shun) — Whether hip-hop is their preferred style or not, I pity anyone who has to dance with Fik-Shun, because the guy is just so good. Fik-Shun hits those hip-hop moves with such precision, and he’s so entertaining to watch… which made it all the more difficult for Melany to really shine in this number. Yes, she had a handle on the choreography, and yes, she embodied the silliness that this routine’s song demanded. (It’s literally called “Silly”!) But Melany just wasn’t hitting hard enough or sitting comfortably in the pocket, even though she was thisclose to really crushing it.

* Ashley Sanchez (Contemporary with All-Star Lex Ishimoto) — Lex is another formidable dance partner, given his versatility when he was on SYTYCD himself. Unfortunately, even though this choreography had a sadness and sensuality to it, Ashley didn’t emote enough or go far enough with her extensions, leaving Lex to do much of the heavy lifting in both areas. 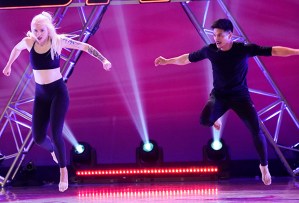 * Anna Linstruth (Jazz with All-Star Marko Germar) — I’m glad that the SYTYCD judges have continued to give Anna second chances; though she lacks the technique that some other contestants have, Anna is massively compelling to watch, and every season needs a few diamond-in-the-rough dancers. All of that could be said about her jazz performance with Marko, too: The technique could have been stronger, but Anna showed more emotion and served more face than some of her classically trained competitors.

* Madison Jordan (Cha-Cha with All-Star Kiki Nyemchek) — If Madison moves on to the Top 10 (and you can scroll down to see if she did), I hope she’ll start showing us that she’s actually having fun up there. Nigel had previously told her to soften things a bit and embrace the lightheartedness in dancing… and although she did smile throughout this entire cha-cha, I often got the sense that she wasn’t really comfortable, particularly when a big lift would come up. Madison is no doubt an inspiration, and I’ve been rooting for her since she auditioned — but I do think she’ll have her work cut out for her in the live shows. (That said, I agree with Mary and Laurieann: That slow walk across the stage was awesome.)

* Sofia Ghavami (Jazz with All-Star Marko Germar) — This jazz number fell utterly flat for me, and I’m not sure whether it was the choreography, Sofia’s performance or perhaps a combination of the two. (Even the song went nowhere!) It’s doubly disappointing because this was supposed to be Sofia’s redemption performance, after making it to the Top 20 last season, dancing a different jazz routine with Marko, and then getting cut. Unfortunately for Sofia, the steps in this piece didn’t give her an opportunity to put it all on the line; instead of conveying passion or desperation, the final result was just ho-hum.

* Sumi Oshima (Contemporary with All-Star Lex Ishimoto) — It’s really a shame that Sumi had such a hard time emoting with her face in this number; she actually did emote with her body quite well, especially when she curled her body around Lex’s, slowly drooped her wrists and turned her feet upward while clinging to him. But given how expressive some of the other contestants are (and how integral that is to any performance), this routine made it a little tougher to envision Sumi in the Top 10, even though she’s a hip-hop beast.

* Nazz Sldryan (Hip-Hop with All-Star Fik-Shun) — Prior to this number, Nazz wasn’t really on my radar for the Top 10 — but that changed after the first eight-count, when she popped out from behind Fik-Shun and proceeded to match his pops and locks (and even overshadow him!) for the entire performance. Honestly, this routine could be summed up in two words: Stank. Face. 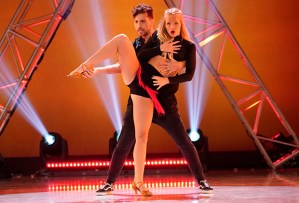 * Sophie Pittman (Cha-Cha with All-Star Kiki Nyemchek) — Having struggled with the cha-cha during the Academy, poor Sophie got saddled with that style again. And though she improved greatly upon her first attempt at the dance, Sophie still seemed to be holding back, always leaving a bit of tension in her arms and legs when she really needed to surrender to the sultry choreography.

* Stephanie Sosa (Contemporary with All-Star Robert Roldan) — Stephanie hit the SYTYCD lottery with this routine. An emotional contemporary piece? Check. Robert Roldan as her partner? Yep. Mandy Moore as her choreographer? You bet. It’s no surprise, then, that Stephanie turned in a lovely, heartfelt performance to close out the afternoon. Will it go on to be remembered as one of this season’s best? Eh, maybe not. But Stephanie still showcased versatility and vulnerability here — and she couldn’t have picked a better time to do that.

Once the ladies had turned in their performances, the judges had some difficult decisions to make — and the final results might surprise you. Here’s how they shook out:

I was disappointed to see Nazz get cut this time. Yes, she had some weak moments at the Academy, but so did every girl who moved on to the Top 10 — and since Nazz’s hip-hop with Fik-Shun was far and away the afternoon’s best performance, I really thought she deserved to go to the live shows. Also, it’s a bummer to see so many ballroom pros get cut in favor of a contemporary-heavy Top 5 (not that I don’t love me some emotionally compromising contemporary routines).

With that, I turn it over to you. Are you happy with these five girls? If not, who did you want to see advance? Drop all your thoughts in a comment below.