Disney Channel’s Descendants series has always blurred the lines between heroes and villains, but its third installment took that concept to the next level, transforming a prim-and-proper princess into a full-on wicked queen.

Last seen in the first Descendants movie, Audrey (played by Charmed‘s Sarah Jeffery) made a triumphant return in Friday’s conclusion to exact her revenge on Mal for ruining her life — even if that wasn’t necessarily her intention from the start.

Below, Jeffery speaks with TVLine about Audrey’s unexpected transformation, including why she relates to this version of her character much more than in the first Descendants movie.

TVLINE | First of all, because of your busy schedule with Charmed, I figured you’d just be making a little cameo in this movie. Boy, was I wrong.
I know! I couldn’t be in the second movie because of scheduling conflicts, but it worked out this time. I had a meeting with Disney before I signed on, and they told me what they had in store. I was shocked! It’s been a really exciting chapter, much more than I expected it to be.

TVLINE | So you knew about Audrey’s dark turn before you signed on?
I knew that she was going to take a dark turn, but I don’t think I realized how prevalent it would be until I actually read the script and got into the swing of things. I cried when I heard [“Queen of Mean”] for the first time. I just thought it was such a powerful song that told Audrey’s story really well. But I really didn’t realize how involved she was until I saw the movie for the first time, once it was all edited together. It felt like she finally got to tell her story.

TVLINE | And you finally get to talk about it! Disney Channel really wanted to keep her story under wraps.
Yeah, I couldn’t say anything. I could say that I was a part of it, and I could kind of tip-toe around mentioning that Audrey’s a little different. Really, the intention was to keep it completely a secret. It didn’t really work out. Fans are pretty dedicated, so between paparazzi shots and leaks, it wasn’t necessarily a secret anymore. Nonetheless, it was a very exciting reveal and I’m happy that it’s out there in the world now.

TVLINE | Not only is it out there, but judging by the YouTube comments on “Queen of Mean,” a lot of the viewers are choosing Audrey’s side.
Oh my God, that’s amazing. I’ve tried to be pretty active on Twitter, but that’s so good to hear. I really hoped people would feel that way, because I feel that way.

TVLINE | Audrey obviously took her revenge plan a little too far, but do you sort of sympathize with or understand her motives?
Yeah. I feel like I relate more to this Audrey than the Audrey from the first Descendants movie. This one’s a little more multi-faceted, and you can kind of understand where she’s coming from. She’s been pushed to a point where she feels like she has to act out. She had her boyfriend and her happy life and all this pressure from her family to become a royal princess — and then Mal steps in and takes it all away with a love spell. There was never an apology, Audrey was just shoved into the corner. She was always sassy, but that definitely exacerbated it. So when Mal and Ben get engaged, it’s the last straw. She actually went to destroy the crown, then got beckoned by the scepter’s evil power. Part of that was a choice, but part of that came from Maleficent’s evil energy. I do see part of Audrey in that, but there’s also a deeper, darker side that wouldn’t have been there if it wasn’t for the dark magic that flooded her.

TVLINE | OK, so it wasn’t just that she snapped. She was somewhat possessed.
With Audrey, the most poignant theme is that she’s both good and bad. It’s very unclear, and the lines become blurred. That stands for everyone. Good can exist in bad, and bad can exist in good. It’s not black and white. I think she kind of redeemed herself in the end, but in the world of Auradon, she’s got some damage control to do. It’s a very complex story, and I’m glad I got to bring it to life. 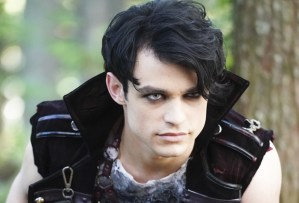 TVLINE | And she didn’t end up alone in the end. She may not have landed Ben, but she did have that meet-cute with Harry Hook.
She did! That was actually super last-minute, but it felt fun. They’re both these wild characters with an edge, so it just made sense. And Thomas [Doherty] is awesome, so we had a lot of fun with that.

TVLINE | I imagine you also had fun recording and performing “Queen of Mean.”
I feel so lucky. I can’t credit myself with writing that song, but I feel so lucky that they gave me such a powerful song to bring to life. I loved working hard on that and to have that solo moment is something I never thought I’d have. I’m really happy that people are connecting with it.

What are your thoughts on Audrey’s stint at an evil queen? Grade the movie below, then drop a comment with your full review.