If your biggest criticism of romantic comedies are that they end after a scant two hours, prepare to be charmed — hard — by Hulu’s Four Weddings and a Funeral.

The new series, from The Mindy Project‘s Mindy Kaling and Matt Warburton, is very much in the spirit of the 1994 British movie from which it gets its name. But the characters and situations are different, and the action unfolds over a TV season (the first four episodes of which began streaming today). In a moment, we’ll want to know what you thought of the premiere episode, “Kash With a K.” But first, a quick recap:

Maya (Game of Thrones‘ Nathalie Emmanuel) is a New York-based campaign manager who’s carrying on a secret affair with her married boss, a senatorial hopeful named Ted (Casual‘s Tommy Dewey). He keeps promising to leave his wife… later. Duffy (Search Party‘s John Reynolds) is a fumbling elementary school teacher in England who’s just had his novel rejected by a major publisher. Craig (You’re the Worst‘s Brandon Mychal Smith) is an American finance hotshot in love with an over-the-top WAG-type named Zara (Sophia La Porta, Ripper Street); he’s just asked her to move in with him, and she’s gladly accepted. And Ainsley (The Mindy Project‘s Rebecca Rittenhouse) is dating Kash (Nikesh Patel, Doctor Who), one of Craig’s finance bros.

Maya, Duffy, Craig and Ainsley all were part of the same study-abroad program in London during their college years, and they’re all still very tight. So tight that when Ainsley throws herself a rom-com-themed 30th birthday bash, Maya hops across the pond to join the England expats — she’s the only one who hasn’t relocated to London — to be there.

When her plane arrives at Heathrow, however, she accidentally grabs the wrong suitcase off the baggage carousel and can’t locate hers once she notices the mistake. An airline worker is dispatched to deal with the “shrieking American,” and the worker’s son — who just happens to be visiting his dad at work — is pressed into taking Maya to an offsite lost luggage facility.

While the pair are scanning rows and rows of identical black wheeled suitcases, they strike up a conversation about how he’s an actor and how she loves Mamma Mia! They also bond over how they lost their moms — Maya when she was 12, him when he was 20. “More recent,” he kids her. “Sadder.” The conversation gets deeper. “Have you ever had the feeling like you’ve gone down the wrong path?” she wonders, and he admits that he’s not an actor… he’s an investment banker who hates his job and has “always wanted to act.” There’s certainly something sparking between the two of them, but then Maya realizes she was sitting on her own bag the whole time, and it’s time to get her back to the airport and on her way. 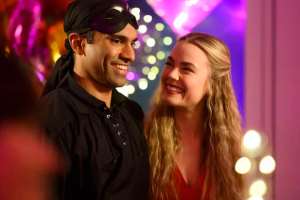 At Ainsley’s place, Maya reconnects with her bestie and meets her icy new friend Gemma (Downton Abbey‘s Zoe Boyle), who is married to a lush named Quentin (Sleepy Hollow‘s Tom Mison) and who is deeply jealous of Maya’s relationship with Ainsley. Eventually, it’s time for the party. And guess what? Maya’s suitcase pseudo-suitor is there: His name is Kash, and he’s Ainsley’s boyfriend. Oblivious to what’s gone on between her friend and her man, Ainsley talks about how Maya couldn’t stop bringing up the “super hot” and “bangable” guy she met at the airport. We learn that Kash works at Goldman Sachs with Craig, and that’s how he met Ainsley. 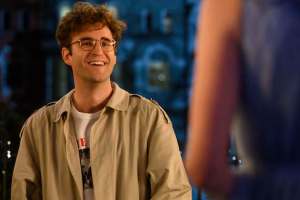 While Maya cringes with embarrassment over the Kash situation, Duffy waits outside for a moment he’s been working up to for years: He’s finally going to profess his love for Maya. But, distracted by meeting Ainsley’s main squeeze, Maya totally forgets that she said she’d come out and chat with him. After processing the awkwardness with Kash, Maya calls Ted… who shocks absolutely no one, including Maya, when he admits that he didn’t ask his wife for a divorce like he planned. They’re just so close to maybe winning the Senate seat, he reasons, and a bummed-out Maya agrees it’s not the time. 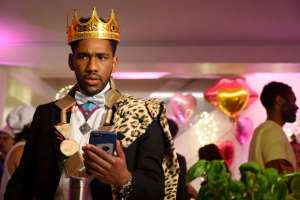 A year later, a title card informs us, Ainsley and Kash are getting married. And Maya is psyched, because a) Ted won his Senate race, b) he’s announced he’s leaving his wife, and c) he’s planning on attending the London wedding with Maya. But then news of Ted’s affair hits the news — and Maya is gutted when the scandal that’s outed is his dalliance with his dogwalker, a New York University student. “We bonded over my Daschunds and it got a little nuts,” he texts Maya, part of his flurry of apologies. But she’s done, and she boards her flight to London with a heavy heart. Ainsley meets her at the wedding with a sweet spate of Love, Actually-like signs about how she told her so and how Maya deserves better, and it’s quite cute.

The next morning, Craig and Maya go for a run so he can tell her about a development we saw in its infancy (pardon the pun) at Ainsley’s party the year before: A woman contacted him saying that he fathered her daughter, and now he’s pretty sure he’s got a kid. But he hasn’t told Zara about it. The girl’s name is Molly, he points her out to a shocked Maya, and Craig watches (from a distance) with pride as she plays soccer in a park. But he wants Maya’s help in making everything right with everyone. “You’re a fixer,” he cries. “Fix this!” Back at home, Zara finds a jewelry box that she thinks is a gift for her… until she sees it’s an “M” pendant on a chain and jumps to the conclusion that Craig is in love with Maya.

Later, before the wedding ceremony, Kash is having serious doubts about spending his life with Ainsley. His dad counsels him that he’s always made the right decisions — though we know he hasn’t, because he told Maya as much during their baggage date — and then running into Maya a few minutes before the festivities get started doesn’t help anything.

During the proceedings, bridesmaid Gemma nails her reading by turning it into a concert courtesy of Emeli Sande, who cameos. Maid of honor Maya bombs her reading (she forgot her notes after running into Kash) and tries to repurpose the “Gangsta’s Paradise” lyrics in a way that will suit the occasion. It doesn’t work.Finally, it’s time for the vows. But when it’s his turn to speak, Kash can’t promise to love and protect Ainsley, yadda yadda, for as long as they both shall live. “I don’t think I do,” he says, looking panicked. “I don’t.” And that’s where the episode ends.

Now it’s your turn. Grade the episode via the poll below, then hit the comments with your thoughts!