Warning: The following contains spoilers from Season 7 of Orange Is the New Black. Do not keep reading until you have finished the series finale.

For Orange Is the New Black‘s Taystee, justice is not served. As the Netflix prison dramedy concludes, the inmate is likely to spend the rest of her life behind bars for a crime she did not commit. And yet, somehow, all hope is not lost.

In the 90-minute series finale, Taystee returns to her bunk to find an envelope from Tamika. Inside are the GED certificates for her four students, including the recently deceased Pennsatucky.

“I’m happy that [Taystee] finally gets to see some good come out of what she knows she’s capable of giving,” portrayer Danielle Brooks tells TVLine. “When she sees those GED certificates, specifically Pennsatucky’s, there’s a bit of, ‘OK, there is purpose for my life.'”

Coupled with the support of her friends, including Tamika, Suzanne and Mr. Caputo, Taystee finally finds it in herself to forge ahead. “It’s something to have another human being say, ‘I believe that your life is worth living.'” That, Brooks explains, is “what carries Taystee through, more than anything.”

After she decides to keep going, Taystee gets in touch with Judy King, and together they establish the Poussey Washington Fund, a micro-loan program for newly released inmates. Taystee also starts a financial literacy course to prepare the first micro-loan recipients for life on the outside.

For Brooks, the establishment of the Poussey Washington Fund is not a happy ending for Taystee. It’s just another step forward. “The happy ending went out the window a long time ago,” she says. “It was long gone even before [the life sentence], because I don’t think Taystee should even be in prison.” If anything, Taystee is on “a course toward newness,” and it was important to Brooks that that “newness” manifest itself in a physical way. She went to series creator Jenji Kohan and asked not to wear Taystee’s wig in the final scene. 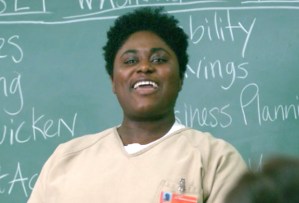 “I said to Jenji, ‘This feels like I’m still holding on to all of that weight… all that stuff that Taystee has gone through,’ and I asked her if I could take the wig off.” Kohan thought it was a great idea.

When asked what she thinks the future holds for Taystee, Brooks remains cautiously optimistic.

“She’s the type of person that, 10 years from now, would call somebody like [founder of the Equal Justice Initiative] Bryan Stevenson and be like, ‘Hey, can you help me, because I was wrongfully accused.’ And I think he would help her out,” she says. “I think it’s just a matter of time for the system to change, and for Taystee to get the justice that she deserves.”