Warning: The following contains spoilers from Season 7 of Orange Is the New Black. Do not keep reading until you have finished Episode 12.

The penultimate episode of Orange Is the New Black ends with one of the biggest tragedies in in the series’ seven-year history. In the very last scene, Taystee enters the laundry room to find that Taryn Manning’s Pennsatucky has suffered an (accidental?) overdose. She cries out for help, but it’s too late. Pennsatucky is dead. 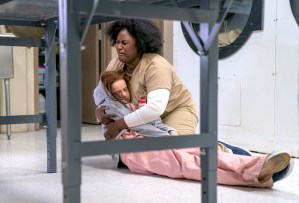 For Taystee’s portrayer, Danielle Brooks, reacting to a character’s demise is nothing new. It’s hard to forget how Taystee wailed back in Season 4 when she first saw Poussey on the cafeteria floor.

“I’m not gonna lie to you. I was thinking, ‘Taystee, how many times do you have to go through this?'” Brooks tells TVLine with a laugh. “It’s been a lot.” And being the character called on to respond to some of the series’ most devastating moments has not gotten any easier over the years.

“It gets harder on so many levels,” Brooks says. “From a technical standpoint, I’m trying to challenge myself. These aren’t the same people, so every breakdown I’m having as Taystee has a different weight to it. I don’t want to give the audience the same old crying and the same old whining. I want it to cater to whoever’s dying, or whatever the situation is.”

Taystee’s role as Pennsatucky’s GED tutor paved the way for a new and unlikely friendship this season. The “lifer” and the reformed meth addict are two characters you’d never expect to cross paths, and Brooks was excited to explore that odd-couple dynamic.

“Taryn Manning is someone that I’ve always wanted to get to work with. I think she’s so freaking brilliant,” Brooks says. “She lives her character through every ounce of her hair… through every pore in her body.”

Penn’s death comes at the end of a particularly disheartening episode for Taystee. In the beginning, her attorney informs her that Suzanne’s testimony wouldn’t be enough to get her life sentence overturned. Hopeless, she decides that she’s going to try and kill herself again, this time using the fentanyl given to her by Daya. She’s on her way back to her cell to go through with the suicide, when a flickering light in the hallway triggers a new flashback, circa Season 1: An out-on-parole Taystee gets a call from Poussey (played by former series regular Samira Wiley). Taystee tells P that she’s struggling on the outside, and P encourages her to “hold on a little longer.” She promises T that “there’s good s—t working its way to you that you don’t even know about.” 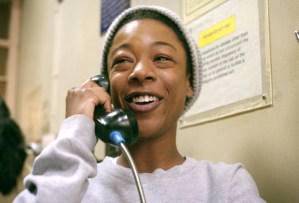 “Doing a flashback in the seventh season [of a show] reminds you of how far you’ve come, especially with my girl Samira [Wiley],” Brooks says. “We’re both cut from the same cloth. We knew each other before [the show] and went to the same college. We’ve gotten to take this journey together, and I’m glad that we got that reflective moment with each other — even if it was through a phone call. Just hearing her voice was enough to remind me of the plethora of blessings that have manifested themselves through this process, and what we’ve been able to accomplish, together and separately.”

Hit the comments with your reactions to Pennsatucky’s overdose and Poussey’s brief return, then check back Sunday afternoon for our series finale recap.