Superheroes are preening sacks of something-or-other in Amazon’s The Boys, the comic-book adaptation helmed by Supernatural‘s Eric Kripke. Though seemingly upright and good-hearted, the “superabled” men and women of a league known as The Seven actually are degenerates who overindulge in every vice and even kill the innocent — and when an average Brooklynite named Hughie watches his girlfriend become part of the supes’ “collateral damage,” he decides to do something about it.

In a moment, we’ll want to hear what you thought of the series premiere. But first, a quick recap of Episode 1, “The Name of the Game.” (Note: All eight episodes started streaming today.) 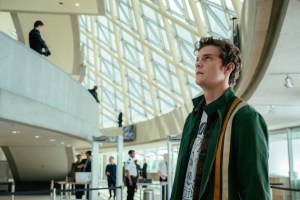 We’re introduced to The Seven via two of its members, the Captain America-like Homelander (played by Banshee‘s Antony Starr) and the Wonder Woman-ish Queen Maeve (Hell on Wheels‘ Dominique McElligott), as they stop some bank robbers from getting away with their crime. In an electronics store in Brooklyn, Hughie (Vinyl‘s Jack Quaid) watches news footage of the aftermath and then meets up with his girlfriend Robin. They’re standing on the street, talking about how they want to live together, when all of a sudden, Hughie is covered in blood: It’s Robin’s, who is dead and in a zillion pieces after a supe speedster named A-Train (Survivor’s Remorse‘s Jessie T. Usher) literally ran through her. A-Train pauses for a moment when he realizes what’s happened, but then he mumbles something about how he can’t stop, and he runs away while Hughie screams, realizes he’s still holding Robin’s dismembered hands.

Meanwhile, in Des Moines, Iowa, a petite blonde named Annie performs feats of strength — lifting cars, punching through brick walls — and we soon learn why. She’s a local hero named Starlight who wants to become the next member of The Seven. At her audition, she mentions that she’s been superabled since birth, then earnestly wonders, “Since when did hopeful and naïve become the same thing? I mean, why would you get into this business if not to save the world? That is all I have ever wanted. And that’s why I have always wanted to be in The Seven.”

The earnestness works: She gets a call summoning her to New York City for her grand unveiling. 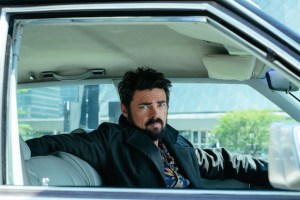 In the weeks after Robin’s death, Hughie gets madder and madder. First, he bristles at A-Train’s less-than-sincere public apology for her death. Then, he turns down an offer of $45,000 in exchange for signing a non-disclosure agreement from Vought, the corporation that manages more than 200 superheroes — including The Seven — and is the money-printing machine behind their movies, theme parks, endorsements, etc. So when a shifty Brit named Billy Butcher (Almost Human‘s Karl Urban) shows up and says he’s an FBI agent who wants to help Hughie take down the supes? After a brief bit of waffling, Hughie’s on board.

At Vought’s annual shareholders’ meeting, an executive named Madelyn Stillwell (Leaving Las Vegas‘ Elisabeth Shue) talks about the company’s desire to have a Vought hero in every American town. Then she introduces an Aquaman-like The Deep (Gossip Girl‘s Chace Crawford), who explains that The Lamplighter has retired but Stargirl will take his place! The Deep then introduces her, and she seems happy but a little overwhelmed by all the applause. 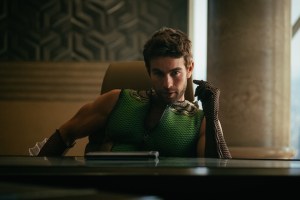 Later, The Deep shows her around The Seven’s meeting room. “I used to stand in the mirror, pretending to be where I am right now,” she marvels, admitting she used to have a crush on him. And when she turns around to face him… he’s pulled down his pants and is, shall we say, tickling his tilapia? She’s horrified and quickly turns away, but it’s about to get worse: He says if she doesn’t perform oral sex on him, he’ll tell everyone she attacked him. And because he’s second-in-command, they’ll oust her. We get a brief peek at Starlight’s abilities — she seems to be able to summon a huge amount of power that can knock out lights and electronics, and her eyes go all gold — but eventually she gives in. The next time we see her, she’s vomiting in the headquarters’ bathroom… and getting no sympathy from Queen Maeve, who merely advises Starlight not to let anyone see her so upset.

Starlight ditches her costume and cries on a bench in the park. It turns out that Hughie is eating lunch on the same bench, and when he asks her what’s wrong, they strike up a conversation. “Turns out, I’m not who I thought I was,” she says dejectedly after giving him a vague version of her run-in with The Deep. So Hughie gives her a pep talk, and it bucks her up. Before they leave, she introduces herself as Annie. 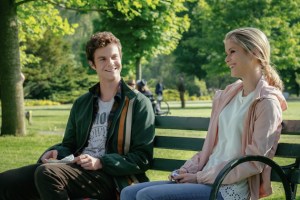 Later on, Starlight shows up for her first Seven meeting. That’s where we see Translucent (who can effectively become invisible) and Black Noir, who’ve joined Queen Maeve, A-Train, The Deep and Homelander around the table. They’re arguing about copyright infringement and such, and it seems pretty ridiculous and petty for those who’ve promised to protect the planet. But Starlight makes it clear to The Deep that she’s not going to take any more of his crap, so there’s that.

Later, Hughie enters Vought headquarters for a meeting on which he (at Butcher’s urging) insisted. He gets a personal if halfhearted apology from A-Train and signs the NDA. At the same time, he plants a bug on the underside of the conference table, giving Butcher a direct line into the supes’ meeting place. Afterward, Hughie hopes to help Butcher some more, but the Brit thanks him and ditches him back at the electronics store.

That night, at closing time, Translucent — who noticed Hughie planting the bug — shows up and starts to beat up the defenseless clerk, wondering for whom he works. Thank goodness for Butcher, who drives his car through the store’s front window just in time to save Hughie from getting squished by a TV. After an entertaining fistfight (remember, Translucent is still invisible), Hughie helps Butcher electrocute the supe… possibly killing him. Oh, and one more thing: Butcher admits that he’s not actually a Fed. “Then who the f—k are you?!” a fed-up Hughie yells.

Elsewhere, on a private jet, a Baltimore official and his young son fly home. Earlier, we’d seen the official in negotiations with Madelyn for a superhero to be stationed in his city. When her price was too high, he played hardball by raising the issue of something called Compound V. While Madelyn said she had no idea what he was talking about, she eventually brought the price down. But it didn’t matter: Homelander flew next to the man’s plane and, with a quick couple of beams from his eyes, set it aflame and careening toward the ground.

Now it’s your turn. What did you think about the premiere? Grade it via the poll below, then hit the comments with your thoughts!