Warning: The following contains spoilers for the midseason finale of Fear the Walking Dead.

Given that, when last we saw Fear the Walking Dead’s Alicia, she was covered in radioactive walker blood, it was safe, if unpleasant, to assume that she was a goner. But it turned out that rumors of her imminent death were greatly exaggerated. Not only did she survive Sunday’s midseason finale, so did everybody else. Of course, that’s not to say that there weren’t potentially life-changing developments. Read on, and we’ll go over what they were…

‘A NUCLEAR PLANT IS MELTING DOWN, BUT I DID JUST HAVE A HOT SHOWER, SO THERE IS THAT’ | As “Is Anybody Out There?” began, Logan was chagrined to learn from his people that they had been unable to locate a certain something that we wouldn’t find out until the end of the hour was Clayton’s journal. Of course, the gang couldn’t have cared less about Polar Bear’s altruistic plans, they merely wanted to know the location of the spot at which he was producing gasoline (an especially hot commodity, what with so much going bad in the years following the apocalypse). Meanwhile, Alicia showered off those nuclear guts and scoffed at Grace’s assurance that she’d be fine. Well, “you don’t know that you won’t be,” Grace argued. Well, OK, then!

At the truck stop, June told Dylan that, despite all the bad that they had seen, she still believed in good — so yeah, she believed that John would make it to the plane in time to take off with them. And right on cue, he and Dwight found a working SUV that could speed them to the group’s makeshift airport. Elsewhere, Sarah arrived at the mill just in time to catch Logan leaving and ask this unlikeliest of allies for help lighting up the runway. Pass, he predictably said. “Not how I operate.” In response, she told him how much she regretted having stolen Clayton’s rig and warned that if “you walk away from this, from helping people who really need it, you’ll spend the rest of your miserable life trying to make up for it, believe you me.” Again, pass. “Unlike my partner, I’m still above ground,” he noted. And his way of living had kept him that way. Luckily, Daniel had overheard the problem Sarah & Co. were having on his radio and showed up with Christmas lights to illuminate the runway. 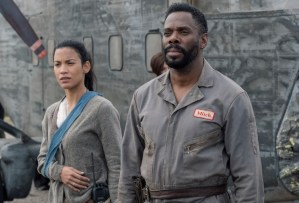 ‘WE NEED TO LOSE THE DEAD WEIGHT NOW’ | Too far from the truck stop to make it in time for takeoff on foot, John and Dwight’s car conked out — some of that aforementioned bad gas. But at least they were back in radio range, so John could not only give June a heads-up but use Sherry’s words to make his sweetheart vow to find a reason to live and do exactly that, no matter what. And no sooner had he gotten June’s tearful promise from her than the walkie-talkie died. Dagnabbit! Luckily, a note painted on a tree —”If you’re reading this, it means you’re still here” — gave him the bright idea to look for Sherry’s car. At that moment, Morgan radioed that everyone had to get on the plane immediately — his, Grace and Alicia’s attempt to lead away the herd of walkers had been thwarted when the meltdown siren had stopped and the meltdown had begun. They had to get out of Dodge at once!

As Al and Strand got the plane started, he took a moment to tell Alicia, “She’d be proud of you.” (Madison shout-out!) “Not just of me,” Alicia replied. And I can’t believe I let this show emotionally manipulate me the way it does! Subtle, it is not. Ultimately, John and Dwight made it to the plane in Sherry’s car just in the nick of time to take off with June and everyone else. As they flew over the mountains, the view took away Strand’s breath. But “it’s not the prettiest thing I’ve seen since the end of everything,” said Al. (At least I think those were her exact words. In any case, it was a nice throwback to Isabelle and much more sensible than Al’s middle-of-a-crisis heart-to-heart with June.) 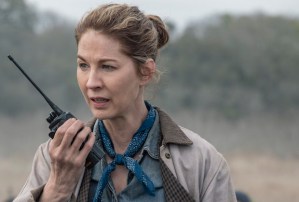 ‘I’M GONNA GO THROW UP NOW’ | During the bumpy flight, Morgan reiterated to Alicia that going forward, they were going to have to figure out how to not just help others but live their own lives, too; Grace broke Morgan’s stick in half so that he could safely keep it; and John tied a candy wrapper into an engagement ring to pop the question to June. (Need I mention that she said yes? She practically had hearts dancing around her head like a smitten cartoon character.) When the plane neared the runway, a walker lurching toward Wendell tripped over the plug to the Christmas lights. “We’re flying blind!” cried Al. Desperate to help his friends despite the approach of more walkers, Wendell hurled himself out of his wheelchair and dragged himself a ways to plug the lights back in. Perhaps as a reward for his selflessness and bravery, perhaps because the walkers weren’t all that hungry, he wasn’t bitten.

Once the plane was on the ground, Morgan was as surprised as I was that he got to say, “We’re all still standing.” Metaphorically standing in Wendell’s case, but we knew what he meant. Right and left, there were happy reunions, including at last one between Alicia and Daniel. Morgan even received a call from a woman in need of assistance. Was Season 5A really going to end on this upbeat a note? Pretty much. But first, Logan was going to show up to reveal what he’d been looking for at the mill and ask if he could take the group to Clayton’s “oil refinery,” for lack of a better term. Why should they trust him? 1. The convoy he’d been with initially would kill all of them if they even knew he was there. 2. “I got s— I gotta make up for, too.” And 3. if they didn’t let him take them there, the convoy would beat ’em to it.

So, do you believe that Alicia is really going to be OK? Would you trust Logan? And what did you think of the high-flying midseason finale overall? Grade it in the poll below, then hit the comments.