The Good Doctor‘s love life just got a whole lot more interesting: Jasika Nicole, who previously recurred as Dr. Carly Lever on the ABC medical drama, has been promoted to series regular ahead of Season 3, TVLine has learned exclusively.

As viewers will recall, the Season 2 finale ended with Shaun putting on a suit and going over to Carly’s house, where he asked the pathologist out to dinner. This was after a blatant misdirect, in which Lea came home to find a suited-up Shaun holding a bouquet, leading viewers to suspect that he was about to ask his roommate out on a date.

“The audience wants to see Shaun with Lea [together], and I kind of do, too, but we’ll see where that goes,” executive producer David Shore previously told TVLine. “At a certain point, I was going, ‘Oh, the audience is going to hate me for not having him ask Lea out,’ but then I thought just seeing him ask anybody out — and Carly is someone we care about, and somebody who cares about Shaun — is going to be a lovely victory. All [of those romantic pairings] are on the table and continue to be on the table as we go forward.” 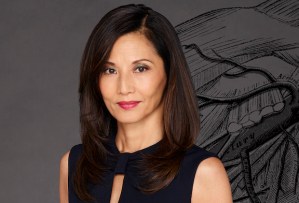 Meanwhile, original series regular Tamlyn Tomita, who plays San Jose St. Bonaventure Hospital Board chairwoman Allegra Aoki, will now be recurring. The status change was foreshadowed in Season 2 as Tomita only appeared in nine out of 18 episodes.

Are you looking forward to seeing more of Carly on The Good Doctor?