Ooh, baby, do you know what that’s worth? Ooh, Heaven is a place on Earth. Damn you Belinda Carlisle: After watching this week’s Handmaid’s Tale, my brain is incapable of going for very long before the chorus to “Heaven Is a Place on Earth” kicks in and obliterates all other thought. They say in Heaven, love comes first See? It’s permanently 1987 up in here. And while We’ll make Heaven a place on Earth my mental torture Oooooooooh is nothing compared to what June goes through during the hour, Heaven is a place on Earth it’s no picnic to have one-fifth of The Go-Go’s taking up so much real estate in my mind. OOOOH HEAVEN IS A PLACE ON EARTH.

Anyway, read on for the highlights of “Heroic.”

WALKING PARTNERS ‘TIL THE END | The episode opens with a bit of a surprise: Despite getting gunned down in Loaves and Fishes at the end of last week’s hour, Ofmatthew isn’t gone… at least, not technically. She’s brain dead and hooked up to life support at the hospital, where she’ll stay until the baby comes to term. June kneels on the floor at the foot of her bed. The punishment is Aunt Lydia-imposed penance for her disobedience, and June will be there until her fellow ‘maid goes into labor. It’s been 32 days so far — more than enough time to realize that the beeps and dings from the various machines keeping Ofmatthew alive kinda sound like the chorus of that blasted Belinda Carlisle song. 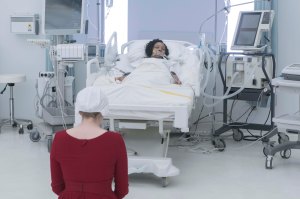 The wives, including Ofmatthew’s mistress Mrs. Calhoun, come to pray. They place their hands on her belly and bow their heads. Sometimes, Lydia marches other handmaids to kneel with June; during one of these visits, we see that Janine’s eye socket was damaged when Ofmatthew brained her, and she’s self-conscious about how gross it looks now. Apart from the visits and the medical staff doing its rounds, though, June is there alone. And the isolation is starting to mess with her.

One night, she teeters to a standing position — all of that kneeling apparently isn’t great on the knees — and approaches the bed. June curls her hand around the tube helping Ofmatthew breathe, cutting off her air supply, but quickly lets go and hobbles back to her cushion before the nurses run in to see what’s causing the alarm. In voiceover, June wonders if she’s gone crazy and she’s undergoing some kind of therapy; at least then, she reasons, she could get better “and this would all end.”

JUNE MAKES A (BAD) PLAN | During another visit from Lydia and her girls, Ofmatthew begins to have seizures. The handmaids (save June) are ushered from the room while Lydia loudly prays for the baby’s and Ofmatthew’s survival. In her head, June prays for their deaths.

As the doctors are stabilizing Ofmatthew, a really unhinged-looking June begs Aunt Lydia to go home. “I don’t feel well,” she whimpers. “God never gives us more than we can handle,” Lydia replies. “Are you sure?” June asks, her eyes red and shifty. And don’t think she doesn’t notice when one of the doctors drops a scalpel into the sharps box on the wall after a procedure, then leaves the room after Ofmatthew’s vitals are back to normal.

Later on, June reaches into the sharps box and gets a needle in her fingertip for her troubles. (Side note: Even just typing that sentence gives me full-body revulsion. Watching this scene was HARROWING.) She removes it and goes back in, eventually finding the surgical implement she’s looking for. June is standing near Ofmatthew’s bed with the weapon in her hand when Janine comes in — she’s now a patient, as well, because her open eye wound got infected.

Pure, sweet Janine confesses that she hasn’t been praying for Ofmatthew (whose real name is Natalie) on account of her part in Hannah’s disappearance. She thinks her lack of prayerful attention caused the seizure, and she feels bad about it. So she forgives Natalie at her bedside and says she wants her to find peace. And that’s where June sees an opportunity.

“I know how we can help her,” June says, smiling in a way that even oblivious Janine registers as Creepy and Not OK. Those feelings are validated when June tries to hand her the scalpel and urges her to put Natalie out of her misery. “Don’t do that. She’s one of us,” Janine argues, laying her palms on the unconscious woman’s bulging abdomen. June backs down and smiles, but she won’t surrender the scalpel. “When did you get to be so selfish? Everything is always about you now, your problems,” Janine says, narrowing her eyes as June angrily tells her to leave. “You’re different,” the one-eyed handmaid says in parting. “I don’t like it.”

SHARP OBJECTS | The next day, June is looking even more peaked when the Calhouns visit their handmaid. As some preteen girls in pink walk by, the doctor mentions that the girls aren’t sick: They’re there for their menarche exams. “They’ve flowered. How lovely,” Mrs. Calhoun says. “That will be Hannah soon,” June voiceovers. “Too soon.” Then she goes back to wondering who’d be best to kill… until Serena walks in and makes the decision for her.

Everyone else has left the room when June asks if she can speak to Mrs. Waterford. “Come closer. It’s a secret,” June says in a crazed way that might as well be a neon sign saying “I AM DELUSIONAL.” She stumbles to her feet, and Serena goes to help her. “You’re not well,” Mrs. Waterford says, and June confirms that before slashing at her arm. I’m pretty sure she only manages to cut the sleeve of her dress? A shocked Serena gets the knife away from June but cuts June’s hand in the process; I’m not entirely sure June even notices her injury as she chants, “This has to end. This has to end.” Serena looks disgusted. “You were supposed to be one of the strong ones,” she hisses before running to get the doctor. 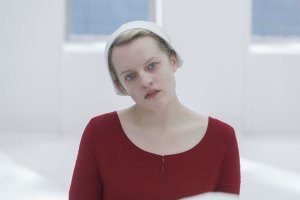 June skitters back against the wall, leaving bloody handprints all over the floor and probably sure she’s just booked herself a one-way ticket to The Colonies. When they return, though, Serena lies and says that June cut herself. The doctor (hi, Ally McBeal‘s Gil Bellows seems completely cool with this, and he puts the scalpel back in its receptacle, then stitches her hand. She’s surprised he doesn’t want to get her in trouble for wanting to harm his patient, but he tells her that his patient is the baby — which she thinks is a load of BS. As it turns out, he knew her mother, Holly — who also delivered babies, you’ll recall — and laughs in a friendly way as he remembers that she was “scary.” June still isn’t in her right mind. “You should know I was going to kill Serena. And her. And you, too,” she says, but he sees it all as suicidal thinking (after all, she’d wind up on the wall if she went through with it) brought on by too much alone time filled with despair. She starts to cry as she says she feels hopeless, and the feeling came on around the time “I realized I probably won’t see my daughters again.”

She points out that Natalie is someone’s kid, too, but the doc won’t take the bait. “I honor the handmaid’s life by saving her child,” he says. “How will you honor your daughters?” Which is nice and all, but keeping someone alive as a human incubator when she didn’t even want to be pregnant in the first place and was raped to become so? Sorry, doctor: You seem kinder than most guys in Gilead, but there’s no honor in that.

MAYBE I WAS AFRAID BEFORE BUT I’M NOT AFRAID ANYMORE | One night while June is in her cot in the corner of Natalie’s room, a bunch of the patient’s alarms start going off: Natalie is hemorrhaging. She’s wheeled into the surgical suite for an emergency caesarian section. As June watches from the other side of the window, Natalie’s son is born. He’s really tiny, but he’s alive. 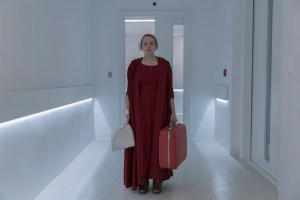 The next morning, June prepares to leave the hospital. She runs into a teen girl there for her menarche exam, and the girl parrots Gilead’s teachings about how all she wants to do is have some stupid guy’s babies. It seems to stir something in the handmaid, who meets Aunt Lydia outside and tells her she’d like to stay with Natalie, who’s been taken off of life support. “That would be very kind of you,” Lydia says approvingly.

So June sits by Natalie’s bedside and apologizes “for being such a s—t to you. I got lost, I think. Not that that’s a good excuse, but I don’t really have another reason. They just take everything from you, you know?” She notes that the baby boy is a fighter, and “he doesn’t deserve to grow up in this place. He deserves to be free… So Natalie, I’m gonna get them out. I’m gonna get out as many children as I can.” She admits she doesn’t have a plan yet, but she wants to make Gilead know how it feels to have its kids ripped away. “It’s their turn to hurt,” June says defiantly, seeming more like her old self again.

Then June sings “Heaven Is a Place on Earth” to Natalie and cries a little bit. As the hour ends, the monitors beeping in time with Nat’s heartbeat and breathing start to slow.