Ian McShane will soon cross paths with an elite squad known as the Special Victims Unit. The American Gods and Deadwood star is set to appear in Law & Order: SVU‘s Season 21 premiere, TVLine has learned.

McShane’s character is described as “a charming and high-profile media mogul who takes on Olivia Benson and the SVU squad after being accused of sexual assault.” The episode airs Thursday, Sept. 26 at 10/9c on NBC.

* Former The Chew co-host Daphne Oz has been added to MasterChef Junior‘s judging panel ahead of the just-ordered Season 8.

* Dynasty‘s Michael Michele — aka Dominique Deveraux — has been promoted to series-regular status ahead of Season 3 (premiering Friday, Oct. 11 at 9/8c on The CW), according to the actress’ Instagram. 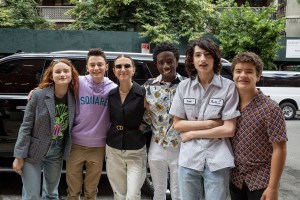 * The cast of Stranger Things will appear in an episode of Apple’s Carpool Karaoke: The Series, which on Wednesday was picked up for Season 3.

* Game of Thrones-turned-Aquaman star Jason Momoa will voice himself in an upcoming episode of The Simpsons, EW.com reports. An airdate has not yet been announced.

* SpongeBob SquarePants has been renewed at Nickelodeon for a 13-episode Season 13.