The Originals‘ Joseph Morgan has found a juicy new part to sink his teeth into: The Vampire Diaries alum has been cast by Animal Kingdom as Colin’s brother, Jed.

And you shouldn’t be fooled by the actor’s bright smile in the exclusive image obtained by TVLine, either. According to TNT, not only is Jed unstable — which is really saying something, considering that his sibling isn’t exactly a portrait of mental health — he has “rejected mainstream society and chooses to live in isolation on a rural compound with his beleaguered wife and three children.”

Morgan will debut in the recurring role in Tuesday’s “SHTF” (9/8c) as part of the show’s extensive 1977 flashbacks that have been illuminating how Leila George’s Janine evolved into Ellen Barkin’s tough-as-leather Smurf. Unless I miss my guess, it will also turn out to be Pope’s uncle that in present-day the Cody clan’s cancer-stricken matriarch took off to see in the July 9 episode, “Know Thy Enemy.” (Though obviously, Morgan wouldn’t also be playing the 2019 version of Jed.) 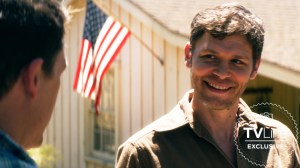 What do you think of Morgan’s casting? Do you suspect that an older Jed and/or his kids will wind up becoming a part of Animal Kingdom‘s cast in Season 5? Hit the comments.