Cancer be damned, Tuesday’s Animal Kingdom found Smurf hatching a new plot and taking off. The question was, against whom had she been plotting? Read on, we’ll go over the deets, then you can theorize away in the comments. 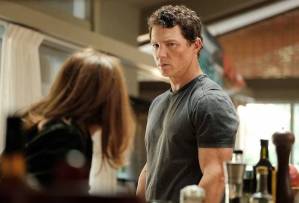 ‘SHE PROBABLY THINKS SHE’S GONNA LIVE FOREVER’ | As “Know Thy Enemy” began, we were still in Deran’s dark night of the soul. Adrian was confessing that he’d gotten caught working for Jack and had been pressed to work with the DEA for reduced charges. He was supposed to be done by now, but Pearce came along and changed the deal. In fact, unless Adrian informed on the Codys, there was no deal. He insisted that he hadn’t said anything, but Deran didn’t appear ready to hear that. He just put on pants and left their bedroom. The morning after, Adrian met with Pearce and said, “I can’t do this. Charge me.” Pearce, as you’d expect, scoffed. “Pretty boy like you won’t last six months in prison,” he suggested. Plus, “would Deran give all this up for you?” (Well, he did murder Colby for Adrian, so maybe… )

Meanwhile, Olivia couldn’t get over J’s dedication to his work for her mom. “So you’d rather stuff envelopes for Meredith than have sex with me?” she asked. “Can’t I do both?” he replied. Smooth, J. Very smooth. At Casa Cody, Angela was all — and I do mean all — about Smurf kicking the bucket. First, she asked Pope, as the likeliest person to care for his mother as her condition deteriorated, if he knew what she wanted. Then, she tried to make nice with the patient but was met with Smurf’s usual hostility and another bribe to go away and stay away. Was that dollar amount, Angela wondered aloud, the same as it had taken to kill Julia? (Hmm… ) When J arrived, Angela excitedly declared that Smurf was as good as dead, asked if she had a will and encouraged him to get what he had coming to him. 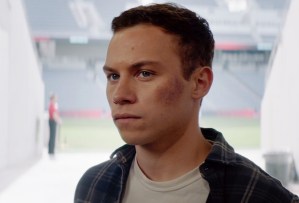 ‘IT’S ALL ABOUT SUCTION INTENSITY AND HOW IT FITS’ | Off his intense conversation with Angela, J continued to maintain to his grandmother that no one knew of anybody talking to the police. He also presented her with a new job: the Chronic Dread Festival. “What are we talking about, guitars?” asked Smurf. Much more than just musical equipment, said J, adding that they needed to move fast as he had an in to scout the job that very day. Rather than see Gia the fence herself to inquire about the value of the loot, Smurf sent J — that was how bad she was feeling. During the meeting, Gia said she was most interested in the lighting and sound boards but wouldn’t talk dollars with J… not until he revealed that Smurf had cancer. And at this point, isn’t it only Craig and Deran who don’t know? Worst kept secret ever!

Speaking of Craig, the least likely candidate for Father of the Year since Billy had spent his night putting together a crib for Renn — one that had gotten five stars on a moms website. She seemed to be as incredulous about his transformation into dad material as she was about the fact that she was really gonna have a baby. Back at Casa Cody, Pope rather sweetly inquired how his mom was doing and when her next chemo appointment was. There wouldn’t be one, she said. So what was he supposed to do when… you know? “Don’t worry, Andrew. I won’t leave you with a mess.” With that, she disinvited Angela from a family meeting over margaritas and guacamole, and gave the floor to J to present his plan to hit the Chronic Dread Fest. The guys were skeptical but agreed to scout it. 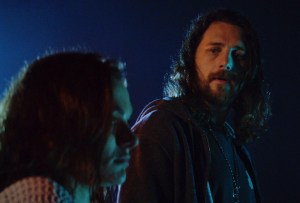 ‘THE BOYS DON’T HAVE TO KNOW EVERYTHING, DO THEY?’ | While the guys were busy, Angela let into the house an old friend for a catch-up. Familiar with the whole family, the woman asked whether Pope was still crazy. No, Angela replied, “just misunderstood.” (So maybe she cares at least a little?) Shortly, Angela admitted that none of the Codys knew why she’d really been behind bars — it hadn’t just been for B&E but armed robbery. (Perhaps Smurf did know, though, and that was why she later bought a whole bunch of high-powered firearms from Tina? As a way to frame Angela and get rid of her once and for all?) As Angela was hanging with her gal pal, Smurf surprised Neil (aka Detective Andre) at the driving range to demand the name of Pearce’s informant. Since he still didn’t have it, she growled that he’d better get it by the time she returned in a few days from a trip she was taking.

Backstage at Chronic Dread Fest, J assured his uncles that the security cameras weren’t an issue — the artists wouldn’t allow them to be switched on. Craig was nervous — it would be hard to get out fast if things went south. So J suggested that that wouldn’t be a problem, either — not if they were in an ambulance. When Craig returned home afterwards, he found a note from Renn saying thanks for everything, but she had gone to Tasmin’s. Post-scouting mission, Pope dropped by Deran and Adrian’s and found the latter packing to stay at his sister’s. Immediately, Pope went to the bar and accused Deran of telling his boyfriend about Colby. That wasn’t why Adrian was leaving, Deran said. He’d cheated on Adrian. Knowing that was a lie — and knowing Deran had lied about Colby having a gun — Pope demanded the truth. “This isn’t some rite of passage,” Deran barked. “I don’t want this! I’m not you!” First of all, ouch. Second of all, that being the case, Deran didn’t wanna hear about what he would have to do if Adrian told anyone about Colby’s murder/burial.

‘LET ME KNOW IF ANYONE DECIDES TO DO ANYTHING USEFUL’ | At Olivia’s, J asked if they could have sex up on the roof where everyone could see them. Fun as that might have been, what he really wanted to do was steal Chronic Dread Fest passes from Meredith’s office — where he got busted by Olivia, who conveniently didn’t realize that she’d busted him at all. At the beach, Craig caught up with Renn and confronted her about bailing. “S— was getting weird,” she said, adding that she’d already messed up her life, she didn’t need to mess up his, too. As the hour drew to a close, Deran sought out Adrian at his sister’s. Adrian had thought his boyfriend had wanted him gone. “You been talking to the cops, working with them… talking about my family,” responded Deran. Again, Adrian insisted that he hadn’t said anything. But after months of lies, how could Deran believe him? Adrian had thought he could make it all go away, he said. Alas, “it’s not going away.” After Deran warned Adrian that Pope could never, ever know that he had talked to the cops, he asked his beau to come home. “You and me, we’re gonna figure this out,” he said. Finally, armed and flush with cash, Smurf stole a car from the airport and took off. But to… what? Settle an old score? If so, with whom?

Aaand in our 1970s flashbacks, Janine was eager — make that anxious — for the group to move along; they’d stayed in one place too long. But Jake, in particular, was happy to stay put, as he was now seeing Pam the waitress. Later, Janine told Manny that she didn’t trust Pam, someone they knew zilch about. He suggested that she was picking fights with the newbie because she was jealous, which of course Janine denied. That evening, Colin, too, questioned whether his lover disliked Pam because of Jake. Or did she just hate the fact that Pam brought her kid around all the time? But no sooner had he reassured her that not everyone was out to get her than the gang discovered that Pam had split with all their money and the van. (Even then, Smurf loved being right.) In other developments, it turned out that Janine’s tummy aches hadn’t been due to Pam’s pancakes: She was clearly expecting, presumably Colin’s twins, Pope and Julia.

So, what did you think of “Know Thy Enemy”? Who is Smurf taking off to get? Or does it all have to do with Angela? Comments, theories, guesses below.