There was a conspicuously empty seat on the couch next to Andy Cohen as the Real Housewives of Beverly Hills Season 9 reunion kicked off — but absence definitely didn’t make anyone’s heart grow fonder.

Andy is joined in Part 1 of the reunion by Denise, Erika (looking… tastefully understated, actually?), Lisa Rinna (sporting a blonde wig, for some reason), Kyle, Teddi and Dorit (who’s dressed like an android pop singer from Blade Runner 2049) — but no Lisa Vanderpump. Bravo twists the knife further by flashing back to Adrienne Maloof’s Season 3 reunion no-show, which Lisa called a “mistake” at the time. (Gotcha, LVP!) Lisa is leaving the show entirely, telling the press that “I have no inclination to reunite with the women who’ve been harassing me for ten months.” The other ladies roll their eyes at this, and at a source close to LVP telling Radar Online — that troublemaker! — that Lisa is being “burned at the stake, nailed to the cross and stoned by her co-stars all at the same time.” (“Get off the cross. We need the wood,” Erika grumbles.) 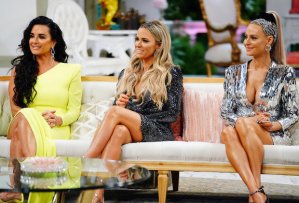 Kyle thinks Lisa didn’t show up because “she has been unmasked,” but she did bring her ex-pal a very belated birthday gift from Manolo Blahnik. And Bravo is determined to wring every last drop of drama out of this feud, cutting to a car arriving mid-reunion… but it’s just Camille. Otherwise, Part 1 is kind of a snooze, rehashing Lisa Rinna’s Twitter beef with Harry’s ex Nicolette Sheridan, Denise’s surprisingly smooth addition to the cast (did you know she was once married to Charlie Sheen?!) and Kyle’s high anxiety over her mammogram results. That last one, though, does allow a viewer to ask Dorit if her “gigantic breast implants” affect her mammograms. Well, then! Plus, Erika gets another dig in at LVP by declaring Kyle “the true queen” of RHOBH, adding curtly: “Look who showed up.”

Things perk up a bit when Camille joins the group: We see highlights of her sunny Hawaii wedding… and of Mauricio getting hilariously drunk on mai tais. She insists she’s lower maintenance now than when she was originally on the show, but she does toss some unmistakable shade Denise’s way when she talks about her lucrative divorce settlement with Kelsey Grammer… and how she “earned” every dollar of that settlement, heavily implying that Denise did not. Denise feels the burn: While getting her makeup touched up, she says of Camille, “Maybe she’s not a happy person.” 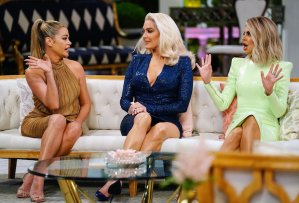 The ladies do bond, though, over some steamy sex talk, including Denise’s confession that she got her man Aaron a “happy ending” massage. Erika delightfully chimes in that when her hubby used to win big in Vegas, the casino would send a couple of “back scratchers” (!) up to his room to take care of him. We also cover Aaron’s legendarily large penis — Denise confirms it’s “bigger than Kyle’s shoe,” which makes Andy’s jaw drop — and the “kinky s—t” that Lisa and Harry get up to in the bedroom. She admits to some role-playing and strip-teasing, but her ultimate sex advice to women everywhere is simple: “Take your clothes off and bend over. That’s it!”

But we’ve danced around the season’s chief controversy long enough, it seems. Andy turns to Teddi to discuss Puppygate: a tangled mess of lies, accusations, abandoned puppies and printed-out texts that gets so convoluted, those involved start sounding like Phoebe on Friends: “They don’t know that we know they know we know!” Teddi apologizes for even getting involved in the first place, and admits she did it because she was nursing a grudge against Dorit. When Andy calls out the self-billed “queen of accountability” for having “such a lapse,” she insists she’s being accountable now. Yeah, she’s accountable for not being accountable!

We run out of time, though, and the bulk of the Puppygate inquiry will have to wait for next week. Plus, the ladies will discuss plastic surgery and Erika’s ongoing feud with Kyle and Teddi — and Camille flies off the handle, calling Dorit “the most phoniest person I’ve ever met,” criticizing Denise for cursing in front of her kids and calling the whole reunion a “set-up” before storming off the set. Well, we can count on at least one storm-off every reunion, right?

Got thoughts on tonight’s RHOBH reunion? Drop ’em in a comment below.