How might Euphoria follow up on last week’s episode, which ended with violence (both real and threatened), cataclysmic disappointment and a sweet kiss that probably won’t end well?

With a little rollerskating, of course.

Other things happen in the episode, of course. Maddy’s injuries come to light, and no one is happy about them. Cassie and McKay make up. Kat wears a body harness — y’know, normal kid stuff.

Read on for the highlights of “03 Bonnie and Clyde.” 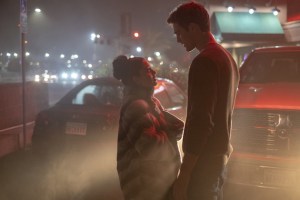 THE INEVITABLE FALLOUT | “Maddy knew who she was from a very early age,” Rue tells us at the start of the hour as we watch a little Maddy dancing and lip syncing to Madonna’s “Lucky Star.” Nate’s girlfriend was a pageant girl, and she was great at it, until a pageant official got arrested for child molestation (not of her) and her parents deemed her done. 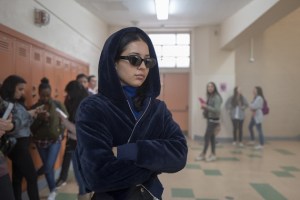 THE DAY YOU KNEW WOULD ARRIVE | Cal is at work when he gets a call and is summoned to the high school, where Nate’s mom and a cop are waiting for him. He’s sure they’re coming for him, so he excuses himself to vomit in the boys’ room before he knows exactly what’s going on. What’s actually happened: Maddy passes out in class after not eating all weekend, and when the paramedics show up, they realize that the turtleneck and hoodie she’s wearing are covering up bruises on her neck. When the school administration starts to investigate, the chili incident at the carnival comes to light. And pretty soon, the cops are there to talk to Nate.

When Maddy’s mother finds out what’s going on, she wants to press charges against Nate. For most parents, this would be terrible news. For Cal, it’s nothing but relief. Still, he talks to Nate alone and asks if the accusations are true. Nate lies and says no. 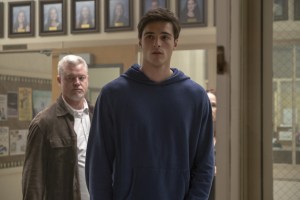 At the police station, Maddy is belligerent when the cops ask her to take off her sweater. So they restrain her and cut it off her, then swab the concealer off and photograph her rather extensive bruises. “Whoever did this to you doesn’t love you,” the sympathetic female detective chronicling the injury says.

In another interrogation room, while Cal watches, Nate plays the reticent, loving boyfriend role to the hilt, vowing his love for Maddy while dropping quiet accusations that she was on drugs the night of the attack and that she might’ve been with another guy the night of the carnival. Every time I think I can’t hate this kid more, he one-ups himself.

Later on Cal, excuse me, “DominantDaddy” has another rendezvous at the motel, but he really just wants to talk to his new friend. “Do you think this stuff affects them, even if they don’t know it?” he wonders. He goes on to muse about his sons’ anger — “not just anger, but rage, and it scares me because it’s too late” — but the tryst, of course, doesn’t have any answers.

Maddy spirals after the incident, screaming at her mom and sending Nate hundreds of texts he doesn’t answer. But when she gets a notification that he wants to meet her at the same motel his dad is just leaving, she runs over there as fast as humanly possible. Nate opens the door to his room, and she falls into his arms. 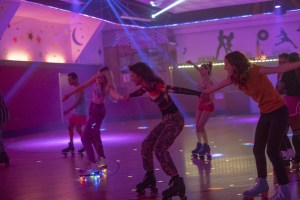 TOO MUCH, TOO SOON | “There is not a thing on planet Earth that compares to fentayl,” Rue tells us as she masturbates. “Except Jules.” But she’ll stick to just hanging out with the blonde for now, she tells us. Rue’s mom susses out that Jules slept over and that they’re in a relationship or something, but warns Rue that she’s “delicate” right now. Rue says they’ve talked and they’re going to take it slow (aside from getting “Rules” tattooed on the inside of their bottom lips).

Jules hasn’t told Rue what happened with “Tyler,” and she shuts down any conversation about Nate, Cal or their family. And when Rue casually floats the idea of blackmailing Cal so they could get money to do fun stuff, Jules announces that they’re never to talk about it again, and marches to the ladies’ room for a private freakout.

Later, Rue is quizzing Jules about how many one-night stands she’s had. This leads to a conversation about Rue’s limited experience, which she sums up as, “All I know is, life is not a Nicholas Sparks novel.” Ali’s got an even less rose-colored take on Rue’s new relationship: “Nothing in high school lasts forever.” At Narcotics Anonymous, Rue admits to the group that she’s been lying every time she collected a chip. “But I met someone, and she’s helped, and now I want to stay clean,” she says, noting that she hasn’t taken drugs in 13 days. When she’s done, they applaud.

Rue, Jules and Lexi go rollerskating. It’s all fun and disco lights until Lexi tells Jules that Rue’s positive trajectory is “all because of you, you know?” The sentiment is something Jules hears from her dad earlier in the episode, and she doesn’t like it either time.

At the end of the evening, Rue asks if she can stay at Jules’ place, and though Jules hesitates, she eventually agrees. The look of terror on Jules’ face as Rue snoozes in her arms later, though, makes it look like Ali’s prediction will come to fruition sooner rather than later.

IF A JOB’S WORTH DOING… | Ethan wonders why Kat is ignoring his texts and giving him attitude. He doesn’t know that after thinking he’d ditched her at the carnival, she had twin epiphanies: that guys are pathetic, and “There’s nothing more powerful than a fat girl who doesn’t give a f—k.” Decked out in a body halter and a choker, she picks up a guy at the mall, and even he is surprised by how quickly she wants to hook up. After their VERY short interlude in his car, he tells her she rocked his world, hard. And Kat struts out of that parking lot like she just got crowned homecoming queen.

TALES OUTTA SCHOOL | McKay apologizes to Cassie for denying their relationship at the carnival and promises he’s proud to be her boyfriend. And then she tells him about the penis photos on Nate’s phone, even though Maddy’s now denying she ever said anything about them and vowing to mess Cassie up if she spreads the rumor.

Now it’s your turn: What did you think of the episode? Sound off in the comments!