At long last, this week’s The Handmaid’s Tale gives us a serious chunk of Aunt Lydia’s backstory. Before watching the hour, I thought that learning more about the handmaids’ militant minder might make me feel some sympathy for the manner in which she’s chosen to survive Gilead.

But, nope: Instead, peering into Aunt Lydia’s past just cemented my belief that she’s a miserable person whose guiding light is to make those around her just as unhappy as she is. Fun!

Speaking of miserable, Ofmatthew finds herself shunned by the other handmaids in the wake of her role in Hannah’s martha’s hanging. And if that sounds rough… wait until the episode’s final moments.

Read on for the highlights of “Unfit.” 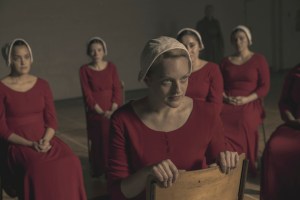 IN THE HOT SEAT | June’s sisters in red think it’s rather uncool that, as June points out, Hannah’s martha Frances “loved my daughter. Frances is dead. And Hannah is gone. Because of her.” The woman in question, of course, is Ofmatthew, for whom June has zero pity when Janine comments on how mean everyone is being to the ‘maid. “She got someone executed. She doesn’t feel sorry about it. She should have kept her f—king mouth shut,” June says matter-of-factly while they all attend the birth of a handmaid named Ofandy.

When Ofandy’s labor stalls, though, Aunt Lydia finds a way to fill the time. After taking an unrepentant June to task, the older woman puts June in the center of one of those shame-circles at the Red Center. You know — where the ladies all point at the person in the middle and chant “Her fault, her fault, her fault” or “sinner, sinner, sinner.” June is pretty impervious… until Lydia says that June’s role in Frances’ death deprived Hannah of yet another steady presence. “Think of that little girl without that warmth in her life. Whose fault is that?” Lydia needles June, who tries not to cry as she answers, “My fault.”

But our girl rallies. “I have something else to testify,” she pipes up, putting on a very pious face. “Ofmatthew doesn’t want her baby.” Gilead gasp! The best lies contain a kernel of truth, and you remember how Ofmatthew was talking about how this time around was tough a while back? She freaks, denying what June is saying but copping to having that feeling for “just a second” — and that’s enough for Aunt Lydia to put her in the center of the circle. In the hotseat, Ofmatthew admits that she suspects the baby she’s carrying is female, and she got scared about “what her life would be.” She’s clearly not doing well mentally, but that doesn’t stop Lydia from having the women call her “sinner” and “crybaby” while she quietly deconstructs before their eyes.

THE LIFE OF LYDIA | While Ofmatthew is losing what’s left of her emotional equilibrium, why don’t we go back in time to pre-Gilead Lydia? Her last name is Clements and she was a fourth-grade teacher with long hair and dangly earrings. We see her waiting with a student, Ryan, whose mom is late to pick him up. Lydia is prone to quoting Scripture, but not in the weaponized way she does in the present-day. And when Ryan’s young mom Noelle shows up late, frazzled and with no plans for dinner outside of the closest drive-thru, Lydia surely judges her… but she also invites Ryan and his mom over for chili.

After the meal, we learn that Noelle works at a bar and is sweet but unrefined in a way that slightly irks Lydia. For instance, when she mentions that Ryan “deserves more, better. But all he has is me,” Lydia says, “You could be better.” (Somehow, when Ann Dowd says it, that sentence doesn’t seem quite as judgmental as it reads.)

Noelle and Ryan grow closer to Lydia; as they spend Christmas together, Ryan calls her “Aunt Lydia” and Noelle gives her makeup from the (apparently more respectable than a bar) shop where she now works. Lydia blushes and says they shouldn’t have, but you can tell she’s secretly pleased. As Noelle applies Lydia’s gift, she tells the older woman — whom we know was married to “a mistake” in the past — that she’s got to try harder to put herself out there on the dating scene. 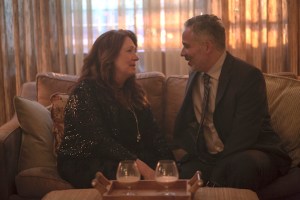 CRAPPY NEW YEAR | So she does. She puts on a sparkly top and goes out on a New Year’s Eve date with her principal, a widower who’s also apt to quote the Bible in casual conversation. He seems like a nice guy, and their evening grows more affectionate as it goes on. They even sing “Islands in the Stream” at karaoke before midnight and enjoy a slow dance as the ball drops; at the pivotal moment, however, he kisses her on the cheek.

When they return to her place for a nightcap, however, Lydia and the principal start making out on her couch. And it’s all going well until he pulls away, saying it’s too soon after his wife’s death for him to feel comfortable with someone new. He wants to see her again, but she replies, “Yes, I’ll see you at school,” and that’s it. After he leaves, she cries in the bathroom (understandable) and then bangs on the vanity mirror until it breaks into jagged shards (um, troubling). 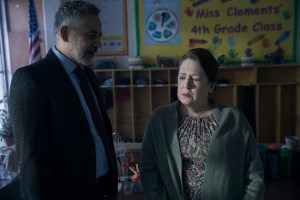 The next time we see Lydia, she’s at school with her hair tightly bound up and a severe look on her face. She’s asked for an emergency removal of Ryan, claiming that his mother is unfit. “The child is vulnerable to a corrupting influence,” she says, sounding a lot more like the Lydia we know as she cites their law-bound duty to report moral weakness. (Oh hello, rise of Gilead. I’d wondered when you were going to show up!) For what it’s worth, the principal seems to think this is overkill.

Ryan gets placed in a foster home, which leads a furious Noelle to confront his teacher. “You’re a f–king coldhearted bitch,” she screams at Lydia, who merely replies, “I forgive you.”

CLEAN-UP IN AISLE 1 | Back in present-day Gilead, Lawrence gruffly tells June he doesn’t know anything about where the Mackenzies or Hannah are now, and “Don’t ask me again.” That night, Ofandy’s labor begins again, but the child is stillborn. Ofandy’s mistress cries and freaks out, sobbing. Meanwhile, I damn near start crying at the visual of all of Ofandy’s fellow handmaids circling her birthing chair with purpose and sympathy to embrace her in the wake of her daughter’s death. June later realizes that she was relieved to see that the little girl died.

At home, Commander Lawrence seems to have had a change of mind overnight. He asks her to spend time with his wife, because “you’re good for her.” June has zero time for his soft words. “You do realize that this world that you built here is destroying her. And with one phone call, you could have her out,” she reminds him. “But you’re keeping her hostage. You’re not protecting her. You’re killing her.” He merely looks at her levelly and says, “I bet that felt good.” 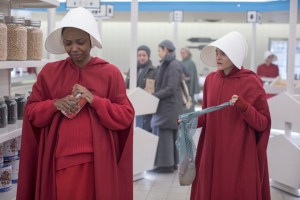 The next day at Loaves and Fishes, Aunt Lydia asks June for a private word: She wants to get June out of the Lawrence household. June, meanwhile, notices that Ofmatthew is watching them with terror and realizes that the handmaid thinks they’re talking about her. So June plays into it, dropping her voice and looking as conspiratorial as possible… and that’s when Ofmatthew snaps. She starts beating on poor Janine, who was just trying to calm her down, then busts a jar into the face of the Guardian who tries to subdue her. Glass goes into the man’s neck, which is NOT good, but things get even worse when she grabs his gun and points it at June.

June doesn’t even flinch — she even nods slightly — and that’s when a crazed Ofmatthew turns the weapon on Aunt Lydia. Another Guardian takes the handmaid down before she can fire, then the Guardians drag Ofmatthew out unceremoniously, her blood streaking on the white linoleum. June just watches.