H. Ross Perot, the highly quotable Texas businessman who ran for president in the 1990s as a third-party candidate, died Tuesday at his home in Dallas, the Associated Press reports. He was 89.

Perot parlayed his huge success as the owner of Electronic Data Systems Corp., which helped companies manage their tech networks, into a serious campaign in the 1992 United States presidential election. The billionaire spent $63.5 million of his own money to win 19 percent of the vote against President George H. W. Bush and Bill Clinton, which was the best outcome by an independent candidate since Theodore Roosevelt’s in 1912. 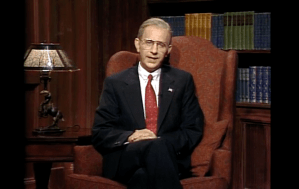 Perot’s exuberance, confidence and Texas accent — as well as his reliance on charts and his repeated use of the phrase “It’s just that simple” — made him perfect fodder for comedians to lampoon. Dana Carvey’s take on Perot was in heavy rotation on Saturday Night Live in 1992 and returned to NBC’s late-night sketch show at least four more times throughout the ’90s.

Carvey later trotted out his Perot impression on his eponymous ABC series:

Perot attempted another presidential run in 1996, but was deemed to have insufficient support to participate in official debates and only garnered 8 percent of the vote.

After his political career ended, Perot started another company, Perot Systems Corp.; he retired in 2000, and Dell Inc. later bought the business. Throughout his lifetime, Perot championed the cause of American military service members and prisoners of war.