Even though Monday’s episode of The Hills: New Beginnings was mostly just footage of women greeting each other at boutiques, MTV also gave us exactly what we came for: thinly veiled advertisements for Spencer Pratt’s totally legitimate crystal company.

Pratt Daddy Crystals — a real thing with a real website — was first mentioned during a gathering at Pamela Anderson’s house, or as The Hills blasphemously refers to it, “Brandon’s mom’s house.” Though he spent most of his time duping bikini-clad strangers into posting pictures of his crystals on Instagram, Spencer also tried to push his product on his “friends,” including Brody Jenner. You see, Spencer’s extremely concerned by the fact that Brody no longer enjoys getting wasted in the middle of the day. “This is not the Brody I grew up with,” Spencer said, thus completing his transformation into an actual cartoon devil.

The drama continued at Justin Bobby’s sparsely attended “a-cue-stic” concert, where Spencer and Brody finally confronted their lifeless shell of a friendship. In addition to feeling like Brody isn’t being his “real” self now that he’s married, Spencer’s still upset that his former BFF never made an effort to meet his son. (Unless, of course, Gunner’s “assistant” forgot to invite Brody to his first birthday party!) Either way, this feud isn’t likely to end soon. As Spencer so poetically explained, “It’s very Game of Thrones-ish.”

* At this point, I don’t even feel like discussing the Audrina-Stephanie-Justin Bobby triangle. None of them seem to have a clue what they want, so let’s just sit back while they tire themselves out.

* That said, I could listen to Justin Bobby discuss the various sub-categories of humans all day long: “I’m a man’s man. I like to see a woman’s woman. There’s boy’s boys, there’s girl’s girls, there’s young adults, then there’s adolescents, and then there’s guys and girls, and then there’s men and women.” (If you thought you lost brain cells reading that “sentence,” just imagine how many I lost by transcribing it.) 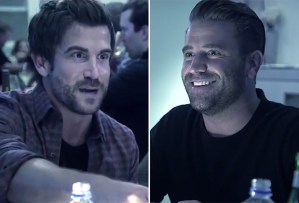 * Audrina apparently went on a blind date with Jason’s friend Matt — and you’d have to be blind not to notice the disturbing resemblance between the two. What’s really going on here?

* Heidi’s friends think she and Spencer have the most “solid” relationship of everyone in their group. Little do they know, Spencer and Heidi actually had their souls tethered together by a swamp witch somewhere around the turn of the century. Their futures are no longer theirs to choose.

* If you take Spencer’s story about starting his company out of context, it totally sounds like he’s talking about meth: “I was blowing all of my money on crystals, so I started selling crystals… so I could buy more crystals.”

Your thoughts on Episode 3 of this modern day Greek tragedy? Drop ’em in a comment below.