Chloe Bennet did tell us there would be swords this season on Agents of S.H.I.E.L.D. And this Friday, a “magical” (?) sabre finally showed up, but in whose hand and for what purpose?

Having saved S.H.I.E.L.D. HQ from last week’s shrike event, Sarge had Mack over a bit of a barrel. Mack came through on half of the deal, by flipping Sarge the keys to his truck. Sarge, though, can only take one of his crew on the mission to prevent the end of Earth at the hand of the shrikes’ “creator,” while also being accompanied by both May and Daisy. Sarge chooses Snow, then warns Mack to not get in their way. Mack agrees not to leave the base… without pointing out that the Zephyr is their airborne base.

During the drive to Nebraska, they watch on radar as a crowd of random, shrike-infested people congregate in the middle of nowhere and explosively transform into a network of those crystalline things, coming together as a tower of sorts. Sarge warns the others that, “She is coming, and everyone you care about is going to die.” But if Sarge can get close enough to the creator, he has… a sword that he plans to drive through her heart. Also, Snow (creepily) reveals herself to be a bit sweet on Deke, who wound up going along for this ride when his tech savvy was needed to fix Sarge’s “shrike repellant.” Deke in turn appreciates Snow’s want to see his soul be… spilled out. 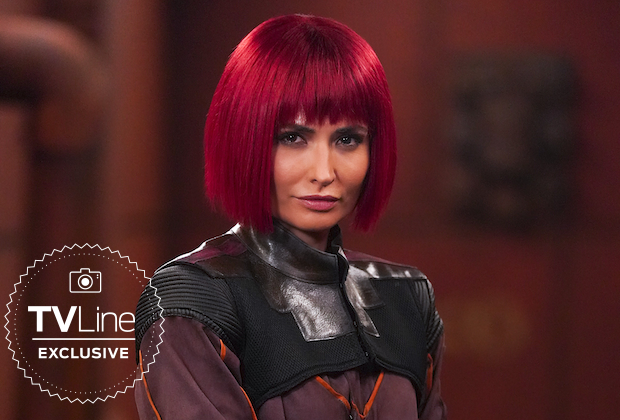 Meanwhile in space: The crew of the ship that Fitz and Jemma helped Izel appropriate has their misgivings about the bucket of bolts surviving a jump, but Fitz is OK with the 50/50 odds. It all turns out to be much ado about nothing, as the ship makes the jump without incident, after which Jemma and Fitz see their home emerge from behind the moon. Izel explains to her new terran friends that she has been searching for artifacts that belonged to her home world. Most recently, she thought they were on Chronica, but that was not the case. That world in turn wound up “destroyed,” though she cops to no culpability. Instead she suggests that she is being chased by her own ruthless nemesis, whom we are left to believe is Sarge. Why is this person dogging her so? “Because I know the truth about him,” Izel says. “I know what he really is.”

Afterward, in private, FitzSimmons concur that the artifacts Izel seeks are the Kree monoliths — which, Jemma explains to Fitz, have all been destroyed. That update  leads into a pretty hilarious conversation about the wedding Fitz missed, how he is jealous of her first husband, and the wedding night prowess of his own that he must live up to/surpass.

As for Izel, what/who is she, really? Because while FitzSimmons unsuccessfully try to get comms working to contact their friends on Earth, we see Izel “mother” a wee shrike, with which she later infests crew member Toad. Toad and his similarly possessed buddy then join Izel and her zombie-like army in the halls, as the ship begins its descent, with FitzSimmons thus far none the wiser.

Back on Earth, Benson relays research suggesting that the creator Sarge has spoken of is a demon named Izel, and that the artifacts she is after are the Kree monoliths. Pax and Jaco, meanwhile, have been detained via chains and the containment pod, respectively. After Pax comes up short with an escape attempt (that nonetheless kills a S.H.I.E.L.D. red shirt), he blabs that Sarge’s plan involves a bomb. That information is quickly relayed to Daisy and May, who confront Sarge. Thing is, he has already armed the bomb and set the truck on auto pilot. And any quaking from Daisy, to stop him, might set it off prematurely. Sarge escapes to the truck roof, where he creates one of those interdimensional portals and uses it to step onto the Zephyr, right where Pax and Jaco are being held. Daisy, May, Deke and Snow, meanwhile, are left behind, quite trapped inside the truck and barreling toward the shrike tower. All while Izel and her ship begin their approach for a landing.

Will Mack shoot down the alien ship, not knowing FitzSimmons are aboard? Will he take out Sarge’s truck before the bomb with a 200-mile blast radius goes off, sacrificing May, Daisy and Deke in the name of a greater good? Will Deke be able to disable the bomb of Sarge’s he just uncovered?