Upon being escorted onto the Culver City soundstage that Marvel’s Agents of S.H.I.E.L.D. calls home, I… am pretty sure I’m in the wrong place? Because the first set I walk past is just so odd and incongruous with anything we’ve seen thus far on the ABC series. And yet I am assured it does eventually play a key role in Season 6, which kicks off this Friday at 8/7c.

Of course, “odd and incongruous” are practically hallmarks of S.H.I.E.L.D., which has introduced new elements on the regular. Season 1 span its wheels a bit before compellingly incorporating the fallout of Captain America: Winter Soldier and its S.H.I.E.L.D.-less society. Season 2 then went all-in on HYDRA and Inhumans, while the show’s third year evoked the Kree after catapulting Simmons to a far-off planet. Season 4 tackled Ghost Rider, LMDs and a virtual world called “The Framework,” while the most recent cycle featured time travel to a dystopian future.

Where is left for Season 6 to possibly go…? 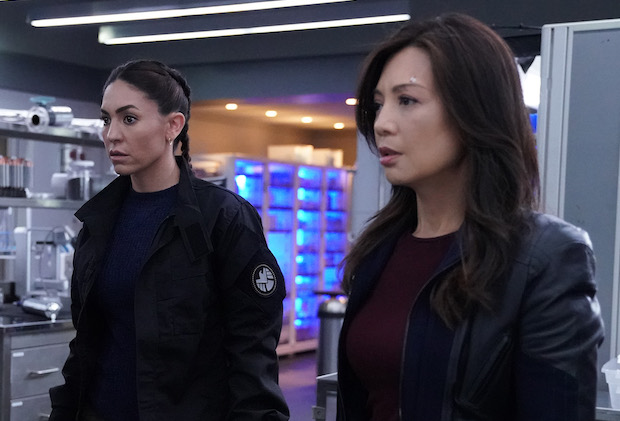 Picking up one year after a terminal Coulson got dropped off in the actual Tahiti to live out his final days with May at his side, Season 6 finds S.H.I.E.L.D.’s familiar faces purposely split into two groups. On the ground (aka Earth), Mack, as Director, is leading a mission to “figure out these anomalies that keep popping up” across the country, reports Ming-Na Wen, who plays May. “There are these surges of energy that appear and disappear, so we’re chasing them down to figure out what they are.”

Daisy and Jemma, meanwhile, have been on space odyssey, (somewhat) patiently searching for the ship on which a cryogencially frozen Fitz is biding his time until he arrives in the future of Season 5. “Jemma is determined. She’s in full finding-Fitz mode,” avows Elizabeth Henstridge. “A version of him is [out there], and while there are no guarantees on finding him, she’s convinced she can do it.” (Perhaps hinting at the ladies’ eventual success, Iain de Caestecker was on set during our visit, where he chimed in that “Jemma is steadfast in her beliefs.”)

Falling into neither of the above groups is FitzSimmons’ adult grandson, Deke, who has spent the past year outside of the Lighthouse and “exploring the world,” says portrayer Jeff Ward. “I think he wanted to figure out what this world is all about, because obviously he was born into a very different one,” hailing from that dank future as he does. 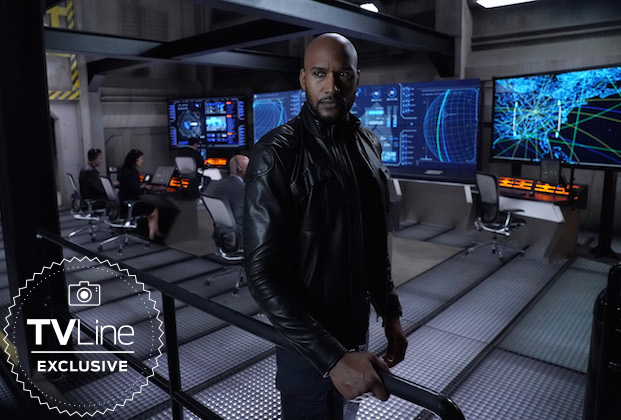 Doing his best to manage the ground and space objectives is Mack, who in the Season 5 finale was tapped by Coulson to lead the team. “Personally, I love the challenge of being the director,” Simmons previously told TVLine. “Mack has worked side-by-side with the people he now leads, and that works to his advantage — he’s one of them.”

Knowing May, Yo-Yo et all that closely, however, runs the risk of compromising Mack’s decisions. “The one thing that can hinder his ability to lead is his reluctance to put the people he loves in the line of danger,” Simmons allowed. “As a result, this may lead to Mack’s toughest decision as director: What sacrifices will be made?”

Such dilemmas indeed prove to be “tough on Mack psychologically, and it wears him down,” says Wen. Luckily, May is there to “advise Mack and guide him, because she’s been in that position with Coulson.”

One of Mack and May’s first orders of business in the new season is to boost the ground team’s brainpower in the absence of the collective FitzSimmons. “With one in outer space and one still lost, May’s other job is to try to recruit someone who can replace them,” says Wen. Enter Bosch‘s Barry Shabaka Henley as Dr. Marcus Benson, a brilliant Natural Sciences professor recruited to offer his expertise to the S.H.I.E.L.D. team., while also new to the mix are a “galactic mercenary” and “an assassin from a distant planet.”

Of course, the bigger, actual loss the team continues to cope with is that of Coulson, whose absence still looms large a year later. “There’s a line in the premiere where May says that they had ‘more time than they could hope for'” together in Tahiti, Wen shares. But with the time jump came some needed healing.

Even while venturing dangerously deeper into space, Daisy, for one, “has a bit more of a peace to her,” having properly mourned her mentor and father figure, Chloe Bennet shares. “She has been through it all and is genuinely stronger from it, and she is not dealing with things the way she has in the past — by running or pulling way from people. She has fully accepted her trauma and is moving forward in the most healthy way, for the first time.”

Wen similarly enthuses, “What’s so great about what the writers did is it gave us a year to breathe and kind of reshape our lives. We’ve been able to focus on rebuilding S.H.I.E.L.D. and kind of carry on Coulson’s legacy.” As a result, when we first see May in Season 6, Wen says she is “lighter and more purposeful, and hopeful.” 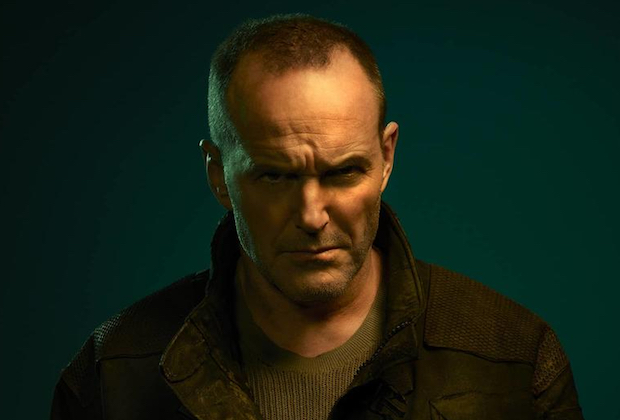 That lighter vibe will surely be put to the test, though, when a malevolent figure known as Sarge eventually barges onto S.H.I.E.L.D.’s radar, wearing the face of original cast member Clark Gregg.

How can that be? Who or what is the familiar stranger? Gregg has said that Agents of S.H.I.E.L.D. fans “might be a little disturbed” to see “this other, very mysterious person, who is not Phil Coulson” wreak such havoc on our heroes.

And no matter what your theory on Sarge may be, that “odd and incongruous” set we mentioned earlier wouldn’t seem to sync up with any speculation.

“This season has an element of fantasy that I don’t think we’ve ever had before…,” Bennet teased. “Everything is a little bit more fragrant, and in a different tone than we’ve had. I mean, there are swords, and… I don’t want to say anything else!”

Want more scoop on S.H.I.E.L.D, or for any other show? Email InsideLine@tvline.com and your question may be answered via Matt’s Inside Line.