Oh, how we hated June’s piously smug walking partner, Ofmatthew. And then we felt bad for her because she was pregnant again. Welp, as this week’s The Handmaid’s Tale proves, we should’ve stuck to our initial impression.

At the insistence of Aunt Lydia, the mother-to-be does something truly awful, and her actions not only lead to an innocent woman’s death but also push Hannah just out of June’s reach once again.

Meanwhile, down in D.C., the Waterfords tango. Yeah, I kept waiting for it to turn into a bizarre dream sequence, too. But here we are.

Read on for the highlights of “Under His Eye.”

HANG IT ALL | Three lines of handmaids get in formation alongside some red rope and, on Aunt Lydia’s command, pull until the floor of a gallows is reset. (Side note: Seriously, RED rope? Gilead has gotta make even the rope symbolic? How much time and effort did it take to make that rope that color? Wouldn’t a normal brown rope have served the purpose just as well? If you haven’t picked up on it, this small detail is making me insane.) Lydia harangues her charges about being strong and faithful, then blows a whistle and they pull again so the floor drops out from underneath two men and a woman. The hanged parties die. The handmaids quickly disperse.

Ofmatthew is back to being her holier-than-thou self, though she’s brought up short by a bout of morning sickness. June rolls her eyes but helps the woman breathe through it. However, when she tries to sympathize, she’s met with Ofmatthew’s strident statement that “My child is a blessing!,” and their moment of kinship is over.

At Loaves and Fishes , June and a few of her fellow ‘maids notice that another handmaid is wearing the face veil like the D.C. handmaids do, and Alma says she’s seen others in their area do the same. “We should salute their devotion,” Ofmatthew sniffs. “Right. You do that,” June says. When Alma gets June alone, she directs her to Hannah’s martha, who also happens to be in the store. The martha reports that “Agnes” is doing well and that June should leave her and her family alone. June counters that there’s no such thing as doing really well in Gilead while female, and notes that the hangings are on the rise.

June says that Commander Lawrence could get them all out, and though the martha seems timid, she relents: There’s a resistance-friendly Guardian working the entrance to Hannah’s school that day, she says, and he’ll allow June to see her daughter. A short distance away, unbeknownst to June or the Martha, Ofmatthew clocks the entire exchange.

EMILY AND MOIRA BOND, KINDA | In Canada, the Swiss intermediary woman who met with the Waterfords and June in Washington, D.C., is sitting down with Emily. Sylvia also is there. As the sympathetic Swiss woman gingerly asks about the acts that led to Gilead considering Emily a “criminal” — stealing the vehicle and running over the guard, stabbing Lydia in the back on the night of her escape — Sylvia is incensed that her wife is having to answer for actions she felt were necessary for her survival. Later, she tells Emily, “You know I don’t care what you did there, right? You don’t have to deal with this on your own.” But Emily, who’s just as shell-shocked as she has been since arriving in Toronto, claims she’s fine.

At a café later on, Moira tries to tease Emily into talking about their old haunts, name-checking some of Boston’s gay bars like Club Café and Machine, but Emily quietly tells her that she studied a lot and didn’t have much of a social life. Undeterred, Moira unsuccessfully strives to find some common friends. “How do we not have any gay in common?” she marvels. “I’m pretty sure this is the first time this has happened in all lesbian history.” Then, when Moira gets a message that there’s going to be an in-your-face protest of some Canadian minister involved in Nichole’s case, Emily meekly asks, “Can I come?”

And that’s how both women wind up behind bars after getting physical with the ministers’ security staff. That’s where Em confesses about feeling no remorse about killing a commander’s wife in The Colonies. Moira understands. “I killed a commander,” she says. “I didn’t have to. He was asleep, but I did it anyway.” But then Moira points out how they haven’t killed anyone since they escaped, “So I think we’re good,” she says, smiling. 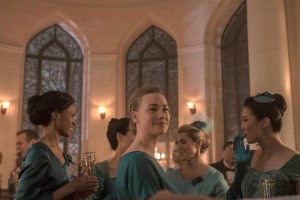 D.C. GOINGS-ON | In the nation’s capital, Olivia Winslow shows Serena around a gorgeous “unrestored” house that she hopes the Waterfords will consider for their potential relocation. “Unrestored” here, by the way, means “not yet cleared of the detritus left behind by a family ripped from its home by a totalitarian regime.” There are shoes in the entryway, a Washington Post on the table and broken glass everywhere — signs of struggle, or an unrelenting search, or both. A photo of the previous owners show they were a family with three young children; the baby’s name was Phoebe, we learn from the wall of the nursery upstairs. As Olivia is prattling on about the structure’s high points, Serena is subdued. I’d liked to think she’s feeling bad about the poor people who used to live here and the obvious signs of their turmoil and possible deaths, but let’s be honest: She’s probably just mooning over how she may never see Nichole again. God, she’s really the worst.

Elsewhere, George Winslow catches up to Fred at the Parliament of Men With Lots of Important Walking-Around To Do and suggests that Fred not try so hard to get Nichole back. “So much leverage comes from the child,” he says. “With her back home…” Fred picks up exactly what his superior is putting down, and how could he not? Winslow gets all close and breathy as he whispers how “in the end, Gilead will know whom to credit.” Oh that wasn’t weird AT ALL.

Later that evening, when he meets Serena at some high mucky-muck dinner and dance, Fred promises his wife that he’s going to bring their daughter home. She’s relieved, because — and I can’t remind us all of this enough — she’s far smarter than he is and had already arrived at the conclusion that having Nichole trapped in Canada is more “politically expedient” than reuniting her with them. He says he doesn’t have a timeline yet, “so please don’t push me for one,” and she is genuinely grateful. How grateful, you ask? She looks like she’s enjoying it when they twirl around the ballroom in a tango. Everyone applauds at the end. Hold up: How is sexy, sexy TANGO state-approved but WORD-BASED LABELS ON FOOD aren’t?

ABORT MISSION! | Back to June: Now that she knows where Hannah will be, and that she can probably get access to her, she just needs a way to get there by 3 pm. So she sweetly and efficiently bullies Eleanor Lawrence into going for a walk. All is going well until they run into Naomi Putnam and Angela — “Hi, button. We thought you were gonna die, but you didn’t!” Mrs. Lawrence coos to the child not once but twice (ha!) — and June hustles her mistress out of there before she can derail the whole plan.

As they continue, Mrs. Lawrence talks about how she always wanted kids but her husband didn’t, and how maybe it was best given that she has bipolar disorder. June starts to feel bad, so she comes clean: “My daughter’s school is in Brookline. Today may be my only chance to see her.” She apologizes and offers to take Eleanor home, but Mrs. Lawrence has a new vivaciousness about her. “I think I’m keen on an adventure,” she says, and they keep going.

I’ve got to give Eleanor credit: She improvises nicely when they arrive at Hannah’s school and realize that the friendly Guardian isn’t there that day. She talks her way into a tour of the facility, but June is made to wait outside. She runs around the building — which has armed Guardians everywhere, by the way — until she’s on the other side of the wall separating the outside play area from the rest of the grounds. June thinks she can hear Hannah cavorting with her friends (maybe she can?) but it’s all for naught when a Guardian pulls her back to deal with her distraught mistress.

Apparently, Mrs. Lawrence got agitated when she wasn’t shown the children, and she won’t calm down or stop crying. June promises to get her confused mistress home, and they leave. Back at the house, the commander gets his wife settled but says nothing to June. She apologizes, but then changes her tone to something harsher: “You should have seen her out there. She came alive,” she tells him. “You should have seen her.”

I WAS WRONG: OFMATTHEW IS THE WORST | At the next hanging, Alma whispers to June that Hannah and her family are gone, and no one knows why. Just then, Lydia announces that one of the people facing lethal punishment that day was a martha who endangered “the child she was trusted to protect!” The woman in question is Hannah’s martha, who’s sobbing as she’s brought up on the gallows. June looks like she got punched in the stomach, and she refuses to pick up the rope when commanded. Of course, Lydia makes her, calling it her “sacred duty.” When the older woman blows her terrible whistle, June whispers “By His Hand” and helps to yank the floor out from under the martha and her fellow “criminals,” who are killed. June lingers a moment after the other handmaids leave, but then she does, too.

When June catches up to the group, Ofmatthew just can’t keep her stupid mouth shut. “You should be thankful. Your temptation’s been lifted,” she tells her walking partner, who demands to know what the expectant mother did. Apparently, she was spying on June for Aunt Lydia. “I saved you!” she cries, which prompts June to take off her wings — and that’s how you know it’s gonna go DOWN. “Do you have any idea what you did?!” June screams, grabbing Ofmatthew by the neck and pushing her up against a wall while the rest of the ‘maids form a red wall of secrecy around them. Eventually, some of the women pull June off Ofmatthew, who’s gasping and gaping. Then June walks off, raging.

Now it’s your turn. What did you think of the episode? Sound off in the comment!