The Handmaid’s Tale‘s June really got her bell rung — or should we say “ringed?” — in last week’s episode when she realized how Washington, D.C.’s commanders make sure their handmaids are seen, not heard.

But the realization that her counterparts in the nation’s capital have it even worse than she does was just one of the big revelations dropped during the hour. By the end of “Household,” we had a bunch of Gilead-related queries. Where do Rita’s real allegiances lie these days? Nick can’t really be a bad guy, can he? And, um, what was up with that billiards scene between Fred and Christopher Meloni’s Commander Winslow?

Luckily, executive producers Bruce Miller and Warren Littlefield and series star Amanda Brugel were available to educate us. Read on for our most burning questions coming out of Episode 6, starting with… 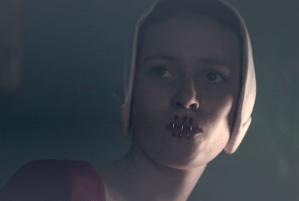 HOW DO D.C.’S HANDMAIDS EAT? | “It can be taken off,” Littlefield tells TVLine about the metal rings appliance that Washington’s handmaids are forced to wear through their mouths. “We wanted it to be different from the world that we had presented for the first two seasons,” he adds, “and I think that worked very well.”

IS COMMANDER WINSLOW GAY? | “He might be. There’s this fraternity and connection that he has with Fred,” Littlefield says. “We later see his sexuality toward a woman… We talked a lot about how much we lean into that. It’s absolutely within him, which is also the fascination of what’s going on. This is a choice he made, but what’s sitll inside him, what are those urges, and what comes out? We thought that was another layer to play, particularly in Chris [Meloni], who’s so masculine that it’s pretty fascinating.”

IS RITA STILL PART OF THE MARTHAS’ UNDERGROUND NETWORK? | When June and the martha were reunited in D.C., Rita made it clear that she felt sympathy for Serena’s plight. Those feelings also have caused her to pull back from her revolutionary side work, Brugel says. “She feels a tremendous amount of guilt for helping the baby get out. Rita lost a child,” the actress reminds us. “The interaction with the marthas’ network, she backs off from it and then pours all of her efforts into taking care of Serena. There’s a lovely bond there that forms that’s completely unexpected.” 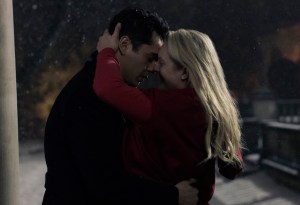 IS NICK PLAYING SOME TWISTED GAME WITH JUNE? | Given what we learned about the newly minted Commander Blaine — that he was a true believer who played an integral part in the crusade that brought Gilead into being — we demanded to know whether June’s seemingly loving babydaddy has been toying with her all along. “I don’t believe in the long con because I’ve never seen it in real life,” Miller says. “Nick is not ‘working’ on June. I think after all the time they’ve been together, you would think June is a boob if she didn’t recognize that.” The EP adds that Nick may be hiding something from June, but not because he’s waiting to unleash a nefarious plan at some point. The answer to why he’s hidden his past is far simpler: “He’s ashamed,” Miller says. “He feels like if she knows the truth about him, she won’t look at him the same way anymore.”