“Dear you: If you are reading these words but don’t remember writing them, then I’m afraid I failed. You have survived several immediate threats, but you are in danger.”

So begins a highly unsettling note Myfanwy Thomas (played by Emma Greenwell, Shameless) finds in her pocket at the start of The Rook, Showtime’s adaptation of Daniel O’Malley’s supernatural-spy novel. Even more unnerving: Myfanwy has just woken up alongside London’s Millennium Bridge, in the rain, among several dead bodies wearing latex gloves.

Myfanwy’s frantic and frazzled efforts to figure out just what the frilly heck is going on make up much of the drama’s first hour. After getting a room at a shady motel, Myfanwy examines her copious bruises and gets a few hours’ sleep. She also continues to read messages that her pre-memory-loss self left. That’s how she learned that she got information from “a reliable source” that she’d be attacked, “though I don’t know by whom. I know I’m going to survive, though I don’t know how, and I know that my memory is going to be erased forever.”

Along with the letters, Old Myfanwy offers New Myfanwy a choice: a path to escape her old life, or a way to reassume it. Oh, and in case you were wondering, “Myfanwy” rhymes with “Tiffany.”

She makes her way to a bank to access a safe-deposit box, but she’s attacked upon entering the building. Then, seemingly without knowing how she does it, Myfanwy generates some type of power from within her that kills one attacker and seriously wounds the other. Freaked out, she retrieves the contents of the box — which include a gun — and follow directions to her apartment. 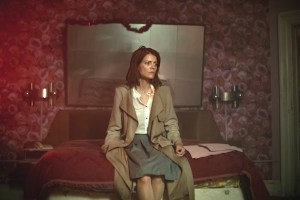 There she finds all the evidence of her old life, including a medicine cabinet full of prescription drugs and a fairly monochromatic wardrobe. A video message from Old Myfanwy leads New Myfanwy to a secret room in the flat, and that’s where we learn that she’s a high ranking member of a secret governmental agency called the Checquy. “We’re a secret wing of British intelligence that recruit people with certain abilities,” Old Myfanwy informs her. “You are one of these people, with the potential to be a deadly weapon.” (Those bodies by the bridge are starting to make more sense, no?)

All of the Checquy’s senior agents have codenames related to chess; Myfanwy is a rook (hence the name of the show) who’s not an agent in the field but rather someone who supports the agency’s work. Rook Gestalt is four agents with one consciousness (“Remember: Speak to one, you’ve spoken to all,” Old Myfanwy warns). Linda Farrier (Joely Richardson, Nip/Tuck), the king, is Myfanwy’s boss and mentor; Conrad Grantchester, the queen, is second-in-command. He also has the power to alter the atmosphere and is “dangerous.”

Farrier eventually shows up at the apartment and realizes that Myfanwy’s memory has been wiped. She knows about the incidents at the bridge and the bank. She tries to get Myfanwy to come into the office, but the younger woman is understandably wary and refuses. Linda also urges Myfanwy to take a pill to calm herself, but when Linda leaves, Myfanwy spits it out. 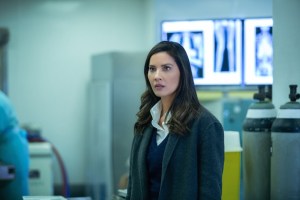 Meanwhile, an American agent named Monica (Olivia Munn, The Newsroom) accompanies Grantchester to the morgue to identify a male agent who’s gone missing. When she does, it seems like maybe she and the dead agent were more than co-workers. (Also of note: It seems like perhaps Monica has a supernatural power or two, herself.)

Eventually, Myfanwy decides to go to work. And though she has nearly no idea what’s going on or to whom she’s speaking — or even where her office is located — no one but Linda seems to notice that something is spectacularly wrong. The most unnerving moment is when Myfanwy gets pulled into a private corner with one-quarter of Rook Gestalt and realizes that she had a drunken hook-up with him (them?) that “can’t happen again,” Robert Gestalt (Ronan Raftery, The Terror) tells her. She also briefly meets Monica, who is miffed she’s been placed with the support directorate instead of out in the field with Gestalt.

In her desk, Myfanwy finds another note from her former self: “The person who hurt you, betrayed you, is right here. They know what they did, but I don’t know who they are. My best advice to you? Don’t trust anyone.”