Kat gets a thorough introduction to cryptocurrency, humiliation kink and embracing her sexuality in this week’s Euphoria. And in the beaten-down teen psyche landscape that is this show, that’s a major win… even if she has to come face-to-fly-area with a micropeen in order to make it happen.

Rue, though. This kid makes me ache. She is FICTIONAL, and yet I am SO WORRIED for her. But maybe, just maybe, she learns how to latch onto an ally at the end of this week’s episode? (Upspeak entirely intentional; I have no idea whether this glimmer of 12-step hope is going to last longer than it takes those pancakes to cook.)

Read on for the highlights of “Made You Look.”

AN ARCHIVE OF HER OWN | The summer Kat was 11, Rue’s voiceover tells us, her family went to Jamaica. We watch a flashback to that trip, during which Kat got stung by a jellyfish and learned she loved virgin piña coladas. In fact, she drank 72 of them over the course of that week. “She was in heaven,” Rue says. “And then she got home.” Poor Kat realized she’d gained 20 lbs. from all that creamy, coconutty goodness. And that led her boyfriend Daniel, who’d heretofore seemed like the dreamiest thing on Earth, to break up with her during fourth period of the first day of school.

A very sad Kat turned to fictional romances for comfort, finding solace in watching Luke and Lorelai on Gilmore Girls, Bill and Sookie on True Blood and Fitz and Olivia on Scandal. “That’s real love, and those were real men,” Rue says. All of the TV-viewing led Kate to start writing fan fiction in the summer before high school, and she soon became one of the most prolific — and smuttiest — authors on Tumblr. To wit: We watch an animated recreation of her NC-17-rated story about One Direction’s Harry Styles and Louis Tomlinson, and it’s hilarious. 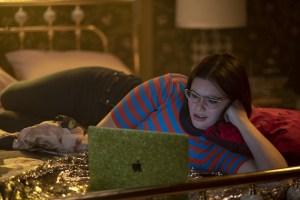 That story earned Kat a huge online following, which bore no resemblance to her real life as a lonely high school student. She dreamed about telling her followers to storm the school; in a fantasy sequence, we watch that play out as her minions, dressed like extras from Vikings, create carnage in the cafeteria. But when one hunky follower realizes that Kat (also attired in khaleesi chic) doesn’t match up to the image he had of her online, he calls her an imposter and attacks.

Kat had always thought that people online wouldn’t like her if they knew what she really looked like, Rue tells us… until the sex tape hit the Internet. And in the present-day, Kat dons black lingerie and a cat mask and dances for her live cam like everyone’s watching.

A CLEAN START | Throughout the episode, we see Rue speaking at the Narcotics Anonymous meeting where she gets her 60-days-sober chip. But the thing is, she admits via voiceover, she’s only really been clean for two weeks, since the night of the Fentanyl disaster. We flash back to that evening, as Rue is coming down from the drug in Jules’ bed and Jules is begging her to stop using drugs, because “I’m not trying to become best friends” with someone who’s suicidal, the blonde tells her. “I don’t want to be around you if you don’t stop using drugs.” So Rue tearfully agrees, and after asking Jules to pee in a pill bottle for her, she goes home.

Rue’s mom is understandably mad and worried when her daughter rolls in at 5:30 in the morning after being MIA via text and phone all night. But Rue passes her drug test, thanks to Jules’ urine, and tells us that she “decided to stay clean. And I have been, for a while.” Yay, right? Well, there’s something else that’s complicating matters. “I didn’t know it at the time,” Rue says, “but Jules was falling in love.” Yeah, about that… 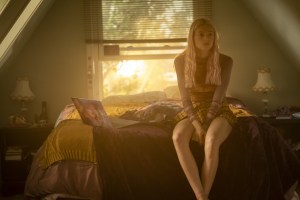 RUE RELAPSES | Jules is in deep with ShyGuy118, whom we know is Nate. And I’m pretty sure HE knows who SHE really is, but she definitely has no clue that her text-boyfriend is one of her classmates. She thinks his name is Tyler, that he goes to St. Mary’s and that he lives with only his mother. In a cool split-screen bit, we watch both of them go about their days with their phones glued to their hands, their sweetly intimate conversation unfolding at home, in school, in bed.

When a starry-eyed Jules tells Rue, she immediately dismisses him as a “f—kboi.” Jules immediately recognizes that her friend is jealous, but Rue maintains that she’s not. So they act like they’ve moved past it. There’s a funny interlude after “Tyler” sends Jules a photo of his junk (in an aside, Rue gives a tutorial on the different types of d–k pics) but then Jules asks Rue for help taking some artful semi-nude selfies, and Rue has a hard time keeping her cool. Couple that with the fact that Jules — whether or not she’s aware of the feelings Rue has caught for her — is incredibly physically affectionate, especially when she realizes that Rue has been clean for two weeks? Yeah, it’s no surprise when Rue (unbeknownst to Jules) grabs some prescription pills off Jules’ kitchen counter and then abruptly leaves. Outside she pops some of the meds in her mouth and then hops on her bike.

ENTER ALI | Rue rides to a NA meeting, and that’s when we realize that the meeting where she spoke is this one: She was on drugs while talking about being off of them. Outside, a man named Ali starts asking her questions about her sister and about whether she thinks Jia’s finding her will mess the younger girl up for life. Ali also completely knows that Rue lied about being clean. “Let me know when you want to stop trying to kill yourself,” he says, giving her his number. 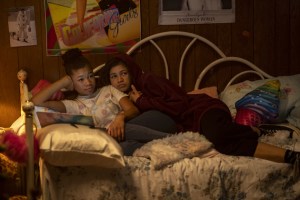 At home, Rue finds Jia watching My So-Called Life in her room and curls up alongside her. “Please promise me you will never fall for a Jordan Catalano,” Rue deadpans. “But he’s so cute!” Jia says, giggling. Aww.

But that moment of peace and calm is fleeting. The next day at school, Jules is excited because Tyler wants to meet her that night after the carnival. Rue doesn’t think this is a safe proposition. And the more she’s against it, the more Jules feels like her bestie is letting her down. It ends badly, so Rue goes to Jules’ after school to tearfully explain that she just doesn’t want anything bad to happen to her. Jules’ anger dissipates, and soon they’re hugging with their foreheads touching. There’s definitely a MOMENT, but when Rue seizes it and kisses Jules, the surprised blonde pulls away and Rue immediately panics, cries and leaves.

She makes a beeline for Fezco’s, where she bangs on the door and begs for him to sell her some Oxycontin, but he won’t let her in. “I’m not gonna help you kill yourself, Rue,” he tells her through the door. This sparks an angry tirade in which she calls him out on his hypocrisy: He was happy to help her get hooked on the stuff, and now he’s growing a conscience about it? “You f–king ruined my life,” she sobs on his doorstep. “The least you could do is open the goddamn door and fix it.” He’s clearly torn up, but he won’t grant her wish. (Side note: Wow Zendaya is so good in this episode, no?)

At the end of the episode, Rue pulls out her phone and calls Ali to see if he still wants to get “pancakes or something.” 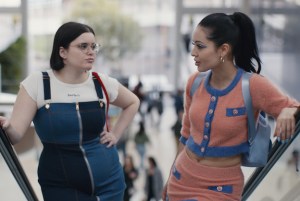 MADDY’S ON IT | Meanwhile, after Nate and Maddy have sex, she gets suspicious and decides to spy on his phone while he’s in the shower. She has no idea who he’s talking to — since he and Jules have been communicating through the dating app, it’s not super simple to see their conversations — but she knows something’s up when she opens the photo gallery and sees all the shots he’s taken of his Little Nate. She bails, giving him a made-up excuse for why she has to leave, and he’s none the wiser.

Her new benefactor refers to himself as “kind of an odd duck” who has some “extreme kinks.” Chief among them: the desire for a beautiful woman to mock him for his micropenis. Which we see, of course, because that’s how this show rolls. Kat is down for it, so he has a very good time while she’s laughing and pointing, and then he suggests that he be her “cash pig” who will pay her for lots of things, including whenever she wants to “fine” him for not doing what she says. 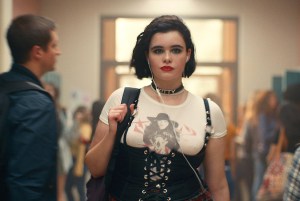 She uses the cash she makes to buy a new mini-wardrobe and arrives at school the next day sporting a much different look: fishnets, boots, corset-over-tee-shirt, dramatic makeup and a choker that reads “Kitty.” Sweet Ethan, who earlier in the episode bought her a grapefruit when she didn’t have enough money for lunch, gazes at her in wonder. “You look different,” he notes. “I changed,” she says airily.