There are mystical powers afoot in the premiere of Starz’s The Rook, but as the series’ protagonist Myfanwy quickly learns, you’ve gotta pay pretty close attention to get a sense of exactly what’s going on.

On the surface, Starz’s adaptation of Daniel O’Malley’s 2012 novel looks like a sleek, tense spy thriller. Agents representing a deep subset of a British governmental agency go on clandestine missions, following orders issued from a headquarters that gleams like an Apple Store. But then you meet the agent who’s a singular consciousness inhabiting four bodies, or hear about the existence of “Extreme Variant Abilities” (aka the means to do cool stuff like conduct electricity through one’s body without getting hurt), and it’s clear: We’re squarely in the real of the supernatural.

Ahead of Sunday’s premiere (8/7c), TVLine chatted with series stars Emma Greenwell and Joely Richardson. Read on to find out more about the show — including why both actresses say you need not read the book in order to enjoy The Rook.

THE PREMISE | Myfanwy (rhymes with “Tiffany”) Thomas wakes up near London’s Millennium Bridge not knowing who she is or why there are a lot of dead bodies all around her. Even weirder: The corpses are wearing latex gloves. She soon learns that she’s a shot-caller in the Checquy, a very secret agency full of people with paranormal abilities — and that someone wants her gone. 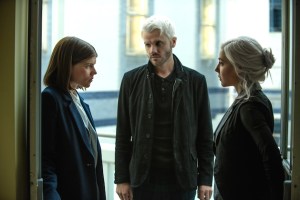 THE CAST | Greenwell (Shameless) plays Myfanwy. Joely Richardson (Nip/Tuck) is Lady Farrier, Myfanwy’s boss. Adrian Lester (Primary Colors) is Conrad Grantchester, who’s also wrapped up in Checquy business. Olivia Munn (The Newsroom) is Monica Reed, an American agent who arrives at the Checquy on business that may or may not be official.

THE CHANGES | The biggest difference between O’Malley’s novel and Starz’s adaptation of it is the tone. The book’s Myfanwy has a light, if slightly surreal, take on everything she encounters — including the notion that someone really wants her dead. The TV series is much darker, with Myfanwy continually on edge and unable to trust anyone that she runs into. “It’s like [the show takes] the premise, which is a woman wakes up without her memory surrounded by dead bodies, and then it’s totally different,” Greenwell says. “The book is amazing. It’s much more supernatural. There’s dragons and all these things, which sadly do not appear in our show. The television show tries to be rooted in reality and feel much more like a drama, a spy thriller with supernatural undertones.”

THE CLUES | Richardson cautions viewers to watch each Rook installment closely. “There were clues that you won’t necessarily pick up in one episode or two episodes. They pay off later,” she says, adding that Myfanwy’s return to her apartment in Episode 1, for instance, is full of visual tipoffs to what’s ahead. “It’s multi-layered.”