The National Rifle Association has shut down production at NRATV, amid concerns that the online news channel’s messaging had strayed from the organization’s core mission.

“Many members expressed concern about the messaging on NRATV becoming too far removed from our core mission: defending the Second Amendment,” NRA chief executive Wayne LaPierre said in a message to members, cited by the New York Times. “So, after careful consideration… we are undergoing a significant change in our communications strategy. We are no longer airing ‘live TV’ programming.”

The NRA has also cut ties with Ackerman McQueen, the advertising firm that it pays $40 million a year and which employs on-air personalities such as Dana Loesch, whose services will no longer be needed now that production on live content has ended. (Previously produced programming that sticks more closely to gun issues may continue to stream on the channel, the Times reports.)

Streaming services such as Amazon felt pressure in March 2018 to discontinue offering NRATV, in the wake of the Parkland school shooting and the gun control debate it re-energized. 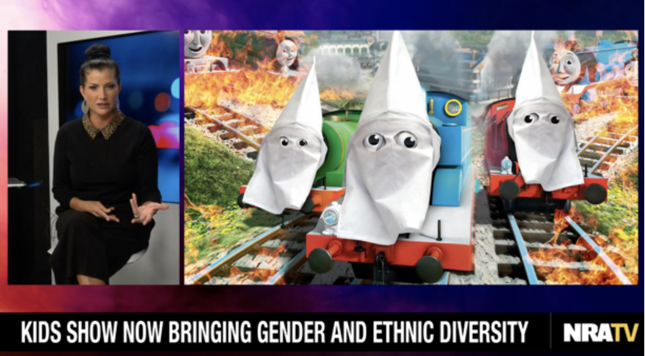 Amid already growing tensions between his organization and NRATV, which launched in late 2016, the NRA’s LaPierre was reported to be “livid and embarrassed” after a September incident in which Loesch — as part of an editorial about diversity on the children’s program Thomas the Tank Engine — had the train characters depicted in KKK hoods.

Said LaPierre’s key adviser, Marion Hammer, in March: “Wayne has told me and others that NRATV is being constantly evaluated — to make sure it works in the best interest of the organization and provides an appropriate return on investment.”