Sunday’s Fear the Walking Dead not only featured a pack of walkers being taken out in a new and fantastically splatterific way — big hint in the picture above — it also revealed just how sizable a secret the kids were keeping from our Good Samaritans and allowed Strand and Daniel to… Hmm. How to put it… It allowed them to address their past issues. And if you keep reading, I’ll tell you whether that meant Daniel made good on his promise to shoot Strand in the handsome face! 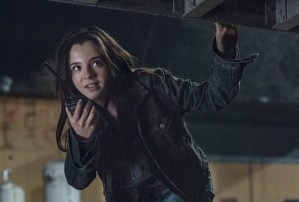 ‘YOU HAVEN’T CHANGED’ | After “Skidmark” opened with Daniel and his feline friend disarming a trap that had been set to gun down… walkers? Trespassers? Hard to say. Anyway, after that, Ofelia’s father burned October 12 from his page-a-day calendar, a meaningful gesture whose meaning we wouldn’t learn until later. (We’ll get there.) Later, Charlie snuck past his fence and hid in a car so that she could open the gate for Strand, Wendell and Sarah as soon as Daniel left. Only he drove off in the car with her in it! Next thing we knew, Strand, Wendell and Sarah had breached Daniel’s perimeter. “Where’s the six-pack?” asked Victor as he looked over the plane. “Brewski or abdominal?” Sarah replied. “‘Cause ya ain’t gonna find neither here.” No, what he meant was the plane gauges — he couldn’t fly it without ’em. Aw, crap — as anyone would’ve, Daniel had guessed that Strand would try to steal the plane and had taken them! What’s more, Daniel said via radio, he knew that Charlie was hiding in the back of his car. Not that she needed to worry. “I am going to save her,” he promised his nemesis, “from you.”

Back at the truck stop, when not asking questions about rather than reading The Little Prince, Dylan insisted to Morgan, Alicia and Lucy that Al wasn’t on the other side of the wall of growlers. He even gave them coordinates to the spot where he claimed a mysterious “they” who surely had Al had set up camp. So off went Morgan and Alicia, leaving behind Lucy and Dylan to fix the radio antenna and try to reach Strand… who, at that very moment, was sulking about his setback. “You just gonna sit there like a turd in a toilet?” asked Sarah, beseeching him to at least look around for the gauges that he needed. Meanwhile, Daniel and Charlie became, in a cautious way, fast friends. They bonded over music, and he admitted that he hadn’t been the one who set all the traps. Yet he was disarming them. Why? she asked. “You ask too many questions.” It was cute. Maybe not Negan/Judith cute but cute. Plus, I don’t feel nearly as icky about Daniel befriending a kid as I do Negan. 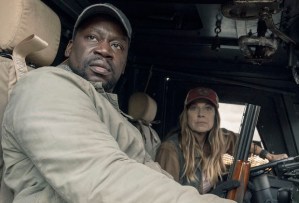 ‘WE FAKED THE WHOLE THING’ | As soon as Dylan got a minute alone, he radioed Max and Annie, and found out that the do-gooders had cut down some more of their growler fence. But they hadn’t, Dylan was able to assure them. So who had?!? Right on cue, Max and Annie spotted a man in uniform dispatching walkers and were forced to switch off the radio and hide. Worried, Dylan blabbed to Lucy and, via radio, Morgan and Alicia that he and his siblings had been lying the whole time. But now Max and Annie really needed their help. Those being the magic words, Morgan and Alicia set off to find the youngsters and saved them just before they became some walkers’ tween-flavored midday snack. Instead of a thank-you, our heroes got surrounded by enough weapon-wielding kids to stage a post-apocalyptic production of Lord of the Flies.

While helping Daniel disarm a trap at a small grocery, Charlie got out of him that he hadn’t killed the people inside, nor had he killed anyone at the warehouse. He’d inherited that from the person who had killed them, just so their things could sit on a shelf. Why were they still on a shelf? “It’s hard to find people these days,” Daniel said. Except, as she was quick to note, one had come to his door asking for help! Before the trap could be disarmed, Skidmark inadvertently enticed the walkers inside the store to come crashing through the front window. Since Daniel didn’t have enough ammo to take them all out, he and Charlie began slowly driving toward the warehouse, where he could quietly pick them off one by one through the fence. One small problem, though… Since Charlie hadn’t been around to open the gate, Sarah had driven a huge hole in the fence so that they could get the plane out! 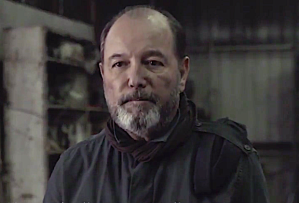 ‘I’M SORRY I TRIED TO KILL YOU’ | OK, new plan, Daniel declared. Charlie would speed off in the car, taking with her the plane’s six-pack, while he led away the walkers on foot with his boombox. It was a good plan, and it worked. But Strand couldn’t let Daniel sacrifice himself that way just to teach him a lesson. This wasn’t about what went down at the dam, Daniel insisted over the radio. It was about the way Strand’s lies had kept him from Ofelia until it was too late to say what he’d wanted to. (Not sure I see how Daniel risking his life to let Strand take the plane has a lot to do with that, but OK… I’m not one to question Daniel Salazar.) Eventually, Charlie made the obvious point that Strand & Co. wanted to help people, and Daniel needed help, so WTH were they waiting for?

After racing to Daniel’s aid, Wendell and Sarah discovered that the SWAT van’s machine guns weren’t working, so they couldn’t take out the walkers that way. Luckily, Strand, dragging the plane behind his vehicle, had a brilliant, gross idea: He turned on the plane and then just sat there while the walkers all conveniently walked directly into the blades. “Soup’s on,” cracked Sarah. “Get the ladle.” Afterwards, the plane was busted, we were told, beyond repair. But at least “I’m not gonna shoot you in the face,” Daniel assured Strand. Back at the warehouse, Daniel burned another day from his calendar and shared with Charlie what he’d been hoping to tell his daughter: “That every day brings a chance to start over, a chance to get it right,” he said. (So there’s the meaning of the gesture.) With that, he was off. “There’s a reason I’ve been here on my own for this long,” he explained to Charlie in a manner that really put forth no explanation at all. “I need to go and take care of it.” She offered to go with him, but he insisted that she stay behind with her friends and look after Skidmark. Whatever was in the warehouse was theirs, he said — except for a cigar that someone (had it been Strand once upon a time?) had told him to save for when things get better.

‘IF HE CAN DO IT, SO CAN YOU’ | Back at the truck stop, though Lucy was bummed to learn from Strand that the plane might as well be made of paper at this point, Dylan suggested that she could just do what the pilot in The Little Prince did and rebuild it. Out of the mouths of babes! Finally, Morgan and Alicia learned that the army of kids, who really meant them no harm, were the children of the deceased back at the campground. While they were all tromping through the woods, we got a bittersweet mention of Jenny and Duane, then suddenly, it was everybody down! A chopper appeared overhead with the same interlocked-circle logo that we’d seen in the premiere. The men in uniform had arrived in that, Annie told Alicia. So why did it now appear that they were leaving? “Maybe,” Annie suggested, “they got what they came for.” And I have to give her credit: She does have a gift for making everything sound ominous!

So, what did you think of “Skidmark”? The series’ sudden influx of whippersnappers? Daniel and Strand’s truce? And what unfinished business is Daniel off to complete? I’ve got no idea. You? Hit the comments.